I recently posted photos of an unknown aggressive-looking INSECT that I found in the coppice on Abaco. I could only get a partial shot of it, and I wondered whether to try to reach it and get a more complete shot. Perhaps I could have stroked its dear little back… or tickled its cute feelers…

I received various ID suggestions, ranging from the entomologically broad hedge-bet “big black beetle” to a more precise “black praying mantis”. I contacted the BNT to see what they thought. I’m glad I did. It turns out that this creature would be the hardest bastard insect on Planet Bastard. It is a SPIDER WASP of the Pompilidae family, almost certainly a TARANTULA HAWK aka PEPSIS WASP. It’s fortunate that I didn’t try to pet it or keep it in a matchbox. Note, for start, the scary eating apparatus… and it’s not nibbling leaves as I had thought, but chopping up a small insect. The leg claws and barbs are for pinning down its prey. You would not believe how unpleasant these little buddies are –  and that’s before we even mention the sting…

These wasps (family name Pompilidae) are known in some countries as “horse-killers”. There are many species around the world, with 6 subspecies, one of which being the Tarantula Hawk or Pepsis Wasp – so-called because it hunts tarantulas and uses them in a most ingenious and cruel way… NB The BNT have rightly pointed out that these insects are unaggressive to humans. If you leave them alone, they will spare you. I’ve also read “The tarantula hawk is relatively docile and rarely stings without provocation” Now read on to see if it’s worth provoking one

SPIDER WASPS are ‘Solitary’ insects that feed on ground spiders/ tarantulas by stinging them to paralyse them, then eating them. The females also make use of spiders for breeding purposes. They build a nest in a burrow, find a spider, paralyse it with their sting, drag it to the nest and lay a single egg on its abdomen. Then they seal up the burrow.

When the egg hatches the larva chews a hole on the spider’s abdomen and enters a living larder. It gradually eat its host as it grows. The spider’s vital organs are left till last, so that the spider stays alive as long as possible until the larva has reached full-size. After several weeks, the larva spins a cocoon and pupates (often over winter). Finally, the wasp becomes an adult, bursts Alien-like from the spider’s abdomen, and tunnels out of the burrow…

The sting of these wasps is among the most painful of any insect, though the most intense pain lasts on a few minutes. Entomologist Justin Schmidt bravely submitted himself to the stings of various insects and described this pain as “…immediate, excruciating pain that simply shuts down one’s ability to do anything, except, perhaps, scream. Mental discipline simply does not work in these situations.”

Schmidt produced his SCHMIDT STING PAIN INDEX The pain scale, based on 78 species, runs from 0 to 4, with 4 given for the most intense pain. Spider Wasps of the species Pepsis – i.e. Tarantula Hawks – have a sting rating of 4.0, described as “blinding, fierce, shockingly electric. A running hair drier has been dropped into your bubble bath” Only the bite of the Bullet Ant (not found on Abaco!) is ranked higher, with a 4.0+ rating, vividly described as “pure, intense, brilliant pain. Like fire-walking over flaming charcoal with a 3-inch rusty nail in your heel”

(Thanks to Erik Carey (BNT), Shelley Cant (BNT) and Dr Paul Deluca for their ID help and interest)

1. In 1989, New Mexico chose the Tarantula hawk wasp as the official state insect. The choice seems to have been left to schoolchildren and I’m guessing here (or gender-stereotyping) but I suspect it was the boys’ choice that won…

2. Tarantula Hawk is a “psychedelic progressive metal band” from San Diego, Ca. Their short discography includes their debut Tarantula Hawk (CD/LP, 1998); Burrow (Live CD, 2000, self-released); and Untitled. I’ll just check if… OMG!! you can even get these on iTunes… and (OMG!!!) Am@z@n. The cover of their debut provides the perfect ending for this post, vividly depicting the colour and texture of the swirling fiery pain you could experience (and I don’t really mean from listening to the music…) 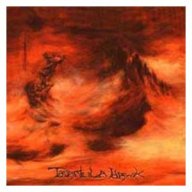 STOP PRESS 2 or 3 weeks on, I find that this entire post has been translated into Portugese! It can be seen HERE. It’s quite weird to read it, and I am tempted when I have a moment to re-use Google to translate it back into English. The two-way online translation game often leads to amusing results…