Velma Knowles is a resident of Nassau but originates from Abaco, where her grandparents lived. She is a keen photographer and birder, and recently spent a few days ‘back home’ on Abaco, staying on Man-o-War Cay during that strange ‘Christmas to New Year’ period that people have begun to refer to uncomfortably as ‘Twixmas’. Which I guess goes well with ‘Winterval’, if that neologism to describe the festive season rocks your sleigh.

Obviously, Velma had her camera with her; and a bit of quality birding was built into her schedule. Man-o-War has been having a prolific winter season, birdwise, with plenty of interesting migratory species passing through or settling there till Spring. But who would be content with a random warbler from the North, when there are Abaco’s specialist birds to encounter. Many of the birds featured – all are permanent residents – were seen on Man-o-War; others on the main island, though not actually at Delphi. Every bird shown can readily be found at Delphi, except perhaps for the Royal Tern, hence a few mentions. Let’s see how Velma did during her brief visit. (Spoiler Alert: very well indeed!).

A first ‘get’ for anyone’s Abaco checklist, and hence the header image. Not available on the Cays, so a trip to the ‘mainland’ and the wild pine forest and coppice of South Abaco is called for (they don’t venture north of Marsh Harbour). Rescued from the brink of extinction by careful conservation measures, the newly regenerating population of these unique underground-nesting parrots is gradually spreading, making them easier to find. During the day, Bahamas Palm Shores is a likely spot, as are locations to the south, including Delphi and the area around Crossing Rocks down to Gilpin Point. 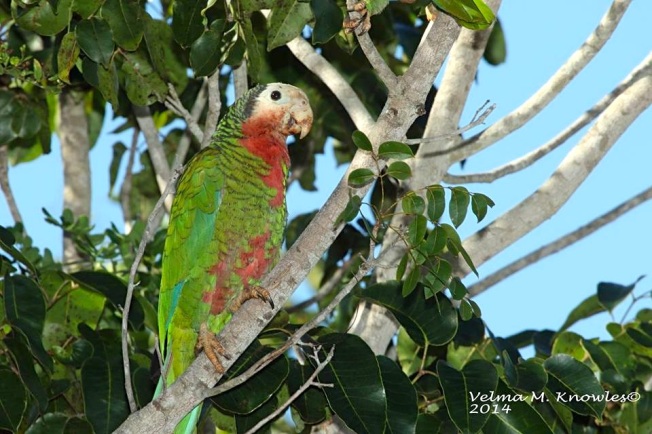 Abaco’s lovely endemic hummingbird, rather pushed around by the brash incomer Cuban Emerald and therefore tending to avoid  them (though both can be found at Delphi). The MALE CUBAN EMERALD has a striking purple throat aka ‘gorget’; the female (below) encountered by Velma has a more delicate colouring.

Unlike the Woodstar, these pretty iridescent green hummers are not endemic yet are more frequently encountered. They fly and change direction with astonishing speed, and are feeder-keen! Your sugar-water feeder will also attract Bananquits (pointy curved beak for the little holes) and West Indian Woodpeckers (long tongue) – and possibly Woodstars.

Splendid and occasionally noisy birds that nest in boxes under the eaves at Delphi. They produce two families a year. Velma writes “It has been a long wait but I finally saw this lifer, the West Indian Woodpecker. This bird is only found in The Bahamas, Cuba and the Cayman Islands. Awesome call!”

Velma writes “One of my targeted birds, the Western Spindalis, formerly called the stripe-headed tanager. On the way from the airport we spotted him on the side-of-the-road. Now that’s island-birding!” 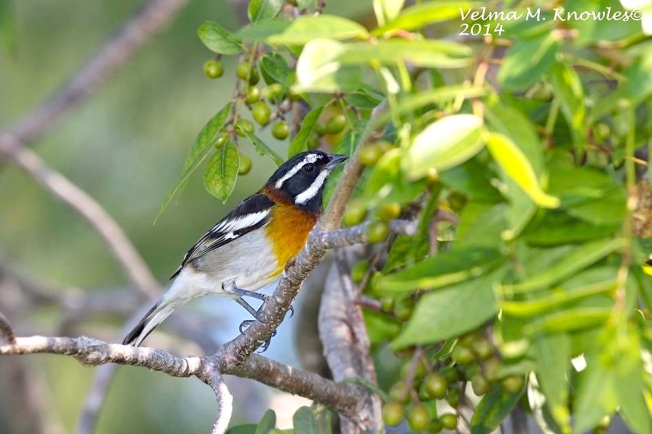 One of my own  favourite small birds. Irresistably cheery, busy and ubiquit(-ous) 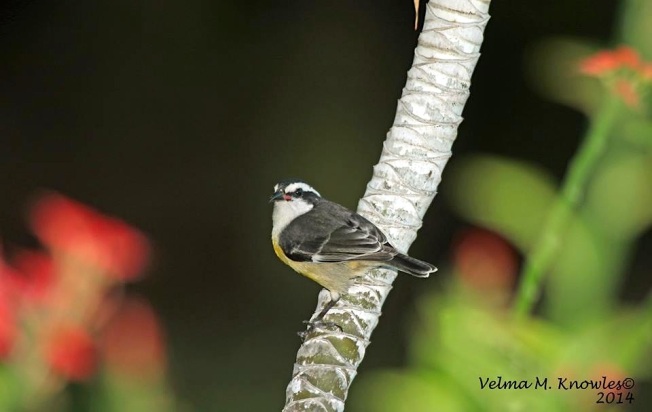 Velma writes “Such a beautiful call… the Thick-billed Vireo. We heard a number of these guys on our bird-walks. The Thick-billed Vireo is a Caribbean endemic, being restricted to The Bahamas, the Caymans, the Turks and Caicos, two islands off of Cuba and one off of Haiti (though it has been reported in Florida)”

The adult male’s striking colour patches are orange-red; the female’s are more yellow. They are greedy at the feeder and rank high up in the pecking order, where smaller birds defer to them. One local name for them is ‘Police Bird’: the adult male’s colouring matches that of a Bahamian Police Officer’s uniform.

At 770 feet, this dock is the longest in the entire Bahamas

All photos: Velma Knowles, with thanks for use permission

11 thoughts on “FESTIVE BIRDING ON ABACO WITH GUEST BIRDER VELMA”