MOTHS HAVE NOW BEEN AWARDED THEIR OWN SUB-PAGE HERE

The Hammock Skipper Polygonus leo is quite a small butterfly. We found the ones shown here in the vegetation at the back of the Delphi beach. I can’t remember noticing one before, but I found an old photo of one in my archive.

Perhaps unusually for butterflies these skippers are sexually ‘monomorphic’, i.e. very similar in both sexes. Males and females both have completely dark brown wings except for the small white spots. We noticed that these were (again, unusually?) not symmetrical as between the wings. [That should probably be ‘not reflectively symmetrical’, as with a Rorschach inkblot.]

The hammock skipper has a broad range in North America from west to east coast; north into Canada; and south to Florida and the Bahamas.

You can see a cousin of this species, the long-tailed skipper, later on this page 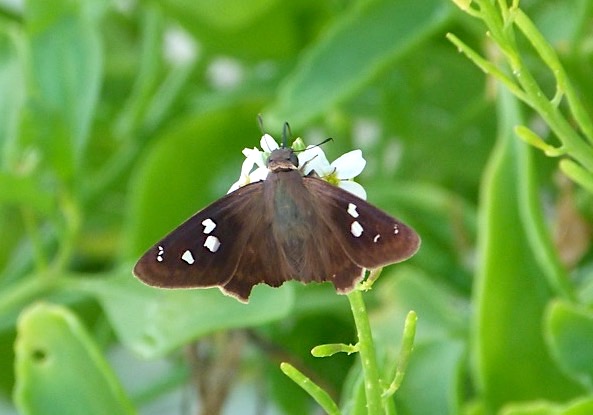 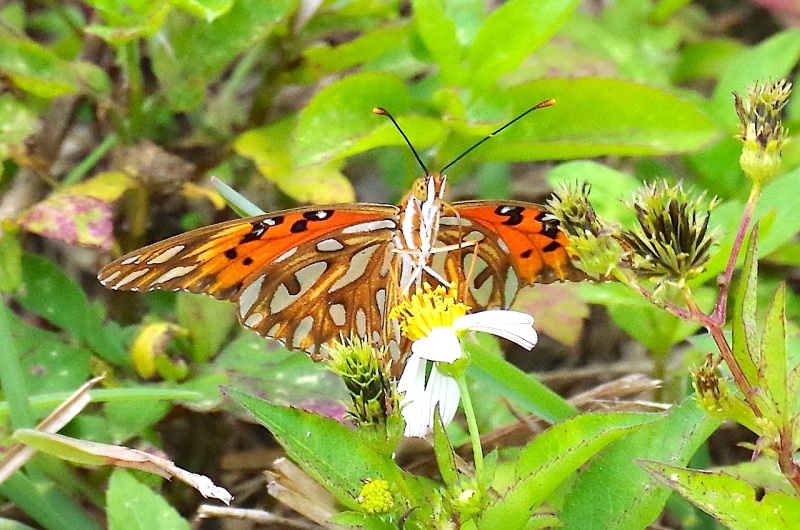 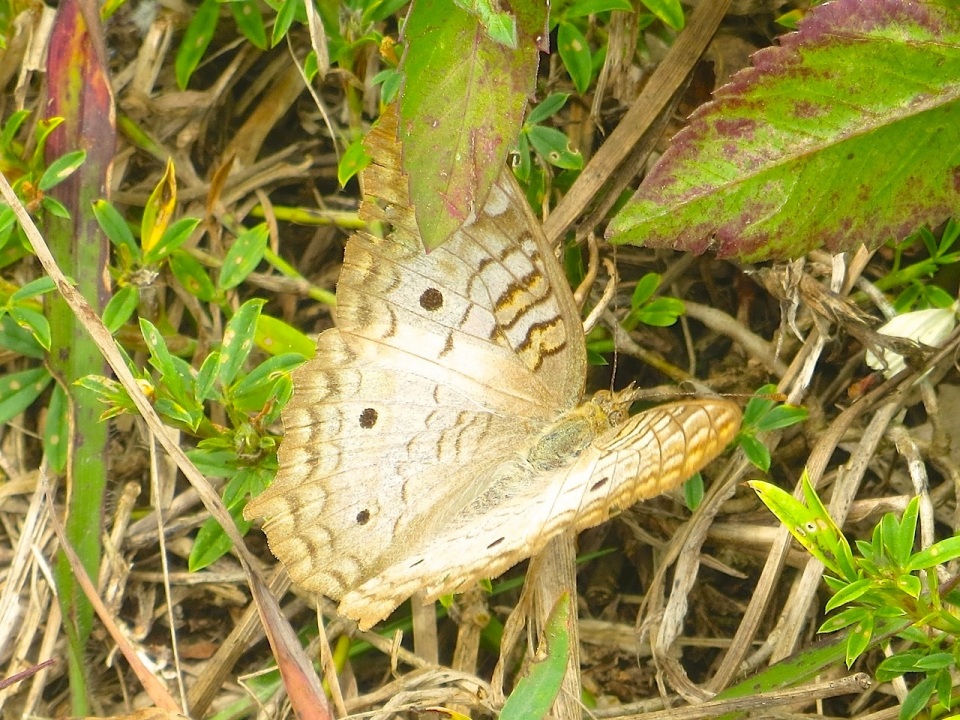 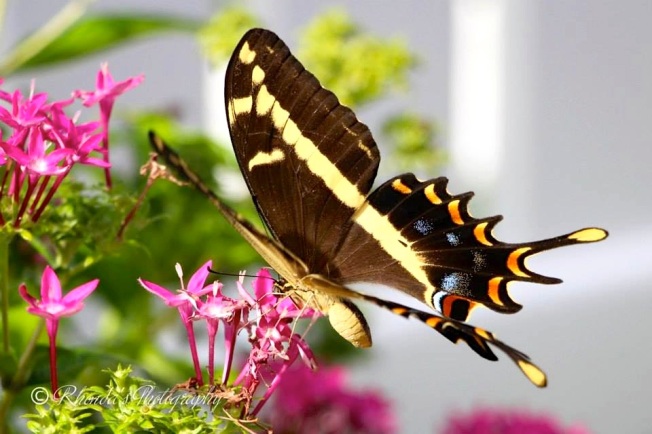 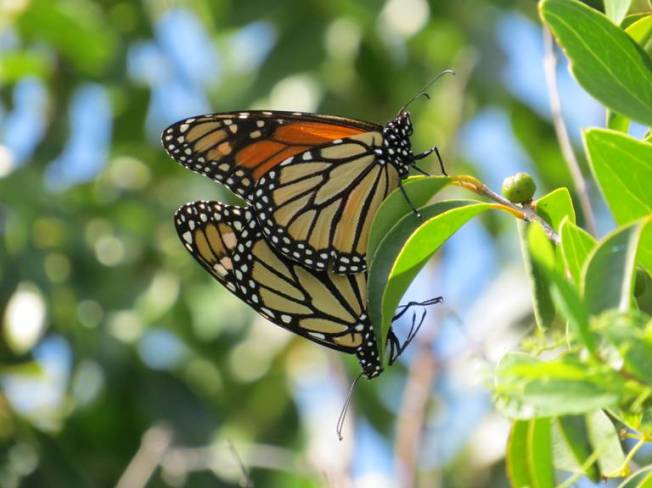 A wonderful photo by Abaco resident Becky Marvil that makes an excellent header image for the butterfly page. There are more monarchs below.

Many of the butterflies of North America are found on Abaco (or may be it’s vice versa?).  This gif is a helpful general ID chart to begin with (credit: tabletopwhale.com / Eleanor Lutz)

I wish I could tell you something useful about this butterfly, but frankly there’s not a lot of info about it to be found. In part that may be because it is not a mainstream American butterfly, being found only in southern Florida. However it is found in the West Indies, and indeed on Abaco – this one was photographed by Nina Henry at Little Harbour. She was walking from Pete’s Pub to the OLD LIGHTHOUSE when she came across this butterfly. She sent it to me as a query and it took me an hour to nail the ID – there are other very similar and more common hairstreaks that threw me off track for a while (I thought it might be a female… oh, ever  mind, it wasn’t).

The Martial Scrub-Hairstreak Strymon martialis ranges from the southern tip of Florida, throughout the Bahamas and Greater Antilles. I’ve never seen one on Abaco, and I’d be very interested to hear from anyone who has. As far as I can make out this creature’s range tends to be further south, so I’m guessing they are unusual  for Abaco. Prove me wrong! 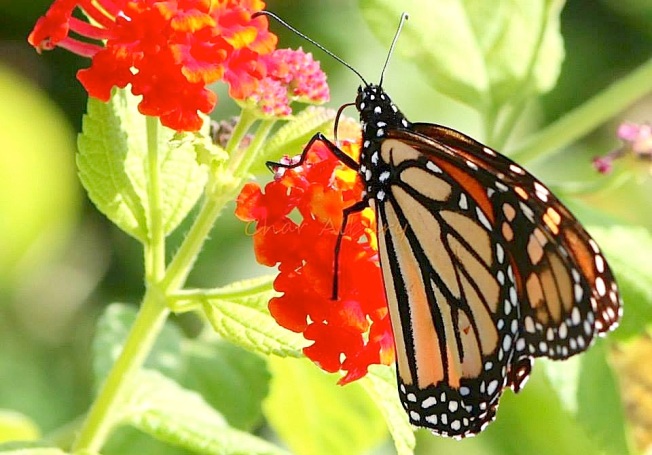 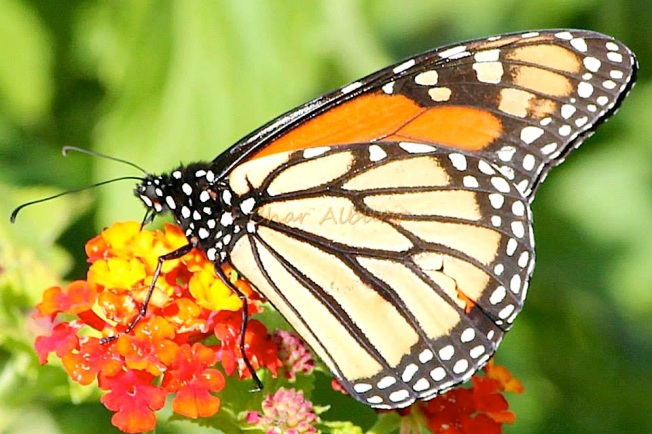 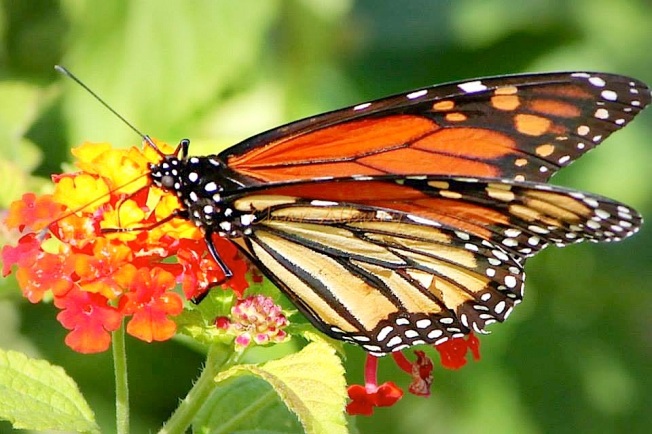 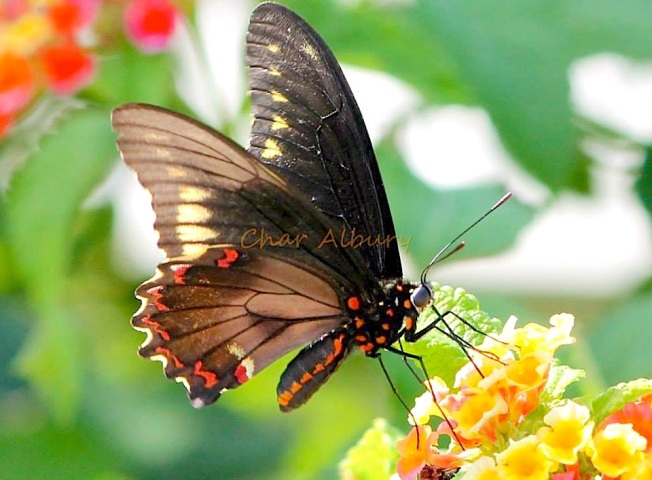 Uli Nowlan has had two beautiful swallowtail butterfly species in her garden at Treasure Cay. These are absolute stunners, with great camerawork to capture the details. 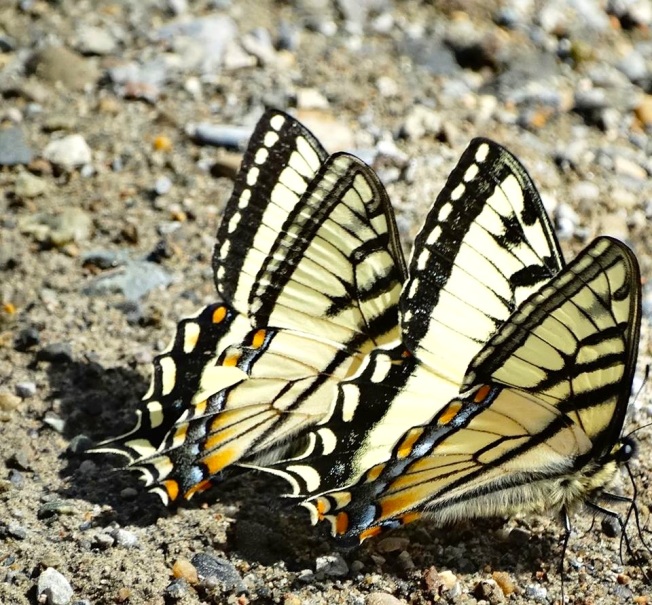 At first glance the Common Buckeye Butterfly Junonia coenia looks unpromisingly drab. However, like many butterfly species, the outside appearance is only one side of the story, a facade to enable it to blend in with the scenery. As the header image suggests, this creature has a more more flamboyant and colourful side to it – a feature not confined to butterflies, and extending even to humans…

As it feeds, or as the sun warms its wings, the buckeye will start to reveal itself

The bright eye-spots of the buckeye, for which it is named, are designed to deter predators, as much as for decorative purposes. Birds, in particular, are thought to be put off by a creature apparently possessing 3 pairs of eyes. 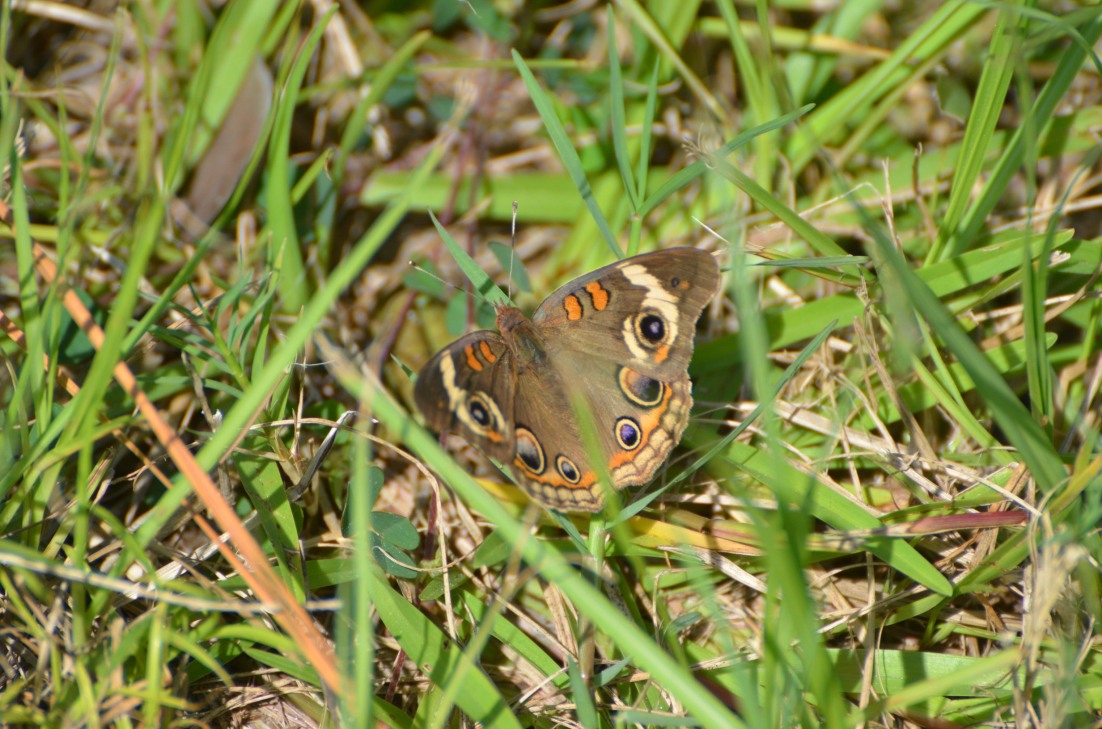 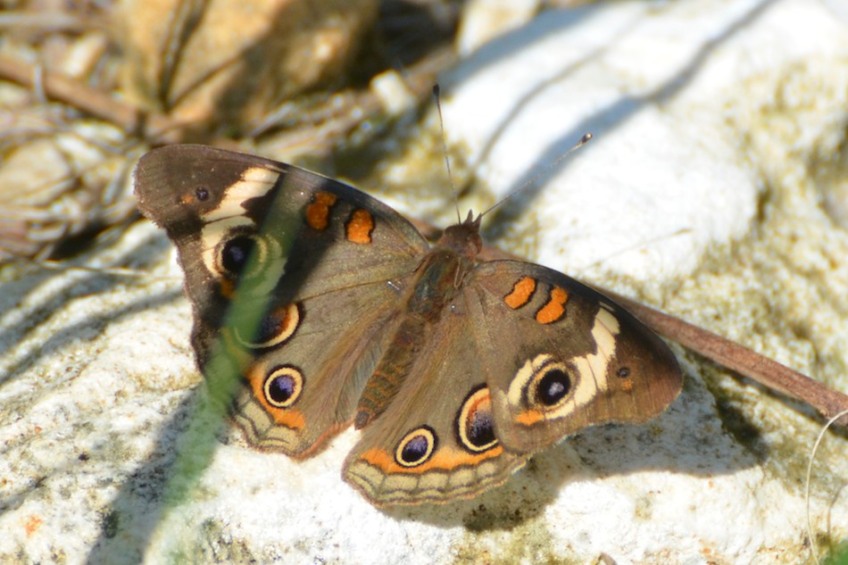 The caterpillars and chrysalis of this species look like this 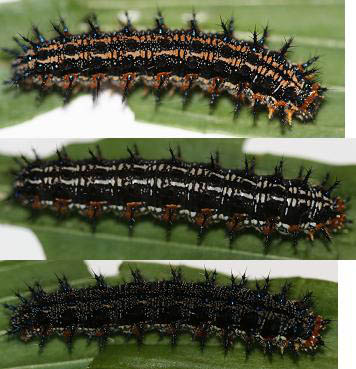 This rather charming illustration of the buckeye species is by Jacob Hübner from his Sammlung exotischer Schmetterlinge Vol. 2 ([1819] – [1827] (Plate32)

Also in this series: ZEBRA HELICONIANS and GULF FRITILLARIES

The GULF FRITILLARY Agraulis vanillae is a so-called ‘longwing’ butterfly species found from South America to central North America, named for its migration route over the Gulf of Mexico. 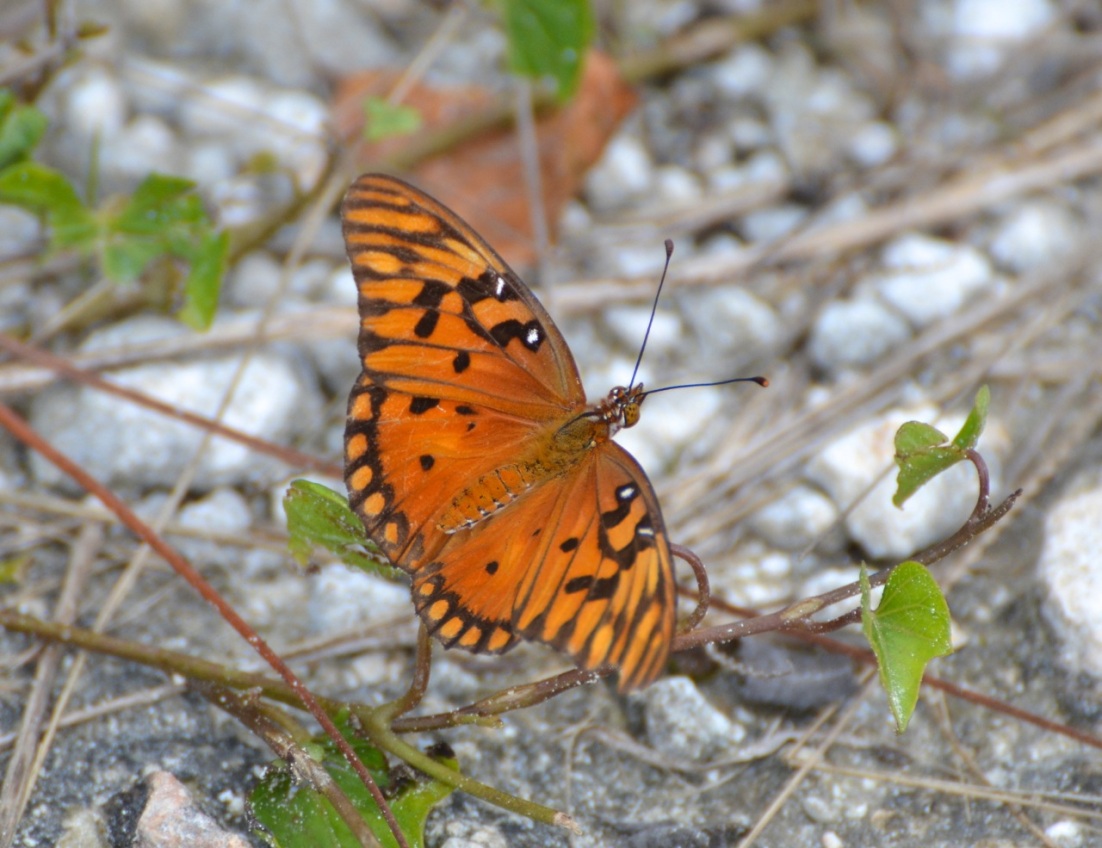 The black and orange patterns of this butterfly are a reminder to predators of the toxicidity of its stripy caterpillar  and birds tend to leave them alone. Just in case. The markings are also similar to other butterflies that are poisonous – for example the Monarch.  Tip of the hat to Wiki for the information that “this species belongs to the ‘orange’ Batesian mimicry complex”. Me neither! It is where an innocuous species resembles a noxious one in order to discourage predators without going to the bother of actually developing its own ‘on-board’ toxins. 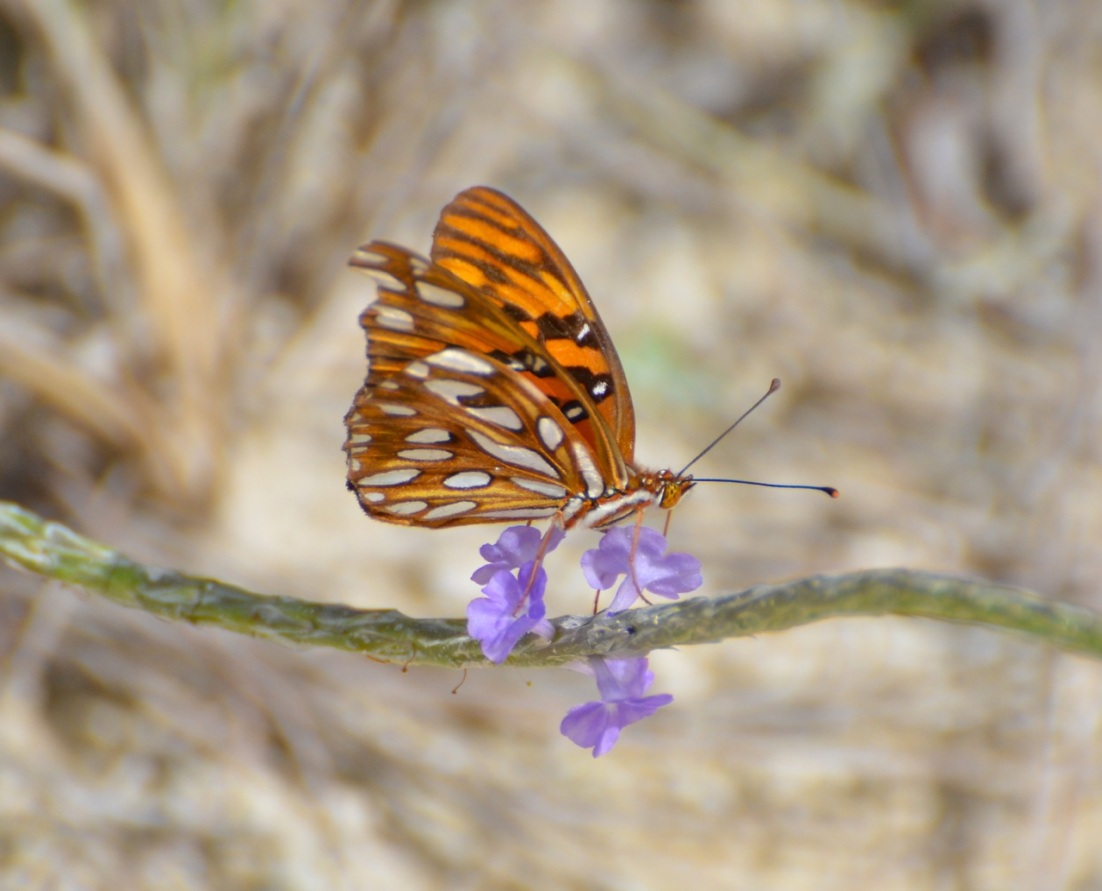 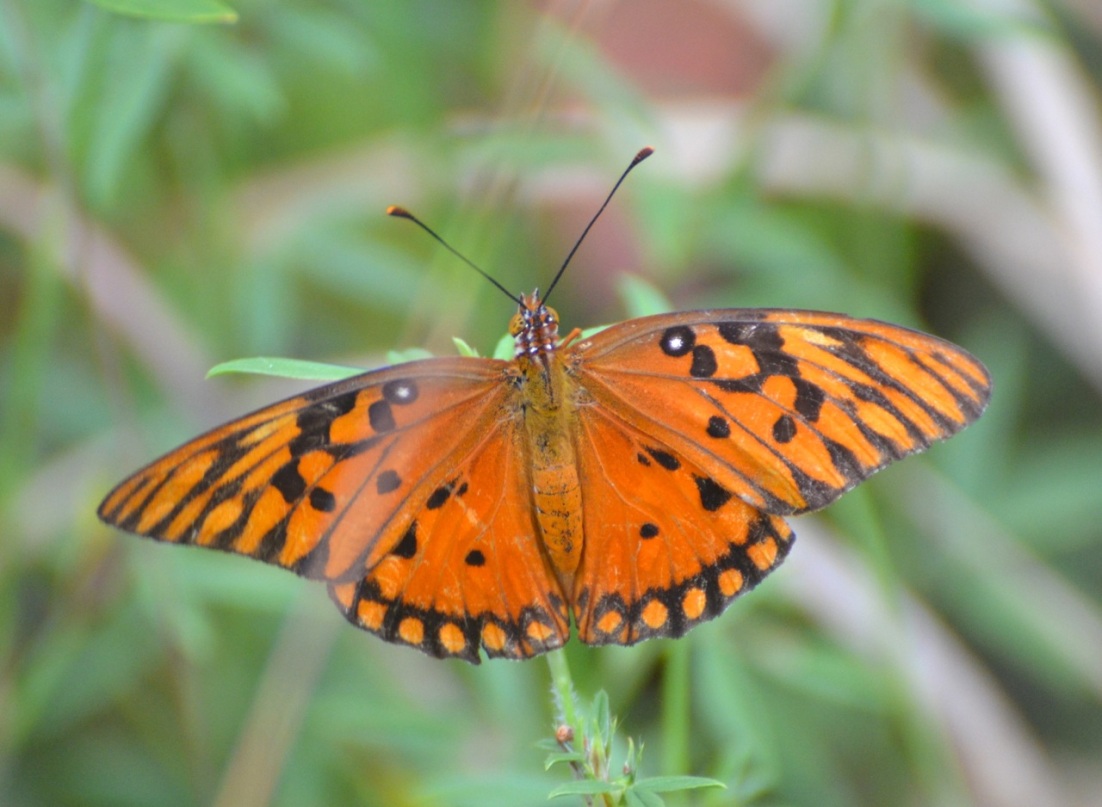 The gulf fritillary is common on Abaco, as elsewhere in the Bahamas. I particularly fond of the photo below, in which the whole feeding apparatus can be seen. I haven’t done my homework, I’m afraid. If anyone wants to provide the technical terms (mouth? proboscis? tongue-thing?), that would be welcome. Please use the comment box to spread enlightenment. 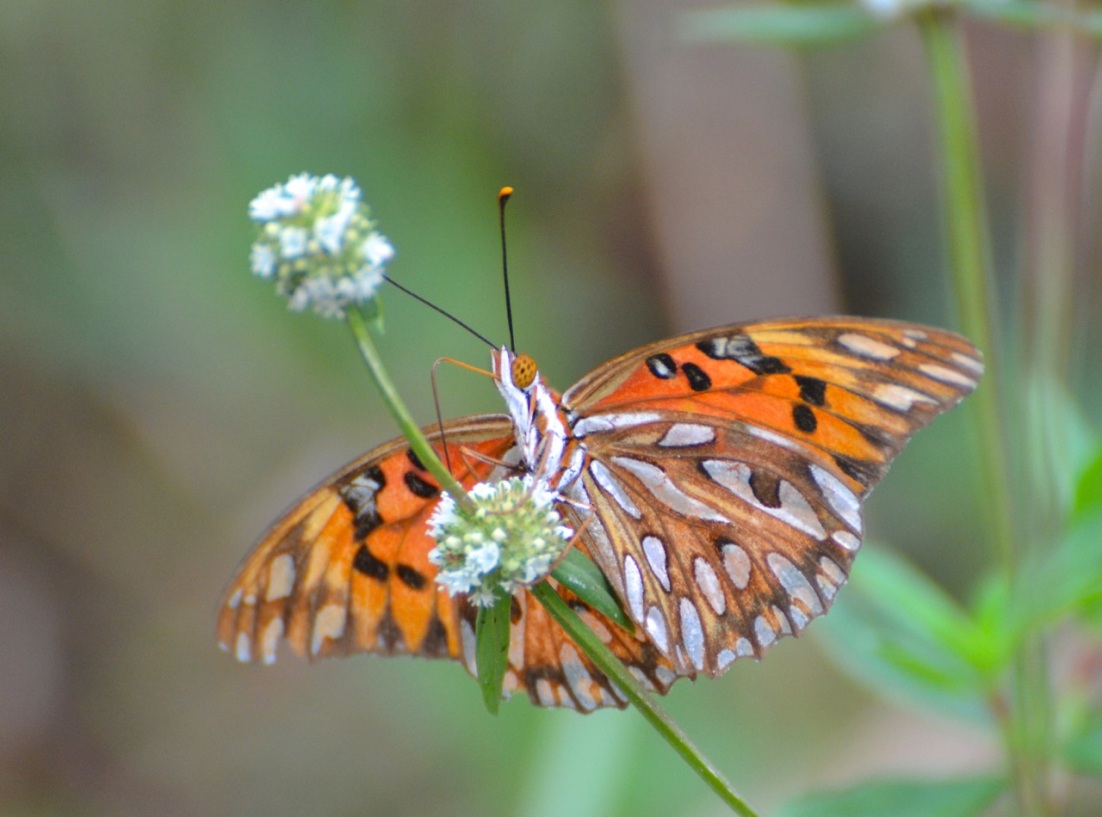 FURTHER BUTTERFLIES YOU MAY ENJOY

Credits: all amazing photos by Charlie Skinner, except header image Wiki – to which credit also for the graphic and some info in particular ‘Batesian Mimicry complex’, which is definitely one to drop lightly into conversation…

The Zebra Heliconian butterfly Heliconius charithonia is also know as the Zebra Longwing.  These striking butterflies roost nightly in large colonies, a species behaviour that is believed to be a protective measure against predation, providing safety in numbers (or at least reducing the probabilities that you will be the one to be eaten). In 1996 the Zebra Longwing was appointed the State Butterfly of Florida.

Credits: all images by Charles Skinner, taken in the vicinity of the Delphi Club, Abaco

It’s hard to resist another fly-past for the Atala Hairstreak Butterfly Eumaeus Atala . So I won’t. Once seen, never forgotten. They are small wonders, with their plump orange abdomens and their striking blue-dotted motif; obvious candidates for a signature Rolling Harbour logo for insect posts. 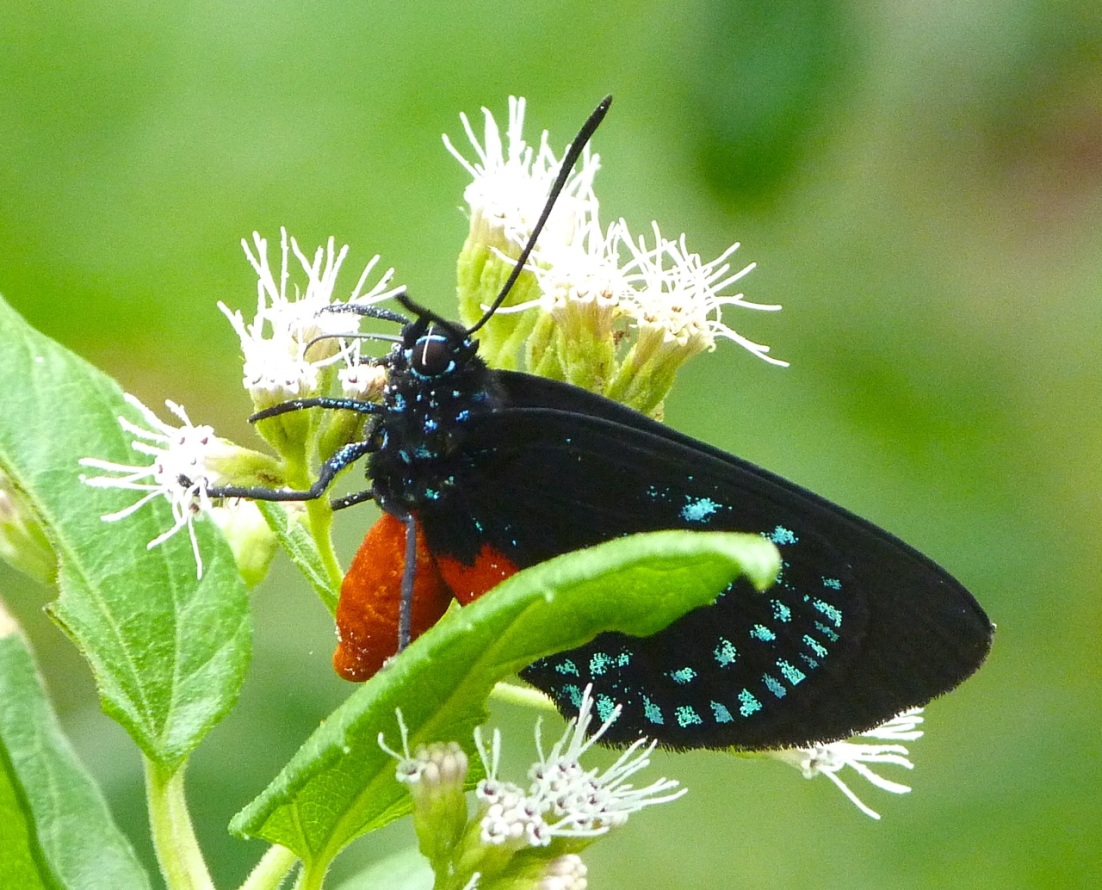 This close-up in particular shows clearly that the vivid blue markings are not confined to the Atala’s wings. They are also on the body, the head, and surprisingly on the legs as well. 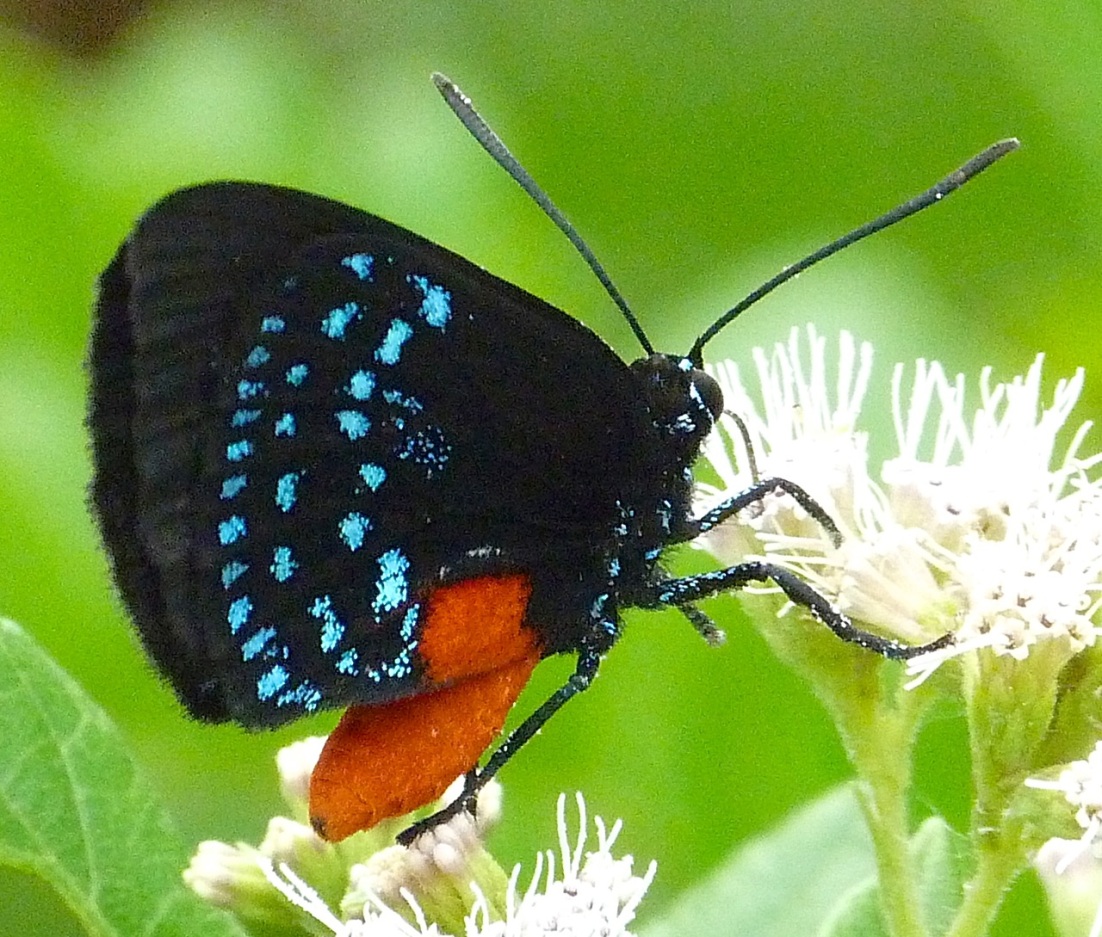 It is rare to see the inside of an Atala’s wings. In flight they tend just to look black; then they land with precision and closed wings (zeugma score!). In sunshine the spots of the feeding Atala shine out like small LEDs. They very rarely open their wing to reveal the velvety blue upper sides.

As I watched the single Atala, a second one arrived and almost immediately ‘jumped’ the first. By which I mean that, for a few seconds, the new arrival ‘covered’ the feeding Atala in every sense of the word. Please consider this a blurry study of the upper side of an Atala’s wings, and politely ignore the intrusive circumstances. This is not a scandal blog. Yet. Mere moments later, it was all over **. I made my excuses and left.

These events may have piqued your interest in the life cycle of the Atala. Some months ago I posted in detail about this, with the whole process illustrated from eggs, larvae, caterpillar and chrysalis to the emergent butterfly. At the end of the post are some helpful links. CLICK LIFECYCLE OF THE ATALA HAIRSTREAK

Finally, you may want to get a sense of size for this butterfly – crops and zooms can sometimes give a distorted impression. So here is a normal snap of the butterfly feeding. 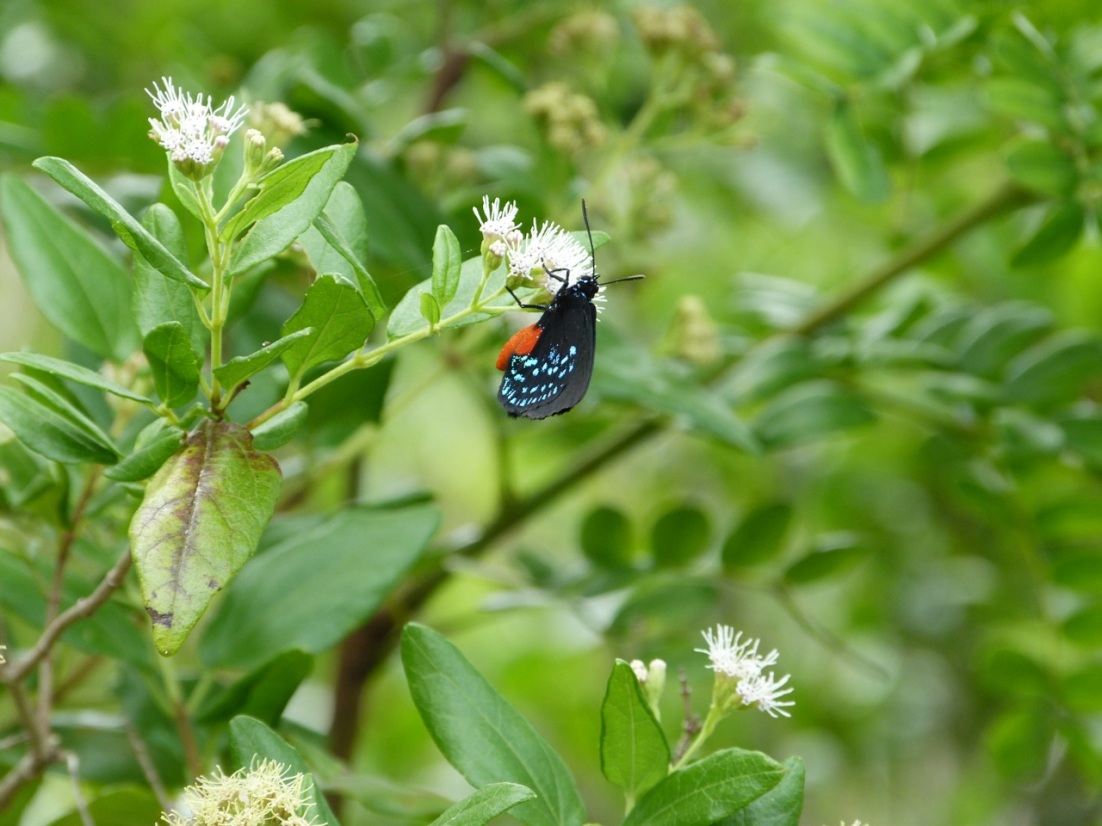 **My spam box is full of suggestions about this

ATALA HAIRSTREAK a small but unmistakable butterfly that is a creature of delicacy and beauty. It is the one that features in the RH logo above. Here is a live specimen taken deep in the pine forest  a few days ago at the Blue Hole known as Sawmill Sink. The colouring is just as it is in real life – there’s been no ‘work’ done on this image. Its little curly tongue shows that it is busy feeding. Click on it to enlarge it. 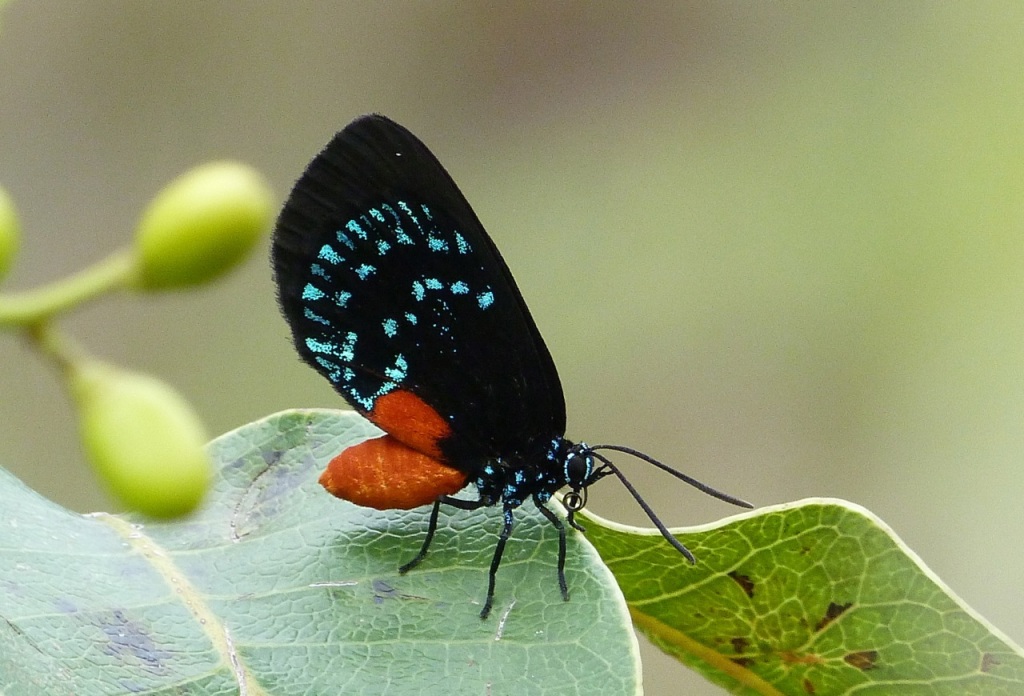 Apart from the plentiful bird species to found all around the Delphi Club, there’s the strange half-way house between insect and bird that is the HUMMINGBIRD MOTH Hemaris Thysbe. These can be seen – and heard – especially at dusk hovering around the flowers in the garden, sipping nectar. In the half-light they are sometimes confused for tiny birds. I have seen them most clearly when they are busy among the flowers in the beds on either side of the main staircase. So far I have not managed to get a reasonable photo of one – a situation I hope to put right very soon. Meanwhile, I have found some wonderful pictures, not from Abaco, on a website related to a Research Program at Miami University . They were taken by Dr Hays Cummins, to whom thanks for use permission. These and other outstanding images can be found at his comprehensive website, for which CLICK===>>> HERE

To see the sideshow of the images CLICK THIS IMAGE

Kasia has recently sent me photos of the regenerated vegetation in the pine forest along the drives, following the major wildfires last March. I’ll post some comparative pictures soon. During her circuit, she took some other photos including the two butterflies below. Of note is a vivid example of the Atala Hairstreak, my favourite butterfly, which I have never seen on the drives.

Thanks to PM for his butterfly ID suggestion (see Comments). I was cautious about it because the butterfly in question did not seem to have anything that could be described as a wing-tail. However some more research came up with the information that the Polydamus is the only ‘tailless’ swallowtail in the United States. I then found the excellent butterfly section of the website of the Conservancy of South West Florida, where there is a clear photo of the butterfly that wouldn’t keep still for me. Due credits to the site and photographer, and see LINK added to the BLOGROLL. Grudging credit to PM also.

As a change from birds, here are some other flying items, mostly from around Delphi itself, with a redesigned logo in their honour. 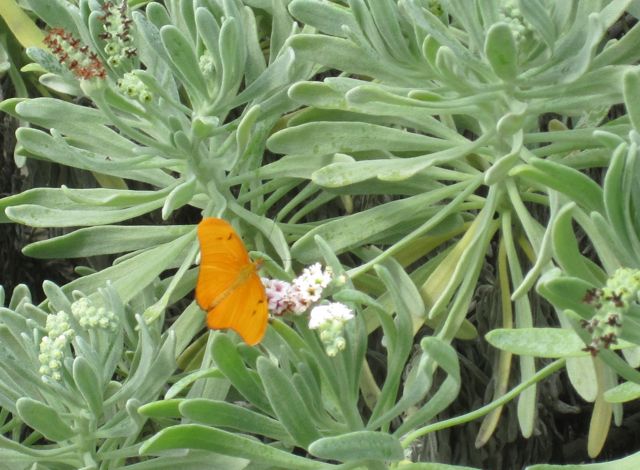 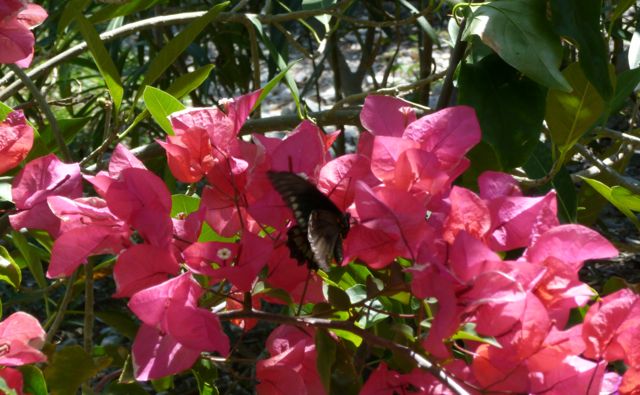 See later post for ID as GOLD RIM SWALLOWTAIL / POLYDAMAS SWALLOWTAIL (Battus Polydamas Lucaeus) Seen all round Delphi this March. These are on the move the whole time, and are surprisingly hard to pin down (not a very sensitive way to put it for a butterfly…) The bottom photo looks like a rubbish picture, I know, but in fact the butterfly is at rest (look! the body / legs / feelers aren’t blurred) while the wings beat fast and constantly while it feeds

AND FINALLY… Pride of place goes to this Atala Hairstreak, photographed during a Delphi outing with Ricky Johnson to one of the Blue Holes in the pine forest. It’s the only place I have seen these small butterflies, and there were only four or five. This one stayed still for just long enough. This photo is the one used for the new butterfly logo for this page