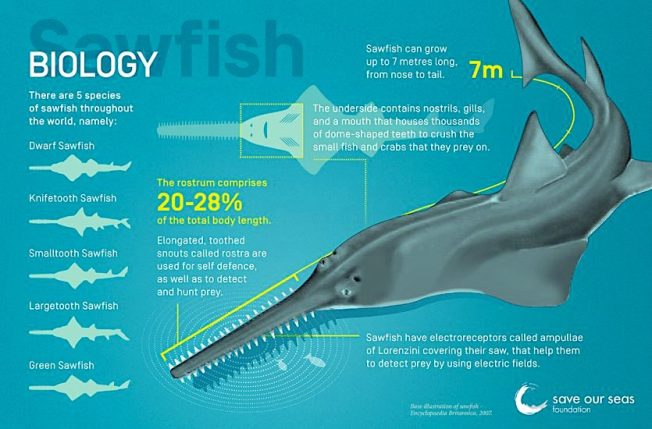 SAW FISH IN THE ABACO MARLS? NO SURPRISE. SAW A SAWFISH? AWESOME!

Exactly a year ago, an extraordinary find was made out on the Abaco Marls. Almost disguised against the pale mud under the low water was the first sawfish reported for the Marls. This fish is not merely a rarity in the Northern Bahamas: all species of sawfishes worldwide are IUCN listed as Endangered or Critically Endangered.

Here is an account of the discovery reported by FRIENDS OF THE ENVIRONMENT: “On a recent fishing trip in the Marls with local guide Justin Sands, Sam and Jacque Cannon had an exciting encounter. As Justin was poling the flats, with Sam on the bow searching for bonefish, Jacque spotted a Sawfish! Jacque and Justin quickly forgot about Sam and his efforts to catch a bonefish and turned their focus to the Sawfish. This is a very rare sighting and one we are happy there was a camera available to document it…” A couple of weeks later I was lucky enough to sit next to Jacque at dinner at the Delphi Club, so I was able to hear at first hand the story of this amazing find. It also turned out to be the perfect time to sign an early copy of “The Birds of Abaco” for Jacque and Sam… 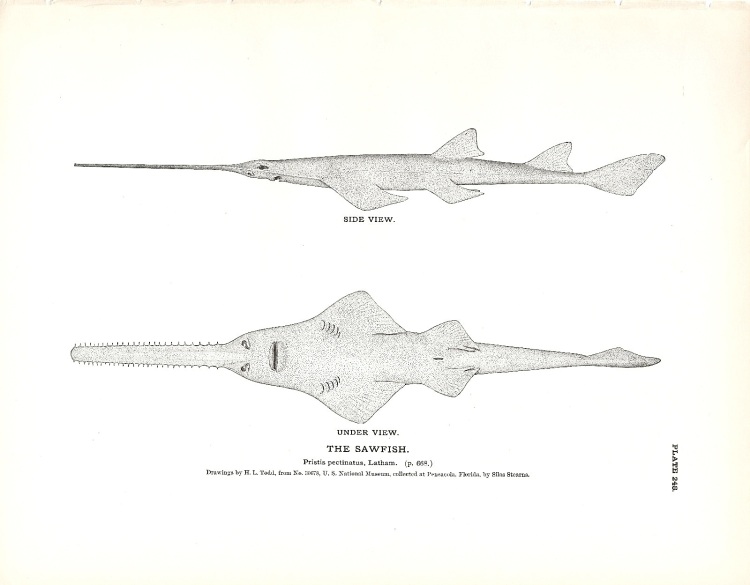 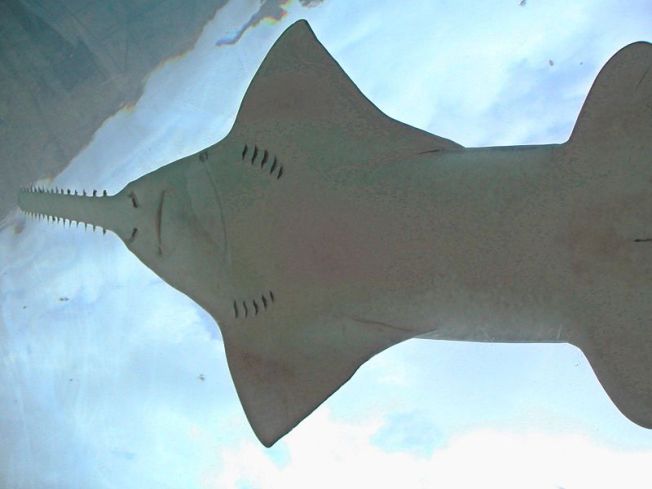 Other sawfish have been seen recently in the Northern Bahamas, though not in Abaco waters. Last summer the Bahamas National Trust posted 2 great images of a Smalltooth Sawfish, saying “BNT was excited to receive these photographs of a Smalltooth Sawfish photographed in the proposed East Grand Bahama National Park – Bersus Cay Area. The sawfish was 12 to 13 feet long and was seen in water that was 2 -3 feet deep. Thank you to Buzz Cox, Island Manager at Deep water Cay for sending us these photos”.

POPULATION DECLINE As noted above, Sawfish populations have declined to less than 10% of historical levels. The Smalltooth Sawfish – seen above – was once prolific in the Atlantic, Gulf of Mexico, Mediterranean, Black Sea and Indo-Pacific. Population numbers of this species are now estimated at less than 5% to perhaps as low as 1% of their historic levels.

THREAT TO SURVIVAL The threats to their existence are many: habitat loss, overfishing, accidental bycatch, rostrum souvenir hunters (good prices can be obtained), taking them for fins (as a delicacy) or oil from their liver (medicinal).

LEGAL PROTECTION Capturing a sawfish is illegal in certain countries, including the United States. The sale of smalltooth sawfish rostra is prohibited in the United States under the Endangered Species Act.  The import for sale of that of any sawfish species is also prohibited. The international trade of sawfish was banned by the CITES convention in June 2007.
For those that want to find out  a bit more detail about these issues, there’s plenty on interesting information in a scientific (but readable) paper from NOAA – click the link below
SMALLTOOTH SAWFISH NOAA PAPER

Time for some footage of these rare and wonderful creatures in the Bahamas. The first is from John Flanagan and was taken during a dive off Bimini in early 2014. He was so surprised by the sight that he nearly forgot to turn on his camera to take a short video… The second is a longer 5 min video taken off Andros by Grant Johnson of “wild footage of the critically endangered Smalltooth Sawfish (Pristis pectinata). The west side of Andros, Bahamas is one of the last places on Earth that still provides vast refuge for this incredible animal”.

Finally, you may be wondering how exactly the sawfish uses its rostrum to stun fish, as mentioned earlier. Watch this short video – see how quickly it moves, for such an apparently cumbersome and dozy creature… [https://www.youtube.com/watch?v=itGM1yU0NWk] Credits as shown above, with particular mention of Jacque Cannon for probably the first known sighting and anyway photo of an Abaco sawfish…; header pic in aquarium Diliff (Wiki)

From the Sun Sentinel in the USA: (Props to the DearKitty Blog)

SIGNS OF HOPE FOR ENDANGERED SAWFISH?

Approaching Port Everglades in a helicopter, Ryan Goldman peered down at the water and saw a ray swimming at unusually high speed. Behind it, he spotted two large and bizarre-looking predators: the endangered smalltooth sawfish, which use their long, serrated bills to hunt prey. The two 12-foot-long fish swam out of the inlet as the helicopter circled and Goldman, a biologist for Broward County who was in the air to count manatees, took photos.

The sighting in March may provide further evidence of a modest resurgence of one of the world’s most endangered fish, a giant that that can reach a length of 18 feet. Although they resemble sharks, sawfish are a species of ray. They use the saw, known as a rostrum, to slash at schools of fish and dislodge prey from the ocean floor.

Once ranging across the coast from North Carolina to Texas, the smalltooth sawfish has been reduced to a core habitat along the coast ofEverglades National Park, the Florida Keys and southwestern Florida. Although the species can be found along the coasts of other countries, the U.S. population is believed to be isolated.

“They are the largest species of in-shore fish that anybody’s going to see,” said George Burgess, director of the International Shark Attack File, who is compiling a database of global sawfish sightings. “It’s bigger than any of the sharks, bigger than any of the groupers. … Its recovery as a species in the United States is totally dependent on what we do in Florida. We as Floridians have a special obligation to save the species.”

In the past few years, sawfish have been turning up more frequently in parts of their old range. Divers have encountered them in submerged wrecks off Jupiter. One turned up in Port Everglades in 2012, although it was dead and tangled in a fishing line.

“We’re seeing signs that the population may be recovering slowly,” said Dean Grubbs, associate director of research at the Florida State University Coastal & Marine Laboratory, who has placed satellite tags on the sawfish. “We are seeing some animals showing up in the Florida Panhandle, Alabama, the east coast of Georgia. We would expect, if the population continues to recover, for them to show up in Louisiana, South Carolina and North Carolina.”

On a recent spearfishing dive north of Jupiter Inlet, Jim Fyfe saw two sawfish, one about 12 feet long, the other 14 feet. A video posted on YouTube shows each sawfish resting on the sandy ocean floor in about 75 feet of water. When Fyfe approached, they stirred and swam off.

In addition to spreading out to new areas, Burgess said, “we do have hints that there are more of them” in their core range. But Gregg Poulakis, a biologist with the Florida Fish and Wildlife Conservation Commission, said he isn’t sure a recovery is underway. “I think it’s a little too early to tell,” said Poulakis, who has done years of field research on sawfish. “There’s no analysis I’m aware of that shows the population is increasing. They’re stable for sure.”

The decline of sawfish was largely because the fish were accidentally caught in commercial fishing gear, such as longlines and shrimp trawls. They also have been caught by recreational fishermen who cut off the rostrum as a trophy. Another cause of decline has been coastal construction, which destroyed the red mangrove coastlines that sheltered juvenile sawfish.

But several protection measures have gone into effect, both before and after the sawfish was designated an endangered species in 2003. In 1994 Florida banned the use of gillnets, large commercial fishing nets that hang vertically in the water. Sawfish habitat around the Keys and Everglades National Park received additional protections. And a public awareness campaign reminded recreational anglers it was illegal to kill sawfish and they should avoid harming any accidentally caught.

“People used to catch them, cut off the saw and throw the fish overboard,” Grubbs said. “People probably still do that, but for the most part that has ended.”

Countering this positive trend has been the rise of social media, which has led many to post photos and videos of themselves on YouTube, Instagram and other sites catching sharks, sawfish and other marine creatures, said Sonja Fordham, president of Shark Advocates International. To get better photos, they often haul them out of the water, an illegal act when it involves endangered species, which are protected by law from harassment.

“Through social media we’re seeing more mishandling of sawfish,” Fordham said. “Sawfish with tail ropes that had clearly been dragged.Sawfish should never be lifted out of the water or dragged.” Unfortunately, she said, funding for public outreach on sawfish has been reduced, making it harder to spread the word on how to avoid harming them.

Poulakis said he still encounters sawfish with fishing line around their heads, often tight and biting into their flesh because the sawfish has grown. He said recreational anglers generally try to free the fish but understandably don’t want to get too close to a thrashing saw. “Most of them try to untangle them as best they can,” Poulakis said. “We see pretty significant damage to the head area. It gets wrapped around. It really starts to dig in. We’ve seen cases where as the fish grows, it will get tighter. We cut that off.”