CHILABOTHRUS EXSUL is a non-venomous species of boa, the only one of its species and genus. These snakes are grey with a reddish sheen. They grow to a maximum of 80 cm / 2ft 6″ in length [now see end of post] and feed on small mammals, birds and lizards. They are found throughout the Abacos, including Elbow Cay; and on Grand Bahama; but not elsewhere in the Bahamas (wiki-aided inc. image) 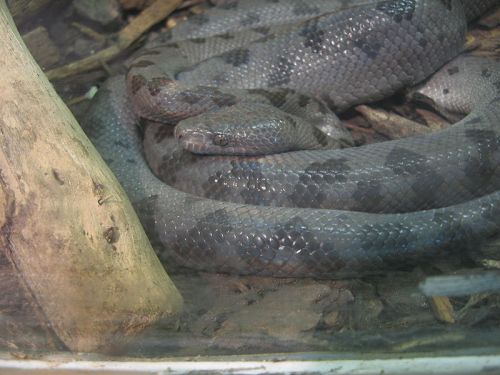 And if you can’t get to Abaco, there’s one in Oklahoma City Zoo: OKCZ ABACO ISLAND BOA

LATEST NEWS DEC 2011 a surprising visitor to the Friends of the Environment offices on 7 Dec 2011, posted on their Facebook page

STOP PRESS: a convincing refutation of the general consensus that the maximum length of these snakes is around 2′ 6″, with thanks to Brigitte Bowyer Carey. This specimen was photographed on Tilloo Cay in 2008, held at arms length by Don Allen