THE CUBAN AMAZON PARROT: A WORK OF ART & NATURE

I have just posted a gallery of bird art by Artmagenta, showing varous species from his global ‘Bird of the Day’ series that can be found on Abaco. He asked for further suggestions, so naturally I suggested the avian symbol of the Abacos. A few days later, it has flown in, in all its glory, with his description below it. So I’ll step back and let the bird do the talking. 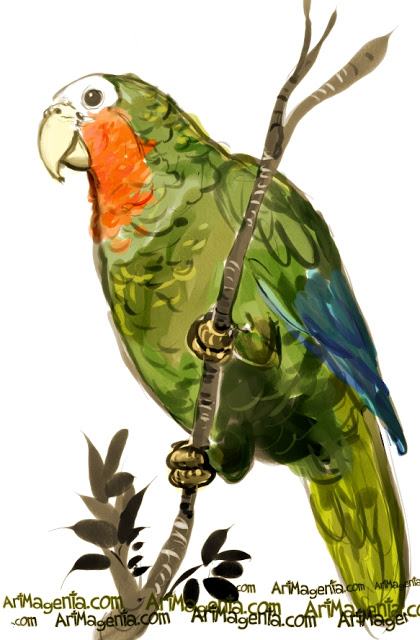 “The Cuban Amazon (Amazona leucocephala) also known as Cuban Parrot or the Rose-throated Parrot, is a medium-sized mainly green parrot found in woodlands and dry forests of Cuba, the Bahamas and Cayman Islands in the Caribbean. The Cuban Amazon lives in different habitats on different islands. It was once found throughout Cuba, but it is now mainly confined to the forested areas of the main island and Isla de la Juventud. On the Cayman Islands the parrot lives in dry forest and on agricultural land. Cuban Amazons nest in tree cavities throughout most of its range, the only exception being that the parrots living on the Abaco Islands nest underground in limestone solution holes, where they are protected from pineyard wildfires.”

2 thoughts on “THE CUBAN AMAZON PARROT: A WORK OF ART & NATURE”