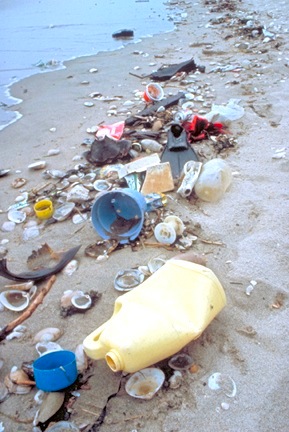 Plastic marine debris washed up on a beach (NOAA)

Rolling Harbour is a broadly neutral territory. We occasionally do ‘opinionated’ round here. We are not afraid to express views. But we try to avoid controversy and in particular, politics in its broadest sense. There have been occasional lapses into outrage – one example was the huge cruise ship taking a shortcut (allegedly, I had better add) that trashed significant areas of irreplaceable coral reef and smeared poisonous anti-fouling paint along the seabed, affecting reef life for decades and… Stop me right there!

The most sensitive area is conservation. Some issues are straightforward; with others the balance of what is right and wrong is more debatable. One particular aspect that can be problematic is in the presentation of information. We are all familiar with charity appeals that cajole with images of happy children or sweet puppies. We also see the ones with horrific images that are uncomfortable or even downright unpleasant to look at. Both can be powerful and valid  ways to raise awareness and attract support. Some of the more extreme images used may actually have the effect of repelling people. The same is true with conservation projects. There are ones illustrated with images that make you go ‘ahhhh’ and smile; others are undeniably distressing and will make you wince with uneasiness.

See how you react to this 45 second video from Australia. It is made by Greenpeace – itself a controversial organisation in some eyes – and concerns Coke, plastic and birds. I had no idea what to expect, and it gave me a jolt. It has been the subject of legal action, of alleged censorship and interference from powerful lobbies, and a sizzling amount of anger. It won’t take you long to watch it. Compare how you feel during the first ten seconds with how you feel 30 seconds later…