There are 32 warbler species that migrate south and join ABACO’S 5 PERMANENT RESIDENT WARBLERS for their winter break. Some, like the Prairie Warbler Setophaga discolor, are common; a few are quite rare; and one, the endangered Kirtland’s Warbler, is a ‘bird of a lifetime’ if you manage to see one. Or even hear one.

The Prairie Warbler prefers open areas to coppice and pine forest, though despite its name it does not inhabit prairies in the summer months. Scrubland and backcountry wood margins are a favourite haunt. This is a tail-bobbing warbler species, and is often seen low down in foliage or actually on the ground.

The wonderful photographs below were all taken on Abaco by Gerlinde Taurer, whose collection of bird species photographed on the island was used extensively in the “THE BIRDS OF ABACO“, including one of the Prairie Warblers below (awarded a full page). 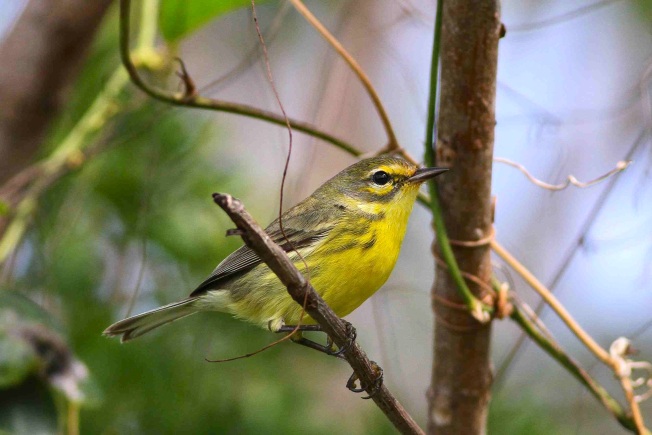 The overall impression is of a small yellow bird with darker wings and back, and conspicuous black streaking. However there are considerable variations in the colouring and patterning within the species depending on age, sex, season and so on. One indicator of the species is a dark line through the eye. Mostly, there will be a patch of yellow above and / or below the eye. However, all the birds on this page show differences from each other in their markings, and one can only generalise about their appearance.

Prairie Warblers forage for insects on tree branches or sometimes on the ground. You may also see them ‘hawking’ for insects. They have two types of songs, sung at different times – for example in the breeding season, or when territorial assertion is called for. Here is one example:

These warblers also use a simple chipping calls of the ‘tsip’ or ‘tsk’ kind.

Though currently IUCN listed as ‘Least Concern’, numbers of this species are declining. The two main threats to them are mankind (habitat loss); and nest parasitism by, in particular, the Brown-headed Cowbird, a bird which causes problems for many other species.