WHAT’S IN A NAME? COMMON GALLINULE aka MOORHEN

Names can be a hassle. My own, when not my alter ego Rolling Harbour (from a long line of Harbours), was a act of Baptismal Folly for which I cannot be held responsible. I could have changed it by Deed Poll were I seriously bothered, but I am aware that there are far worse names out there and at least mine reflects my scandi-scottish origins I suppose.

The Moorhen has had a far worse time of it. Over many decades its name has been changed, changed back and changed again. Partly it’s to do with a continuing debate over the New World and Old World subspecies – or as it now stands, separate species. Even that status has changed around over time. It’s enough to give the poor creature an ID crisis.

The Common Gallinule Gallinula galeata, as it has been known since 2011, is a bird of the rail family. The AOU decreed its divorce from the Common Moorhen after due consideration of the evidence and it is now lumbered with the less familiar and user-friendly Gallinule name. 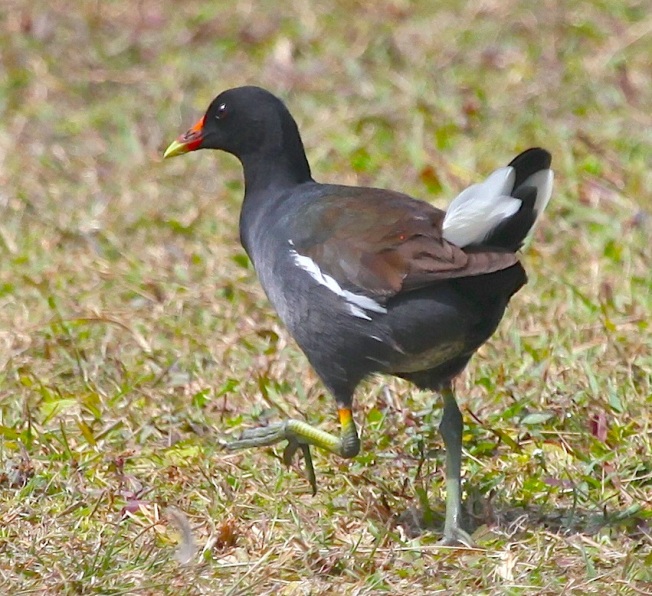 Moorhens (I’m using this as a comfortable nickname, aware that I am flying in the face of progress) are usually seen swimming serenely around ponds or picking their way through marshy ground as they forage. They have an aggressive side, hissing loudly if they feel threatened and fighting to preserve their territory or nest. Nestlings have been observed clinging to a parent as it flies to safety with its offspring as passengers. 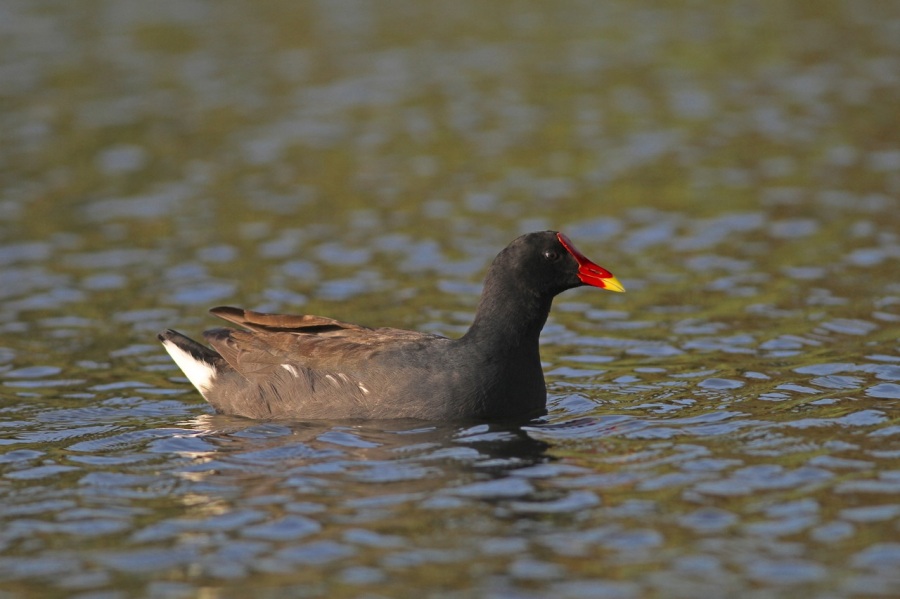 WHAT IS A ‘GALLINULE’ WHEN IT’S AT HOME

I wondered what the word ‘Gallinule’ actually means? What is the derivation? The BINOMIAL NOMENCLATURE (basically = scientific name in Latin) of most species is largely unintelligible unless you have some knowledge of Latin. But most birds end up with a useful, often descriptive, everyday name. Red-tailed Hawk. Least Tern. Yellow Warbler. Painted Bunting. You know what to expect with those. But a ‘Gallinule’ could as easily be a french cooking receptacle or delicious dish. Or a grim and slimy horror from Tolkien. Or maybe something / someone out of Harry Potter. Sleuthing online reveals that the word is a modern Latin construct of the c18, derived from the Latin diminutive word for a ‘hen’. So it’s simply a hen. As in Moorhen.

WHAT IS A ‘MOOR’ WHEN IT’S ATTACHED TO A HEN?

This does not refer to a wide swathe of open upland country, often covered in heather and gorse, where in the UK (especially in Scotland) every August 12 thousands of grouse are traditionally shot. It stems from an honest Old English word for a marshy or swampy area, Mor. It was used from early mediaeval times and itself comes from Saxon and Germanic roots. So perhaps calling the Common Gallinule a [Common] Marsh Hen would be more helpful… Or – hey! – why not have American Moorhen and Eurasian Moorhen, a perfectly valid differentiation used quite satisfactorily for other species…?

There’s more on the naming of birds generally and Moorhens specifically in a couple of amusingly-written sources I came across. The first is from NEMESIS BIRD written by Alex Lamoreaux in 2011, called Goodbye Moorhen, Hello Gallinule. The second is from the excellent 10000BIRDS.COM entitled Moorhen Mania – the splitting and renaming of the Common Moorhen

The bird above with a striking colouring and orange beak was photographed by the late Tony Hepburn. He believed it to be an unusual LEUCISTIC moorhen with reduced pigmentation, a condition that has similarities with ALBINISM. 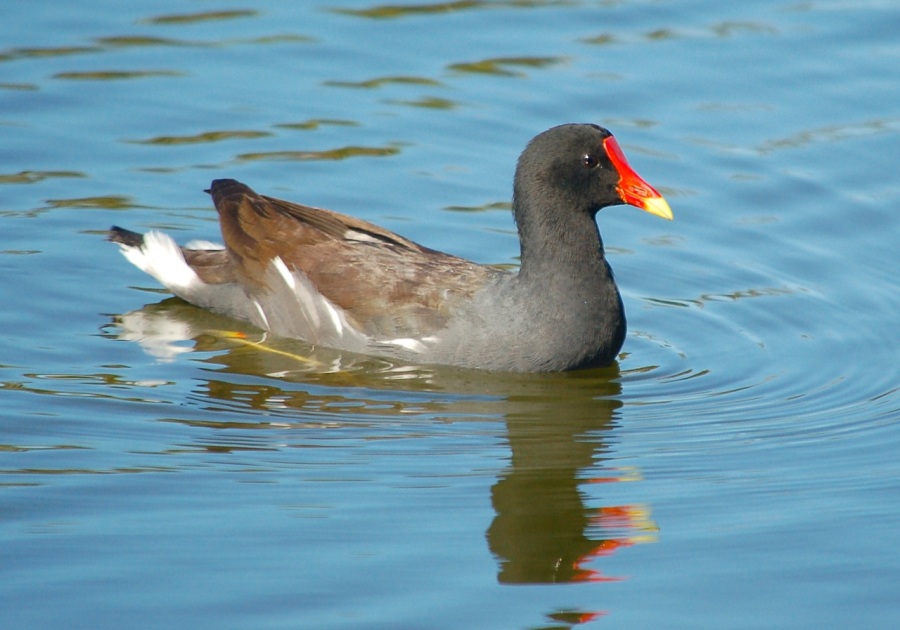 At some stage I am planning a companion Coot post. I won’t need to go on and on about that name. It may not be descriptive but it is short and simple, and everyone knows where they stand with it. Until they decide to rename it a Cotellinule…

9 thoughts on “WHAT’S IN A NAME? COMMON GALLINULE aka MOORHEN”