Wilson’s snipe Gallinago delicata is a plump little bird that is classified as a shorebird. But unlike some, it is not confined to the shore and immediate hinterland – marshland or brackish pond regions are also favoured habitats. Until recently (2003) the Wilson’s was treated as a subspecies of the widespread Common Snipe, before being accorded its own species-status. Something to do with white on the wing edges and a couple more tail feathers. If you want to know who Mr Wilson was (who also ‘owns’ other birds such as a plover and a phalarope) you can find out HERE.

A Wilson’s Snipe on Abaco (but not on the shore…) 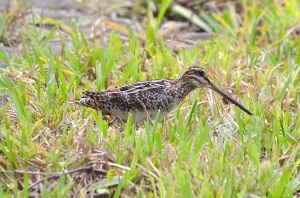 The snipe, in common with several species such as the woodcock, willet and dowitcher, has a notably long bill. The header image is one of the best I have come across that clearly illustrate it, and comes from the extensive archive of the excellent BIRDS CARIBBEAN. The naturalist concerned noted “…check out this remarkable bill. If you have not held a shorebird like this in your hand, the bill is pliable, flexible, and innervated. The snipe feels its way through the muck and then plucks the worm out like tweezers”.

The snipe has the misfortune to be a game bird. In the c19, its populations began to reduce due to habitat destruction – especially the draining of marshland – to which it is still vulnerable, of course. But more serious was its increasing popularity with hunters as a difficult bird to shoot, with its fast, jagging flight. A hunter skilled enough to shoot snipe successfully became known as a “sniper”, a usage coined some 200 years ago. I imagine the verb ‘to snipe (at)’  a person derives from this usage, meaning to fire off a quick, accurate, possibly hurtful remark.

Despite these drawbacks, there are enough snipe for the species to remain IUCN-listed ‘least concern’. In the Bahamas, they can be hunted between autumn and spring. This is the relevant page from the BNT HUNTERS’ GUIDE 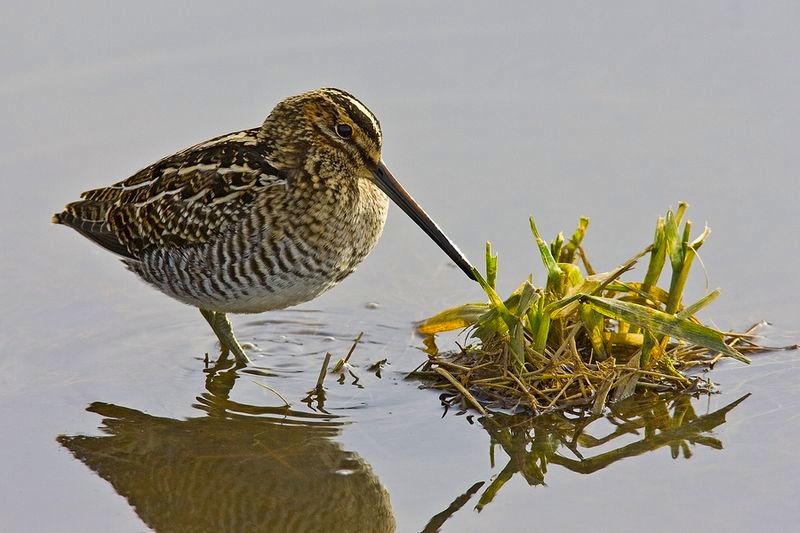 WILL I SEE WISNs ON ABACO?

Although the Wilson’s snipe is one of the most widespread shorebirds in North America, they are far less readily found on Abaco. For a start, they are migratory in the Bahamas, and only resident in winter (broadly, October to March), their non-breeding season. So don’t expect to find them during your pleasant stay in June.  Secondly, they are classed as ‘rare’, one grade harder to find than ‘uncommon’. Thirdly, they are shy and well-camouflaged. Unless they choose to be out in the open – foraging in water, or maybe standing on a post – they can be very hard to see. And in winter it seems they tend to hunker down more and fly less than in the breeding season. Maybe they show more in summer because they know it’s the closed season for hunting… Compare the next two images, one taken on Abaco in winter, and one (cheers, Wiki) elsewhere in the summer.

A winter snipe on Abaco – shy, retiring and blending in with its surroundings 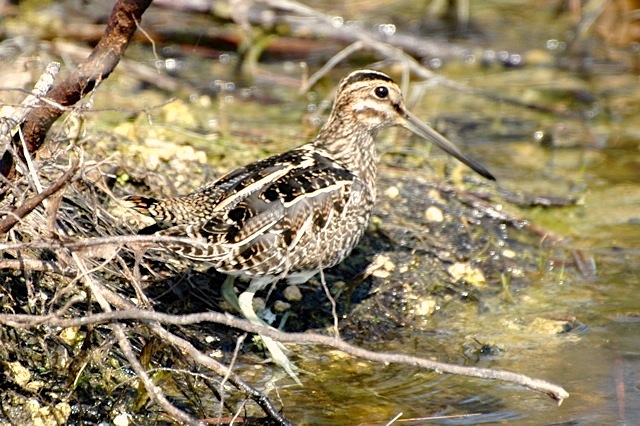 Wilson’s snipe in summer, confidently on a post in summer (closed season for hunters…)

DO SNIPES HAVE A DISTINCTIVE CALL THAT I WILL INSTANTLY RECOGNISE?

Not really, I’m afraid. Not easy for an amateur (me). They have a variety of vocalisations – calls, flight calls, and songs. They also make a sound called ‘winnowing’ with their tails while in flight. Here are a few short examples.

Now that the wonderful Crossley Guide ID bird images are available ‘open source’, I shall be including them in future species posts. When I remember. Their advantage is that in one image you can see all aspects of a paricular species – gender, breeding plumage, typical ‘poses’, in flight and so forth. A truly great resource for bird identification. 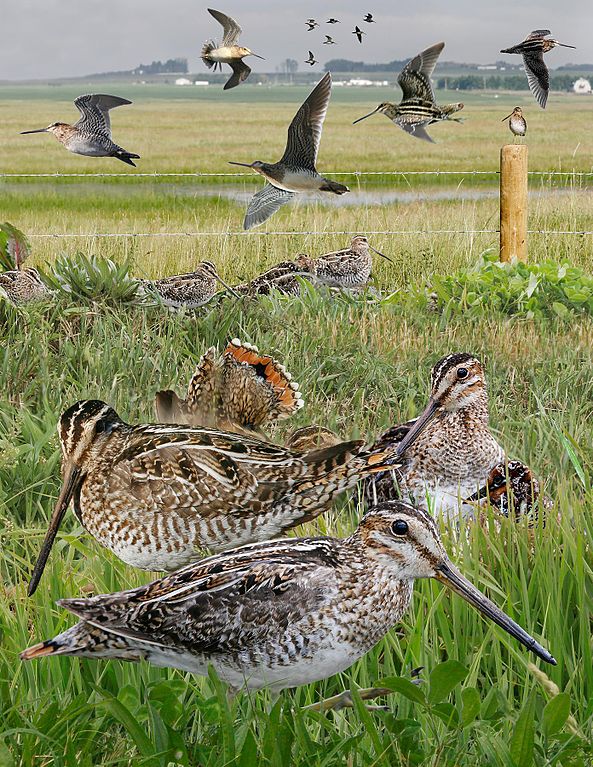