It was a bright sunny morning and the sand on the beach was warm under Harry Potter’s bare feet. Although by now a very experienced flyer, his recent adventures during his epic 1000-mile journey had left him very tired. All his friends that had undertaken the same long flight were tired too. Now they were enjoying a quiet, peaceful time away from all the dangers they had somehow survived during their scary expedition (see Harry Potter and the Migration of Fear). It would be a long time, Harry said to himself – maybe as long as 6 months – before he wanted to have another experience like that. He wondered when Ron Piper and Hermione Plover would arrive. He hadn’t even found them yet…

But the little group on a remote shoreline on Abaco were not as safe as they thought. Unknown to the happy, sleepy plovers on the beach, they were already being stalked by two creatures. This determined pair had one sole aim – to find plovers, to catch them and to carry out scientific experiments on them. That’s three aims, in fact. The editor would surely fix that error later (No – ed.). Would Harry and his friends soon find themselves in mortal peril from these formidable adversaries, these beasts with huge brains, armed with the latest technology? What magical powers would be needed to combat the imminent danger creeping stealthily towards them? The male definitely had a spine-chilling look about him; the female appeared less daunting – but might therefore be all the more dangerous…

Suddenly, Harry felt a sense of danger. Fear ruffled his neck feathers and his little left foot started drumming impatiently on the sand. He’d felt like this several times before, like that time the Dark Lord had driven a SUV straight at him on that nesting beach many miles away, the one where he cracked out (see Harry Potter and the Vehicle of Dread). And when the massive dog came and sniffed round the nest when he was a tiny chick (see Harry Potter and the Hound of Horror). Instinctively, he grabbed a magic meat-string from the damp sand, ate it, and took to the air… only to be caught up in some sort of fearsome spider’s web (a mist net – ed.). He was trapped. He struggled bravely, peeping out his anger at this cruel trick. But it was no good – he was caught fast, and wriggling only seemed to make it even worse. The massive creatures were running towards him fast, shouting in triumph – they had got Harry exactly where they wanted him – at their mercy…

A Mist Net (if unsuccessful, A Missed Net)

Just as Harry had started to believe that his last moment had arrived, an amazing thing happened. Instead of dispatching him with a swift blow to head, as the Dark Lord might have done, he was gently removed from the net and softly held in the female’s hands. His instant fear that she might crush him to a horrible mangled pulp rapidly lessened. Why, she was even talking to him. And those voices. They sounded not so much fearsome as friendly. But were they lulling him into  false sense of security, only to wreak an evil vengeance upon him? (*Spoiler Alert* No – ed.).

The Steph of Egger with captive Harry Potter, & wearing the cap of the mysterious ‘Delphi Club’

Then suddenly things got worse. Much worse. Harry was slowly wrapped in a large white blanket and laid on something that wasn’t sand. Something hard. What were they planning to do with him now. He heard the male – Harry had now concluded that he must be dealing with the Avian Overlord himself, the infamous Todd of Pover, first cousin of Severus Snipe – mutter an incantation: “54 grams. Pretty good. 54 grams. Have you got that”. Yes, they’d taken his dignity and his weight but there had been no pain. Yet. Harry began to relax a little.

Meanwhile, Steph the Egger was making a strange rattling sound. As Harry was unwound from his shroud he suddenly saw a box filled to the brim with exotic jewels of the most opulent colours glistening in the sunlight. At once, he knew he had to have one of them. A beautiful pink one. One to wear on his leg. One that he could keep for ever. One that would always mean ‘Harry Potter’. That very one on the top. Just there. With the magic number 22 on it in black writing. And Harry started to breathe a special silent Piping Spell: ‘Please pick me up… in your hand… and fit the Magic Two-Two Band…’

And, miraculously, the spell began to work. First, Harry was gently held as the Magic Band was put round his right leg. At the top, just where he wanted it. Harry shut one eye and repeated the spell. 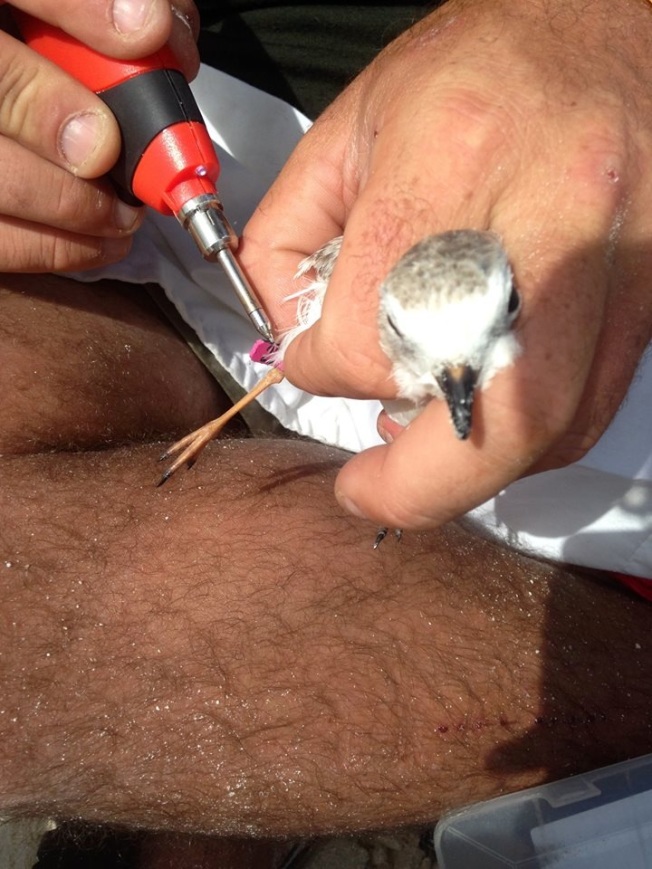 Then despite an awful wound from an earlier battle, the Todd of Pover made sure the band was secure and would never come off. It would be there forever – the Harry Potter ID band. By this time Harry didn’t even mind the indignity of being turned upside down. 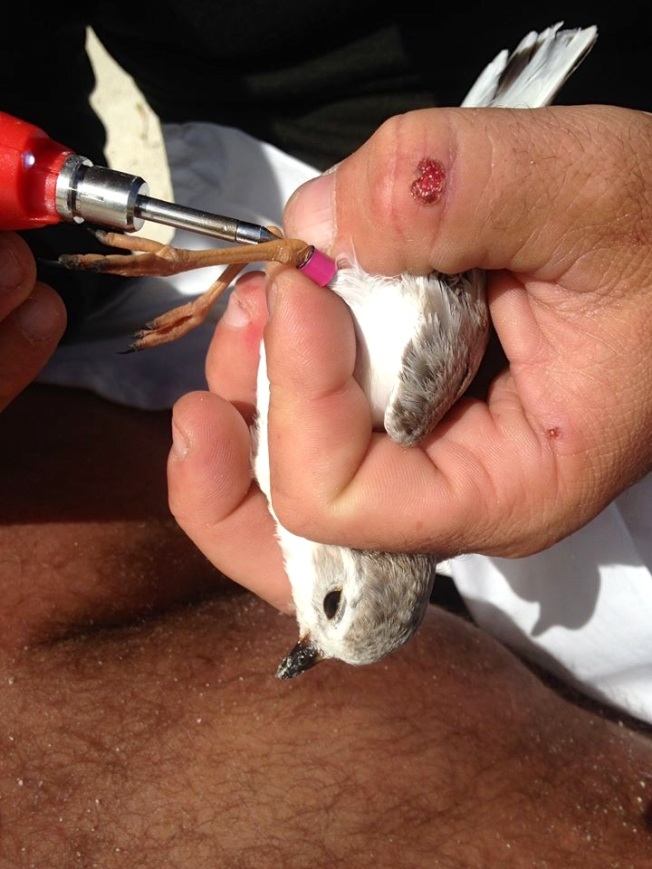 Finally, it was done. Really, the jewel was more like a flag than a band. But Harry knew instinctively that it would take a massive effort for his story to be rewritten to make this clear from the start, so he decided to let it pass. Band. Flag. What did it matter. It was his prize, gloriously his.

And then he was passed to Steph the Egger. Harry presumed she got her name for her ability to find nesting birds in that other place he had flown South from. And now, here she was, holding him tenderly, talking to him and telling him how cool he looked. Even her bright red claws did not seem so frightening now. Except… WHAT WOULD HAPPEN TO HIM NOW?

Suddenly, Steph the Egger stood up and Harry found himself several feet above the safe warm sand. Steph held him out in front of her and then, in an instant, he was free… Free to fly away with his beautiful pink jewel band, his special number, and an intuition that wherever he might be, and whoever saw him, they would always know that he was Harry Potter for as long as he lived. Against all odds he had gained… THE MAGIC BAND.

No one knows when Harry Potter left Abaco last spring, nor where he spent his Summer. All that can be said with certainty is that 12 months later he was found again on the same beach, Long Beach Abaco, in the same place. 5 other PIPL were pink-banded with him last year by the National Audubon, Virginia Tech, BNT, and CWFNJ team (pink being the colour used for Bahamas birds). Of those 6, 5 have been resighted on the same beach in the last few days. They migrated north last Spring, spent the Summer probably in different locations yet found their way back to the same place on Abaco to overwinter together again.

GENDER NOTE In fact it isn’t clear if HP is male or female (see below). He might be Harriet Potter. But I have played safe and stuck with the gender implied by his given name… 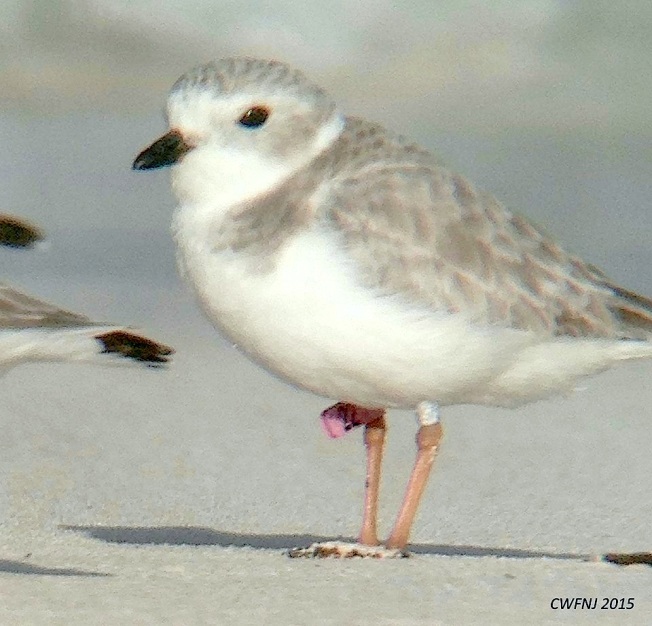 “I helped band this piping plover last winter, and called him “Harry Potter.” I know 22 isn’t Harry’s quidditch number (07), but 22 is for my birthday when I mostly seem to be down in Abaco. We don’t know where Harry Potter bred this year as no reports came in for him (or her). Maybe next season!

DISCLAIMER RE HEADER IMAGE I don’t suggest making silly photos of all “named” birds as this is an endangered species that we should certainly take very seriously. That said, I do think that names help people connect to the species and it also aids the researchers in id’ing (my personal opinion)”.