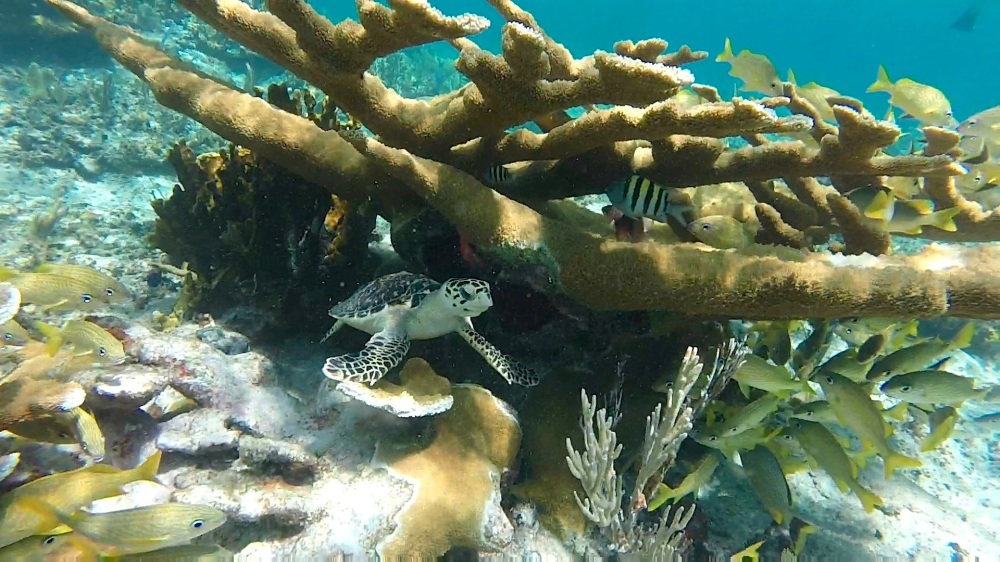 There is something unusual about this juvenile hawksbill turtle peacefully noodling round some impressive elkhorn coral with the grunts and sergeant majors. He’s a rarity. He was found at West End, Grand Bahama (just 67 miles swim from West Palm Beach Fl.), a place where hawksbills are very scarce. Loggerheads, they have. And there are plenty of hawksbills elsewhere in Grand Bahama waters. But not at the western tip. So finding this little guy and getting some good photos was a particular pleasure for Linda Cooper. And maybe the presence of a juvenile is a sign that hawksbills may begin to populate the reefs of West End, as perhaps they did historically. 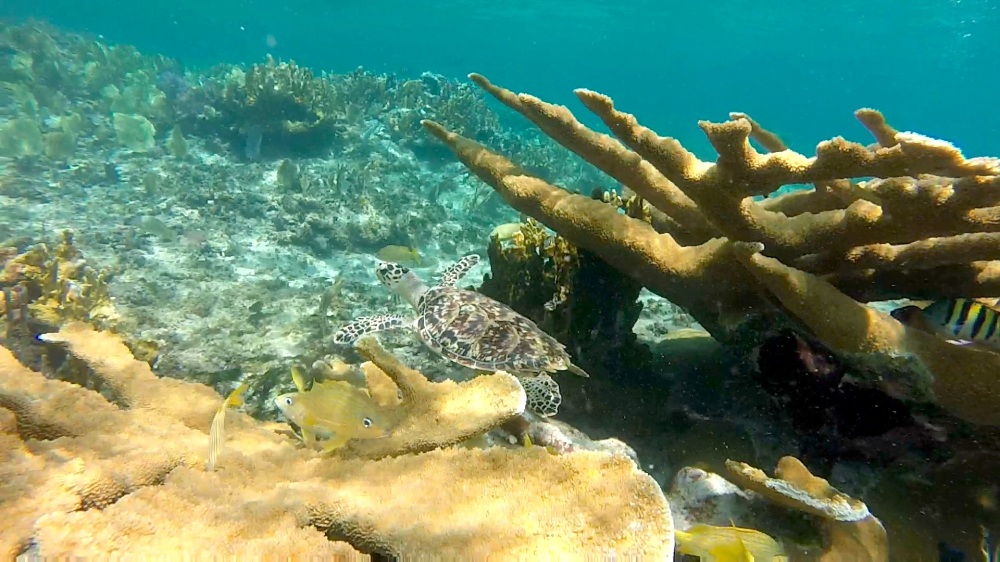 Linda and her husband Keith run West End Ecology Tours. They have a comprehensive website HERE and a Facebook page HERE. Check it out to see how much there is to explore at West End. The birds, the corals and reef life, the starfish – and a speciality, swimming with rays. To which can now be added the chance of seeing a hawksbill turtle… 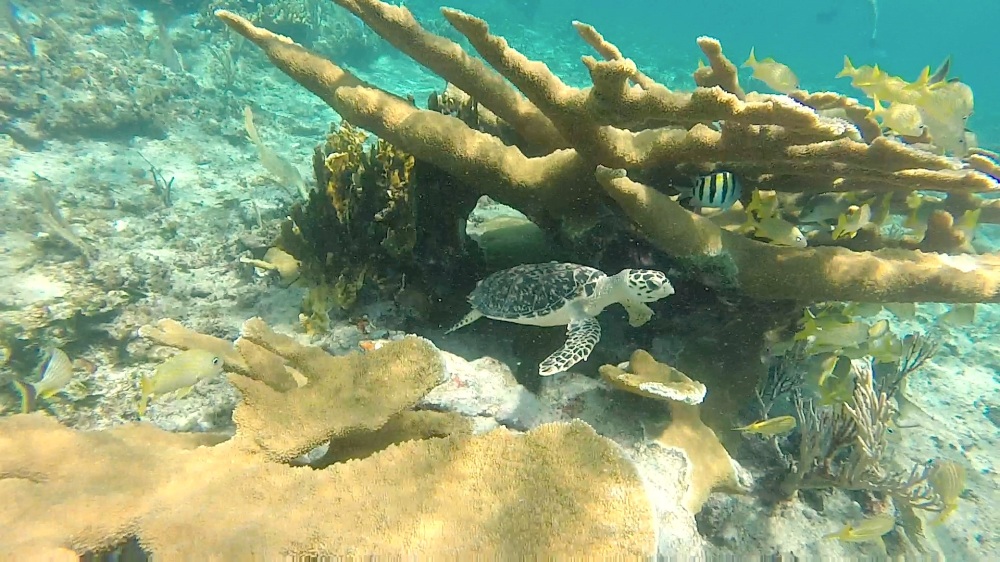 A DOZEN HAWKSBILL FACTS TO CHEW OVER

As I was writing this, another fact about hawksbills popped into my head. I checked through my archive – mainly Melinda Riger’s wonderful shots from elsewhere on GB – and yes, it is true. There seems to be some sort of symbiotic relationship between the turtles and angelfish. They are often found feeding together. A bit of research confirms this general observation, without giving a clear cause for it. Maybe it is simply that they eat some of the same food; and that there is plenty of it on healthy reefs so there is no cause for aggression on either side. It’s fine for a hawksbill to share with an angel. 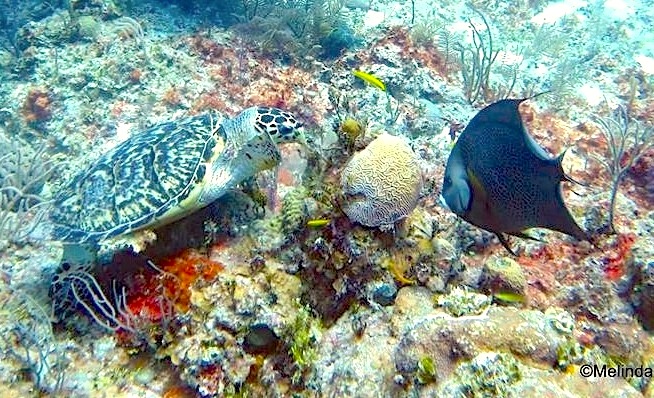 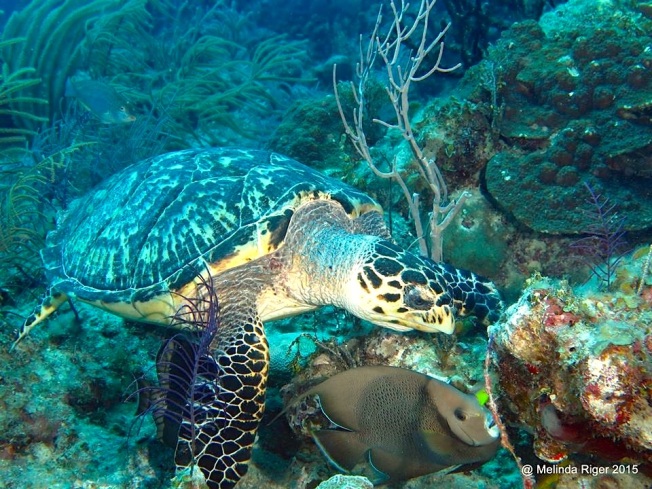 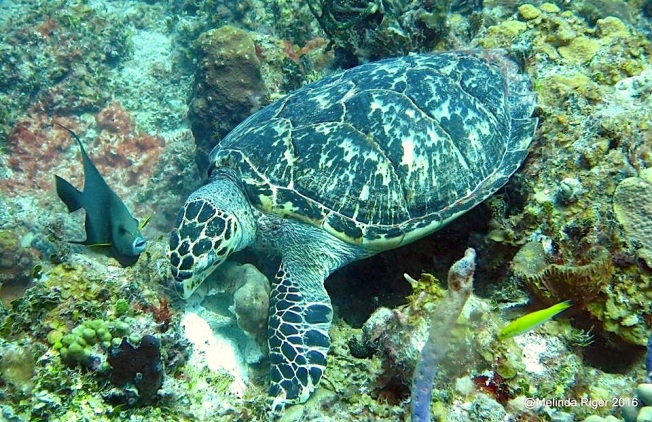 NOTE The Hawksbill is listed as Critically Endangered by the IUCN red list of Threatened species as its populations have declined dramatically throughout the world and especially in the Caribbean region. It is listed in Appendix I of the Convention on the InternatIonal Trade of Endangered SpecIes (CITES) meaning that Hawksbills are near extinction or very endangered. All marine turtles are now protected under Bahamian law, as is the taking of eggs.

Credits: West End Ecology Tours / Linda & Keith Cooper (photos 1, 2, 3); Melinda Riger / Grand Bahama Scuba, all other images; BAHAMAS NATIONAL TRUST  for their very useful fact-sheet (one of many) which I have adopted and adapted; Aquoflite for the vid.

7 thoughts on “HAWKSBILL TURTLES: A RARE FIND & SWIMMING WITH ANGELS”