GOATFISHES belong to the mullet family, a large group of species with a flexible membership. In other words, there is disagreement as to whether certain fish are mullet or not. For present purposes, it’s not our problem – no one doubts that the goatfish is a mullet.

SO WHY ARE THESE CALLED GOATFISH? WAS SOMEONE KIDDING?

These fish get their name for the pair of so-called ‘barbels’ below their mouths (see image below), thought to be reminiscent of a goatee beard. The name has Latin origin, ‘barbula‘, meaning a small beard. Linnaeus may have had a hand in this choice of description.

WHAT IS THE FUNCTION OF THE BARBELS?

The barbels are sensory organs which, depending on the creature, may be located on either side of the mouth, on the chin, or even extending from the nostrils. In broad terms, the barbels are where the taste buds are located. They help a fish to find food even when the water is stirred up or murky or at night, and are used to probe into sand or into holes in the reef for prey.

WHY ARE THEY OFTEN SEEN WITH YELLOWTAIL SNAPPERS, GRUNTS & PORKFISH?

Goatfish have limited means of self-protection. They are not poisonous or venomous, they have no spines or razor-sharp teeth, nor ink to squirt. They do have an ability to change colour rapidly to blend into their surroundings – e.g. over pale sand – to make them less conspicuous to predators. Overall, however, they are docile and probably delicious to many other species. Their bright hues may have some function as aposematic colouring to warn, scare or repel potential predators, but this is possibly of limited use among the familiar reef denizens. So instead the goatfish goes in for so-called protective mimicry, as shown in the image above. 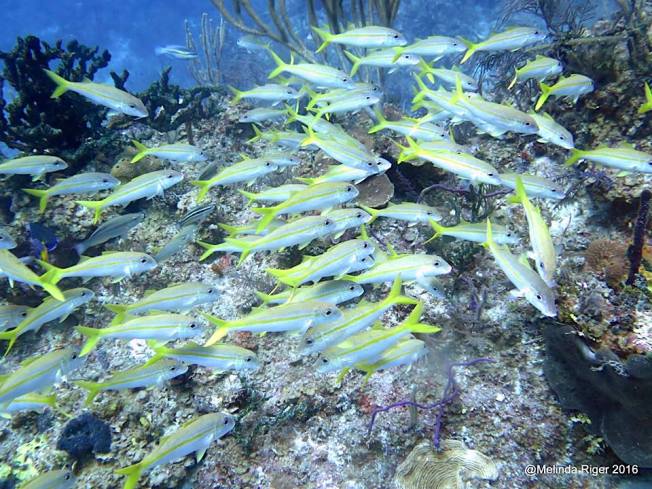 Goatfish and yellowtail snappers (in particular) are similar in size, appearance, coloration and behaviours, though the feeding patterns differ. The reason they are often found in mixed groups on the reef is for the individual protection they gain in a larger mixed school. This really amounts to taking advantage of safety in numbers (especially for the fishes in the middle). Here’s a very recent photo that shows exactly this scenario – a large mixed shoal of two almost indistinguishable fish species.

IS THIS A ‘SPOT THE DIFFERENCE’ TEST?

If you’d like to make it so! (click on the image to enlarge it). Look out for the fish with the barbels (Goatfish); and the fish with the larger, more deeply forked tails (Snappers). A predator won’t take a great deal of notice of the finer points of difference of course, but overall this large mixed shoal gives a degree of protection to individual fish in the unit as a whole

Goatfish are eaten in many ares of the world, though I can’t recall seeing it on a Bahamian menu. The Romans ate the local mullet / goatfish species, but then they ate many things that we do not now consider as permissible food – dormice in honey for example. Rather revoltingly, the goatfish were served live so that guests could watch them die and see the amazing change of colours in the process. Barbaric? But don’t we cook live… well, never mind that.

Photos: all great photos from Melinda Riger / Grand Bahama Scuba; magpie research pickings inc. the abstract of a scientific paper with about 23 authors; tip ‘o the hat to Wiki, no seriously