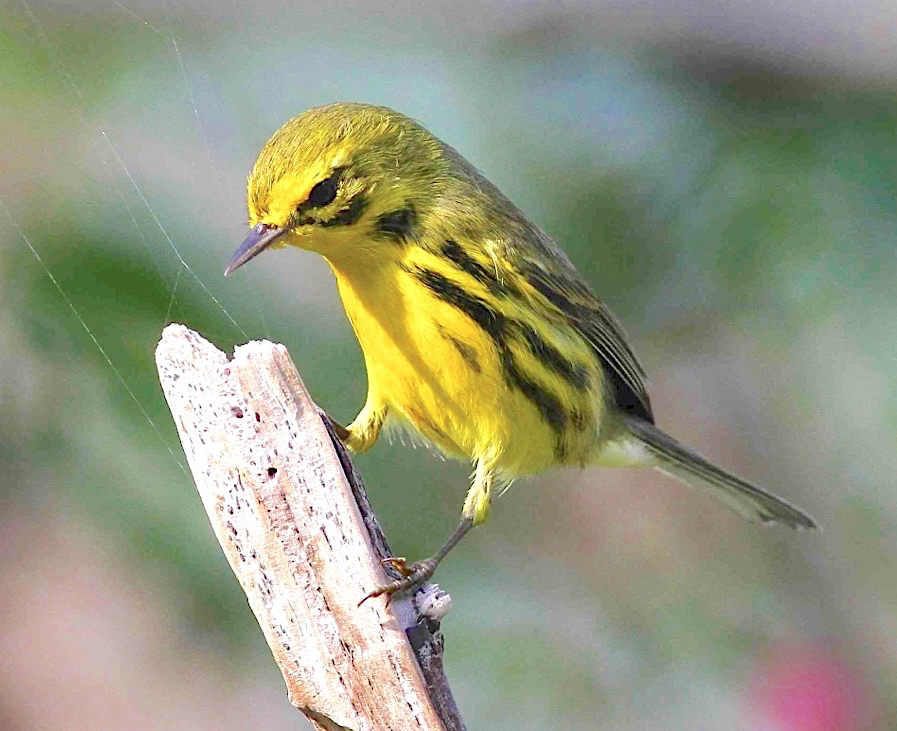 The increasing flow of reports of recent bird sightings on Abaco seems to confirm the theory that in times of crisis and of recovery from disaster, people gain strength from the natural world that surrounds them. The bright flash of a parrots wings; the hoarse squawk of a West Indian Woodpecker; the unmistakable cheery call of the thick-billed vireo; the ‘peep’ of a shore-bird – all these can bring comfort in troubled times.

Right now, social media on Abaco, and radiating far beyond, is alive with more encouraging news after the storm, not least about the gradual re-establishment of normality as utilities and services are restored, movement becomes more possible, and plans for repairing the past and designing the future can begin to be made.

This post features photos of Prairie warblers taken on Abaco by Gerlinde Taurer, contributor to THE BIRDS OF ABACO. It is the start of a short series that will focus on a single species and feature gorgeous photos, all taken on Abaco. These bright little warblers are common winter residents and in normal times their Fall arrival would be well under way – along with some 30 other species of warbler that make Abaco – and the Bahamas generally – their winter home.

The rich diversity of the avian life of Abaco is truly astonishing: from residents to migratory species, from tiny to huge, from frequently encountered to very rare. Every bird (yes, even the reputedly ‘dull’ black-faced grassquits) has its own beauty and character. Even a small brown bird may have a lovely song.  In non-storm circumstances, it would not be unusual for an amateur birder to encounter upwards of 40 species during half a day in the field – especially with binoculars. I hope that on a shattered island, appreciation of the lively and varied birdlife is already making a small yet positive contribution to the recovery.

Credits: All photos taken by Gerlinde Taurer on Abaco (my own are suppressed for being, frankly, dross in comparison) 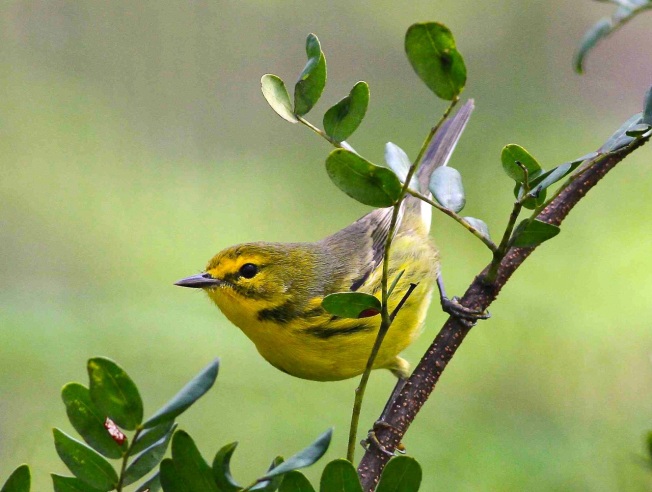 The NORTHERN PARULA Setophaga americana is a stumpy little migratory warbler with white arcs above and below the eyes, and with a slate-coloured back distinctively smudged with an olive patch in both sexes. These birds are winter residents on Abaco, and are common throughout the island and cays. They are arriving right now, including juveniles making their first trip to Abaco. Wonder what they’ll make of it?

Parulas are primarily insect eaters, with a preference for caterpillars and spiders. They sometimes dart from a perch to snatch insect prey in mid-air. In winter they vary their diet with berries and fruit. You are most likely to see one foraging busily in bushes and low trees – maybe coming up for air by poking its head above the foliage…

WHAT THE HECK IS  A “PARULA”? Originally, Linnaeus classified this little bird at a Tit, or Parus. For some reason, “as taxonomy developed the genus name was modified first to Parulus and then the current form” (Wiki Hat-tip). But although none of the other 37 Abaco warbler species is a Parus, Parulus or Parula, they all come under the family name Parulidae. The august institutions that deal with these things have classified the Parula as a ‘Setophaga’, along with many other warblers.

The CORNELL LAB list of adult Parula identifiers is shown below, with adult females being similar ‘but with greener backs’. These specifics are pretty much borne out by the birds shown here (except for the last bird, an immature female just beginning to develop the Parula characteristics). The next photo by Woody Bracey, is a perfect example of what to look out for.

Parulas produce different sounds to listen out for – a ‘chip’ call that could be any number of birds (IMO); a song; and a trill. Here are examples of each from the essential bird call site Xeno Canto. 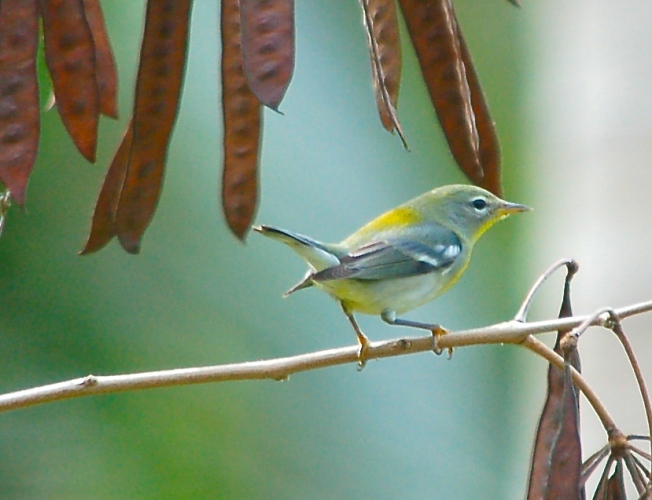 This is an immature female parula, a ‘first fall’ bird, and therefore on its first visit to Abaco 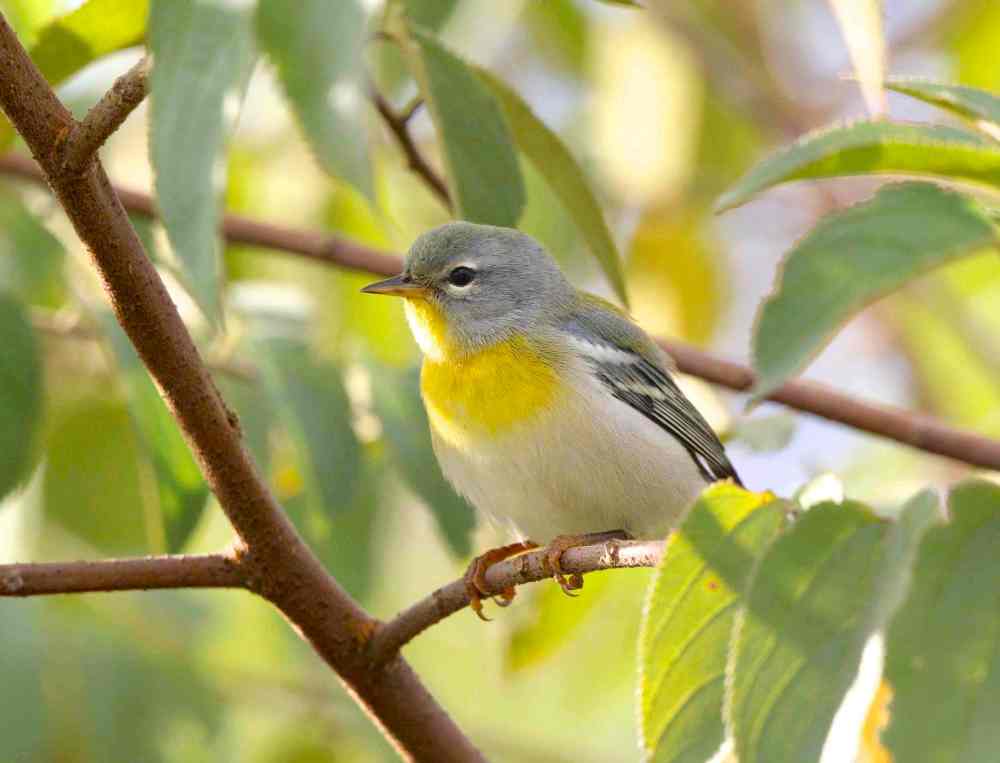 There are 37 Warbler species (Parulidae) recorded for Abaco. There is considerable scope for confusion between many of them. For a start, by no means all have the helpful word ‘warbler’ in their name. Secondly a great many of the species are to a greater or lesser extent yellow, with sub-variables for gender, age and season. It’s easy to get in muddle. A good place to start ID is with the warblers that are on Abaco all year round. Only 5 species are permanent residents on Abaco and the Cays: Bahama Warbler, Bahama Yellowthroat, Olive-capped Warbler, Pine warbler and Yellow Warbler. I have used images of these to illustrate this post.

The rest are mostly winter residents, with some being transient visitors passing through on their migration routes. Some are ‘everyday’ birds; some are unusual; and a few are extremely hard to find, the Kirtland’s warbler being the rarest and therefore the most prized sighting of all. I will be returning to the Kirtland’s in more detail in due course.

At the bottom of this post is a complete list of the Abaco warbler species, with Bahamas bird authority Tony White’s excellent codes indicating (a) when they may be seen; and (b) the likelihood of seeing a particular species (from 1 – 5). First however, news of a great resource for aiding warbler ID, produced by The Warbler Guide. Click on the blue link below to open a pdf with illustrative views of warbler species from several angles, spread of 8 pages. These are the warblers of North America, but you’ll find that almost all the Abaco warblers are featured. 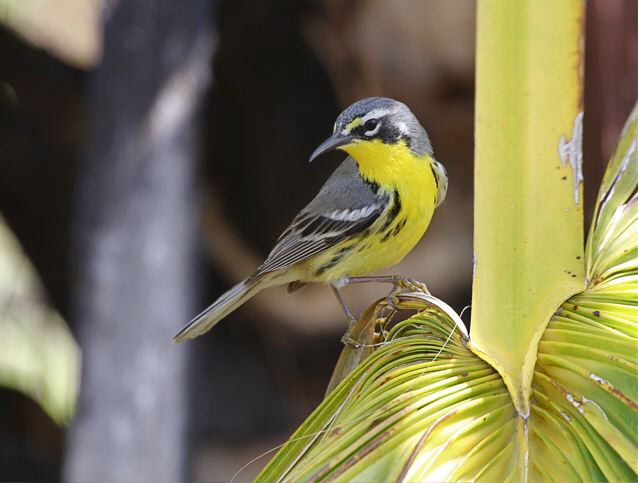 THE 37 WARBLER SPECIES RECORDED FOR ABACO

ABACO WARBLERS: IN SEARCH OF A YELLOW RUMP…

I haven’t been very lucky with yellow rumps in the past. This is not normally something one likes to talk about in a public forum… but to be honest I have been longing to get hold of a yellow rump of my own. The warbler Setophaga coronata, that is, a fairly common winter resident on Abaco. I’ve seen them of course. I’ve glimpsed a passing flash of yellow rump. But no YRW has stayed parked in tree with its backside towards me for long enough to permit me to photograph its posterior glory. Ideally I’d have liked a clear, attractive shot like the header image (Dan Pancamo, Wiki). But desperation leads to lowered expectations and plummeting standards. Frankly, this year I’d have been satisfied with any yellow rump. Abandoning my initial plan to apply a yellow highlighter pen to a compliant female grassquit, I bided my time. And suddenly there, at the very top of a tree near the swimming pool at Delphi, was my chance… A pair of YRWs were in evidence. 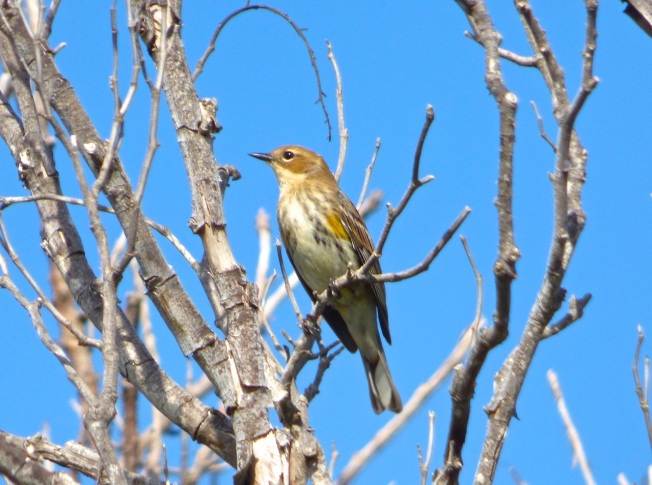 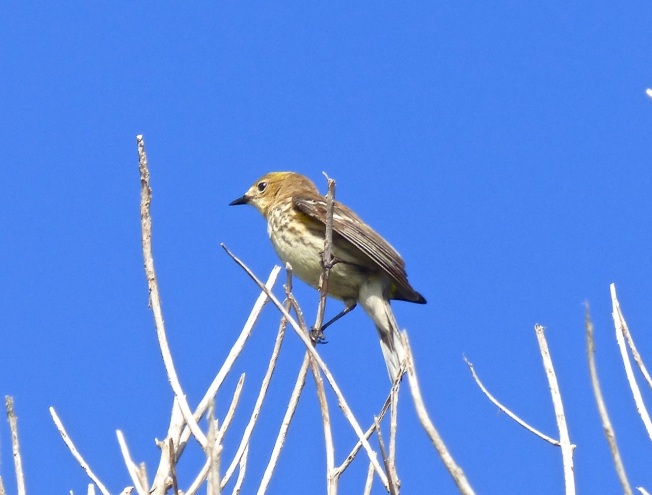 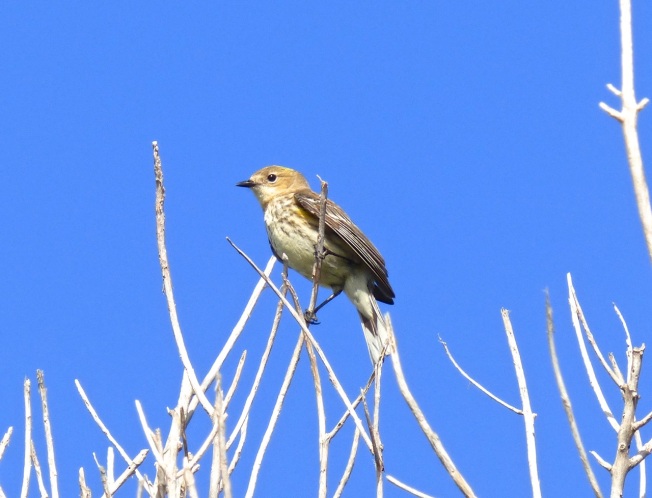 The tree wasn’t very close to me, and the birds stayed near the very top. My photos were never going to be great. Especially since each bird was meticulous in keeping its rear end out of sight. Then they flew away! However quite soon one was back. This time there were twigs in the way, one of the those little variables that makes camera focussing so enjoyable. But this time I managed to ‘pap’ its derrière…  Feeble shots but mine own. As an avian ‘Holy Grail’, a mere yellow rump leaves quite a lot to be desired, I can quite see. It’s on no one’s ‘bucket list’ of birding musts. But now I can move on, release that poor female grassquit and chuck out the highlighter pen.