FEWER THAN 300 LEFT IN THE WORLD – AND ALL ON ANDROS

Having just posted about the endangered NASSAU GROUPER and its protection by the introduction of a 3-month closed season, it’s time to focus on a rare, beautiful and vulnerable bird, the Bahama Oriole (Icterus northropi). It is IUCN Red Listed as ‘Critically Endangered’. ENDEMIC to the Bahamas, this bird lived only on Abaco and Andros. Not any more. Now you’ll only find them on Andros, the species having been lost to Abaco in very recent memory. The 1990s, in fact. And on Andros, this lovely bird is now struggling against the threat of extinction and is found only in limited areas in very small numbers. The most optimistic population estimate I have found puts the total as fewer than 300 individuals… the consensus puts the likely total in the region of 250. 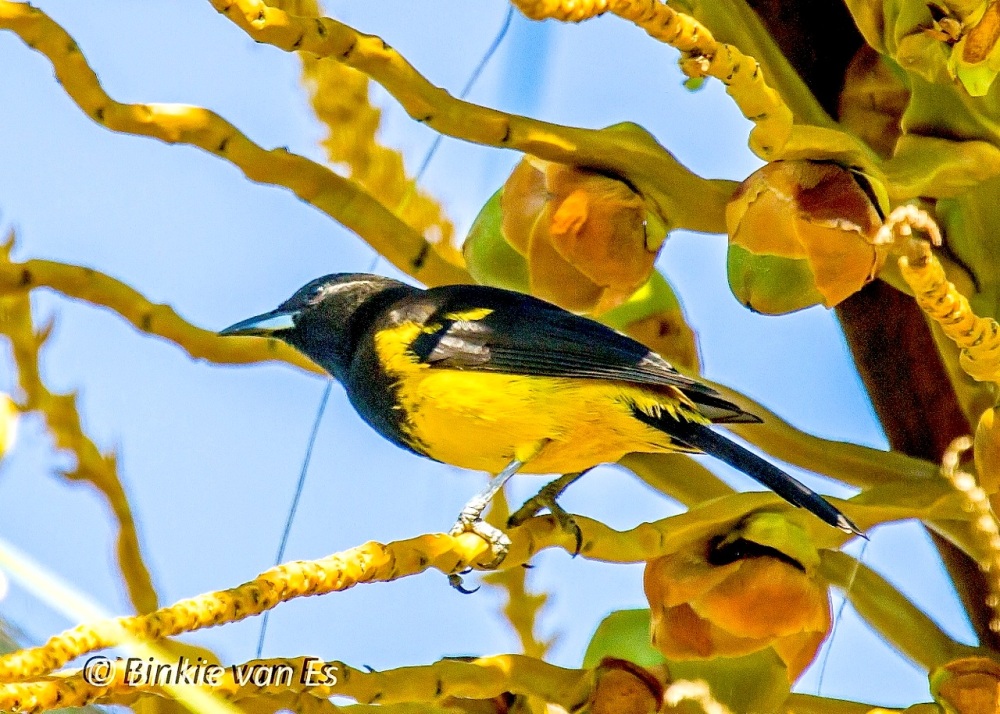 In 2010, the Greater Antillean Oriole Icterus dominicensis was separated by the AMERICAN ORNOTHOLOGISTS’ UNION into 4 species, one being the Bahama Oriole. As the BNT wryly put it, “New species are always a source of excitement… but in this case the intrigue is overshadowed by a sense of alarm and urgency”. For by then this new species ‘in its own right’ was limited to certain parts of Andros, in small and diminishing numbers. It had already vanished from some areas – especially in North Andros – were it had formerly been abundant. The best estimates suggested 250 individual birds. 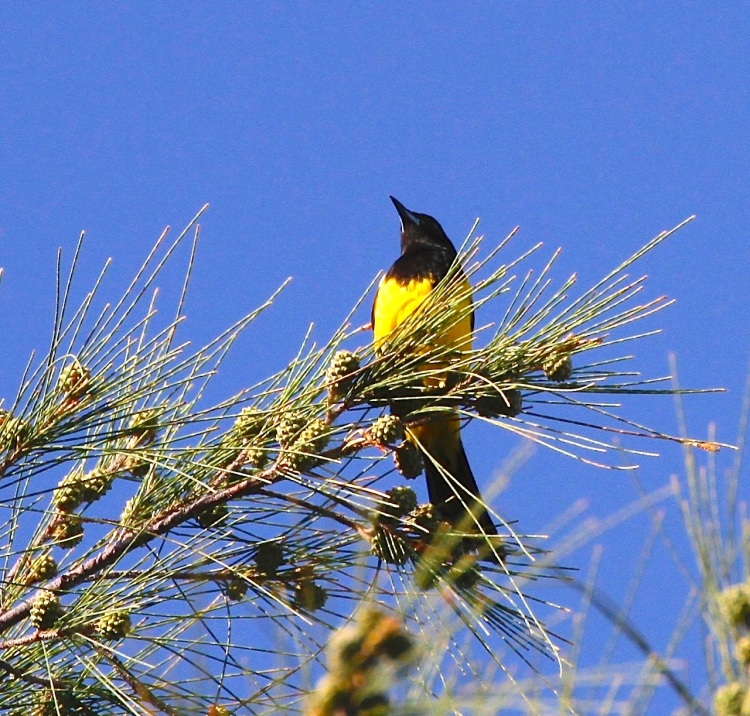 WHEN & WHY DID THEY VANISH FROM ABACO?

This is a classic ‘riddle wrapped in a mystery inside an enigma’. Various sources I have looked at use a formula such as “…became extirpated from Abaco in the 1990s”, or “disappeared for unknown reasons in the 1990s”. I’ve found no clear clue as to the cause – nor even when the last sighting of an oriole on Abaco was made. I haven’t found a photo of one taken on Abaco, although to be fair the option of snapping everything with wings several times using a digital camera with a large chip didn’t exist then. In the next para a number of crucial factors in the more recent decline of the Andros population are given; but as far as I can determine, some at least did not apply in the 1990s, or certainly not to the same extent. Maybe it was a combination of a degree of habitat loss and the gradual decline of a small population that could not breed prolifically enough to sustain the future population **. 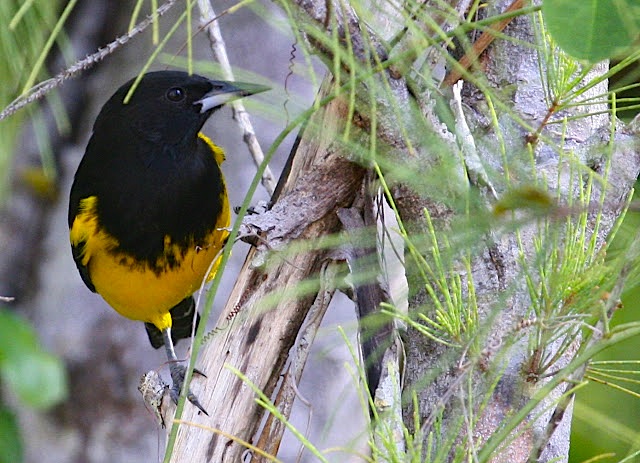 THE MAIN CAUSES OF THE CRITICAL DECLINE ON ANDROS

Lethal Yellowing Disease of the coconut palm, prime nesting habitat for the oriole. In some areas on Andros (e.g. Staniard Creek), the palm has been all but wiped out.

The arrival and spread of the Shiny Cowbird Molothrus bonariensis, a brood parasite that lays its eggs in the nests of other bird species such as the yellow warbler, the black-whiskered vireo… and the oriole. The cowbird reached Andros in the mid-1990s. The first Abaco report that I have found is from 1999 (so presumably, as the oriole was already gone from the island by then, they were not a factor).  The cowbird is a summer resident on Abaco, though still relatively uncommon; and its range continues to expand northwards. Some might argue that the cowbird should be discouraged from spreading on Abaco right now for the sake of the indigenous warbler and vireo populations – before it is too late.

Habitat loss / island development (although Birdlife International notes “…the planting of coconut palms in residential areas has allowed the species to spread into human settlements”). Other factors put forward include forestry work, forest fires, diseases, rodents and feral cats – problems that affect many other birds such as the Abaco parrot.

The photo below is a pleasure to include in this post. It was taken earlier this year on Andros by Christopher Johnson of Nassau. And here’s the thing. He is 13, and an avid birder. I’m sure he likes his X-Box time, but he certainly knows plenty about birds too. He’s quick off the mark with offering IDs – correct ones – for birds online, and when he saw this bird he knew the significance of it and managed to get some good shots too. This is my favourite, the oriole ‘vocalising’. See below for its song. Here is Christopher’s brief but enthusiastic field report: “Awesome trip to Andros this past weekend! Was amazed to see the Bahama Oriole and its nest — feeling great”.

Bahama Oriole taken during a BMMRO research trip on Andros 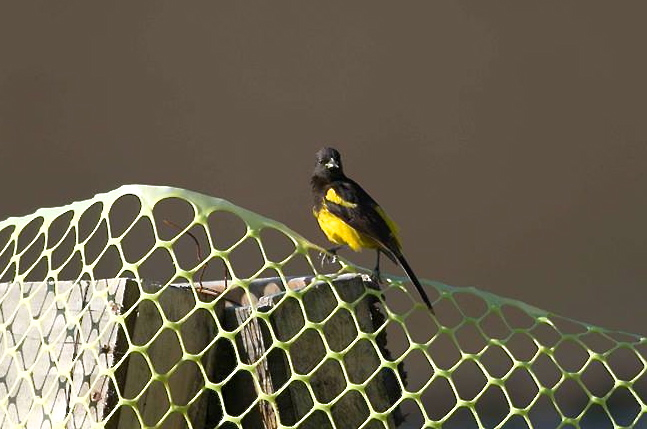 A GLIMMER OF HOPE?

In the same way that urgent conservation measures were put in place to halt and then reverse the critical decline of the Abaco parrot population, similar projects are in place for the Bahama Oriole on Andros. One proposal is to establish a ‘captive breeding’ program leading to reintroduction and reinforcement of the wild population. According to the American Bird Conservancy, this could even include reintroduction on Abaco… So perhaps in a decade or two, this fine bird will once again become firmly established as one of the birds of Abaco. 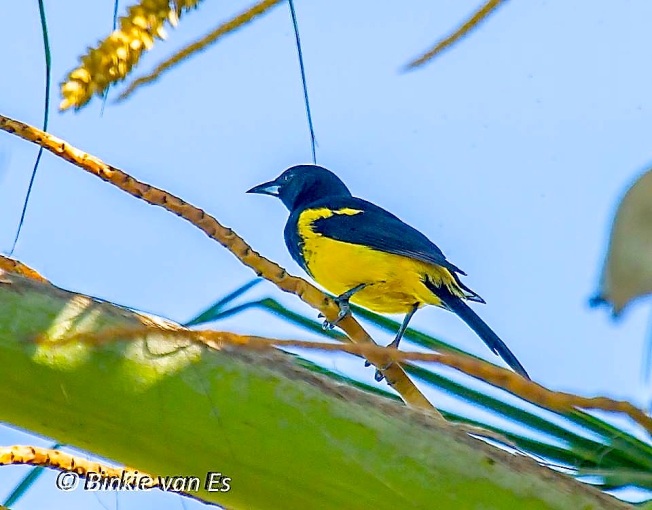 As I said in my Nassau Grouper post, a country’s attitude can to a degree be gauged by the pride with which it features its wildlife and natural resources in its stamps (I used North Korea for adverse comparison). In 2009 The Bahamas Postal Service even issued a ‘Rare Birds’ set featuring the Bahama Oriole.. I rest my case. 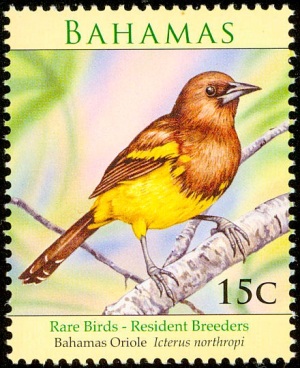 WHO WAS THE EPONYMOUS MR NORTHROP? 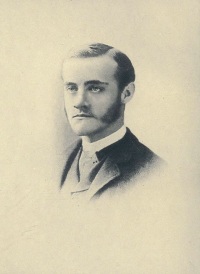 The comprehensive answer is provided by the University of Glasgow Library Research Annexe in relation to a fine  illustration from A Naturalist in the Bahamas (1910), reprinted in The Auk journal (below) at a time when Icterus northropi was still a mere subspecies: The yellow and black Bahama Oriole (Icterus Northropi) is a bird species unique to the Bahamas. The bird was named for American ornithologist and zoologist, John Isiah Northrop (1861–91); the illustration comes from an account of the trip Northrop and his botanist wife, Alice, took to the Bahamas in 1889 which was published in his memory: A Naturalist in the Bahamas: John I. Northrop, October 12 1861-June 25, 1891; a memorial volume (New York: Columbia University Press, 1910). It was edited and introduced by Henry Fairfield Osborn, professor of zoology at Columbia University where Northrop worked as a tutor and was killed in a laboratory explosion shortly (9 days) before the birth of his son John Howard Northrop (who became a Nobel prize-winning chemist). 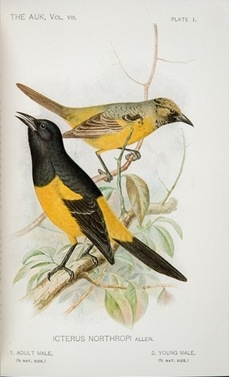 “Rediscovering the Bahama Oriole” Erik Gauger, author of the excellent Notes from the Road and photographic contributor to the Birds of Abaco has a good tale of the pursuit of the apparent sighting of a Bahama Oriole on Abaco 2o years after its (supposed?) extirpation. You can read it HERE The Auk Read more about this journal and the birding history of the Bahamas HERE There is a Care2Action ‘Save the Bahama Oriole Before It Is Too Late’ petition HERE. It seems to have stalled somewhat, so it would be good to generate some more signatories. ** Mathematically inclined? Find out about the application of the stochastic process to the oriole’s situation. In a nutshell, this concerns the combined effect of several random adverse factors on sustainability, given that the oriole’s already very small population, very limited range and particular habitat requirements militate against breeding expansion, and therefore increase the likelihood of extinction. We can only hope this is not an inevitability…