I’ve shied away from the whole ‘yellowlegs dimension question’ for long enough. Now that I have some brilliant photos for you, I feel I am obliged to address the issue. I was last forced into this slightly uncomfortable position while writing the captions for THE BIRD OF ABACO. We had GY photos. We had LY photos. We had none of the 2 species together, or at comparable distances from the camera. Frankly unless you are very knowledgeable and / or a regular birder where both species hang out, they are very hard to tell apart.

Both yellowlegs species are winter residents on Abaco, and neither is particularly common (though Gilpin Pond is always a good place to check for LYs). Both are very similar in almost all respects. The broad principle is that the GY is the larger, heavier bird, while the LY is more delicate and with a shorter bill in proportion to its head size.

In a more refined version, Cornell suggests: “GY’s bill appears slightly upturned and blunt-tipped, while LY’s bill is straight and sharp-pointed. LY’s bill is always dark, while GY’s bill is grayish at the base in non-breeding season. Voice is best distinguishing character: GY gives three or four piercing notes, LY two rapid, softer short whistles (sometimes three)”. But even this help depends on (a) light conditions (b) season and (c) whether the bird you are looking at is ‘vocalising’ or not…

TWO TYPES OF YELLOWLEGS ON ABACO – BUT WHICH IS WHICH?

If you saw the two birds above on separate days in different places at different distances, could you say with confidence which is which? Or maybe they are the same? Experts will probably know at once that the top bird is a GY in a ‘slimline’ stance; and the other is a LY in a ‘plump’ stance. But going simply on the ‘larger heavier bird’ and ‘bill-length principle’, I’d have said the opposite. And I’d be wrong. As usual. I suspect that the only way an amateur (e.g. me) can hope to be confident in distinguishing the two species is by seeing them frequently and preferably together.

Which takes us from Abaco, where the above birds were photographed by Tom Sheley, to Pinellas County, FL and the wonderful photos of Danny Sauvageau, an expert with the birds and also the camera. Here are some of his recent Greater Yellowlegs photographs that show the bird at its absolute best. They also demonstrate the ‘plump’ and the ‘slim’ looks of the same bird.

If anyone has any other reliable method for telling the species apart, please post a comment and I will gladly incorporate it as a STOP PRESS… 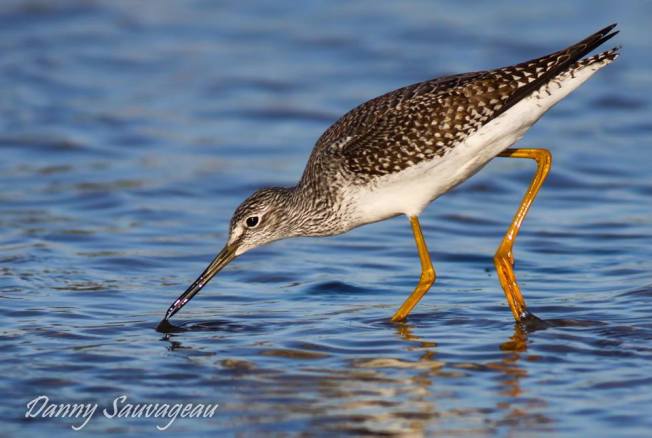 STOP PRESS 1 My thanks to blogging friend DEAR KITTY for reminding me of a video she posted that very conveniently shows a GY and a LY together, in circumstances where it is impossible not to notice that one bird is larger than the other. It’s an all-round helpful video, so thanks for this, DK.

STOP PRESS 2 Thanks again to DK for drawing my attention to a great photo by Matt Scott posted on twitter. Here are both types of yellowlegs together, in similar poses and the same distance from the camera – and the behold the difference. The very illustrative image I had been looking for, handed to me on a plate…

Credits: GY and LY on Abaco, Tom Sheley; all other photos Danny Sauvageau. Thanks to both for use permission. Also, Cornell Lab of Ornithology… And Matt Scott

9 thoughts on “GREATER YELLOWLEGS: LARGER THAN THE LESSER. PROBABLY.”