The Hooded Warbler (Setophaga citrina) breeds in eastern North America in summer, and winters in Central America and the West Indies. On Abaco they are classed as WR3, ‘uncommon winter residents’. The range map below reveals one strange aspect of their habitat. It looks as though they choose not to live in Florida either in summer or winter. I’m sure they must be found there as transients; and there must presumably be some small breeding or wintering populations in Florida. Or both. But it’s hard to understand why Florida does not seem to suit them. 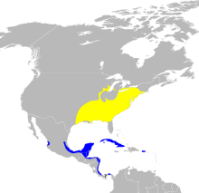 On Abaco, I have only ever had reports of Hooded Warblers from Man-o-War Cay, which seems to be a warbler hotspot every season. There are 37 WARBLER SPECIES recorded for Abaco. FIVE WARBLER SPECIES are year-round residents. Of the migratory 32, at least two dozen seem to favour Man-o-War for their winter break in the sun. MoW resident Charmaine Albury, who took the main photos in this post, has already counted 14 different warbler species before the end of September. She has found up to 5 species in a tree at the same time.

WHAT’S IN A NAME?

There are periodic upheavals in Birdland which, following research, lead to an official reclassification of a particular bird species or genus. In 2011, many warblers that were cheerfully going about their business under the classification Dendroica found themselves merged into the older ‘priority’ genus Setophaga (Greek for ‘moth eating’). The Hooded Warbler, formerly Wilsonia, has found itself similarly merged into Setophaga – a kick in the teeth for the naturalist ALEXANDER WILSON, for whom the bird was named (along with many others – his plover being a well-known example on Abaco).

The word relates to lemons – citrus fruits – and their colour, and is undoubtedly apt for the hooded warbler. However the semi-precious calcite gem, ‘Citrine’ (same word origin) is not lemon coloured but (disappointingly) brownish. 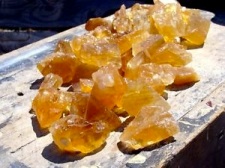 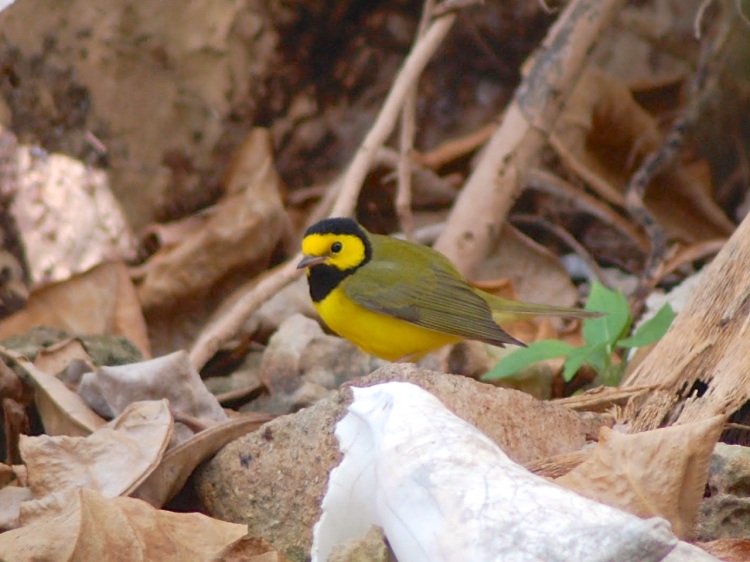 This little warbler has a plain olive / greeny-brown back, and a bright yellow face and underparts. There are white feathers on the outsides of their under-tail (I’m sure there’s a more technical word for this…) – see header image. Only males have the black hoods and bibs; females have an olive-green cap.

Hoodies forage for insects in low vegetation and dense undergrowth, or catch them by HAWKING from a branch or twig. Sadly, they are one of the species that are targeted by brown-headed cowbirds, the cruel exponents of brood parasitism. These birds are rarely found transients on Abaco at present, but they are a robust species and there is evidence that their range is increasing. In some areas there are controlled (euphemism for… er… dispensed with). I’d favour that approach for Abaco, should they show signs of inflicting their evil ways on the resident breeding population of small birds. 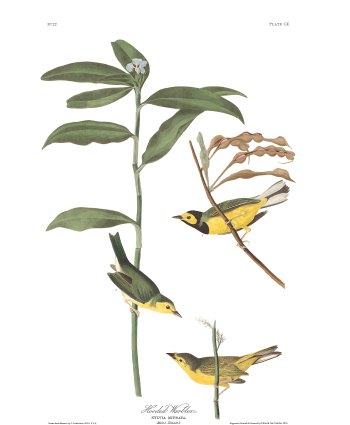 I am often at sea with the attempts to turn birdsong into to memorable words of phrases. Yes, a Bobwhite sounds a bit like a quizzical ‘Bob… White?‘. But I rarely ‘get’ the “I’d-like-a-Kalik-with-my-Conch” and suchlike. For what it is worth, I learn that for the Hooded Warbler “the song is a series of musical notes which sound like: wheeta wheeta whee-tee-oh, for which a common mnemonic is “The red, the red T-shirt” or “Come to the woods or you won’t see me“. See what I mean? Anyway, we can all agree that “the call of these birds is a loud chip.” As with so many species!

So here’s what to listen out for (recording: FLMNH). Suggestions for a suitable phrase welcome!

If you come across a bird that looks like a hooded warbler, but is motionless and makes no sound unless you squeeze it, you may have found the subspecies Audubonus stuffii, which is found mainly in the Amazon and E. Bay regions. 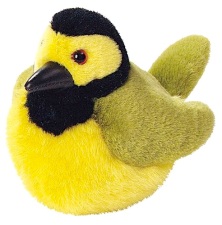 I haven’t had time to musically divert for a while. My title refers, of course, to the ‘psychedelic pop’ song by Donovan, released in the US in 1966 and the UK in early 1967. The theory is that the song relates to the supposed (but mythical) hallucinogenic high to be had from smoking dried banana skins. There are an explicit interpretation for the ‘electical banana’ which we need not go into in a family blog.  There was a rumour, now discredited, that Paul McCartney supplied the “quite rightly” in the chorus. Anyway, to chime in with the mood of the time, one of the first ‘coffee shops’ in Amsterdam was called Mellow Yellow.

One thought on “MELLOW YELLOW: HOODED WARBLERS ON ABACO”