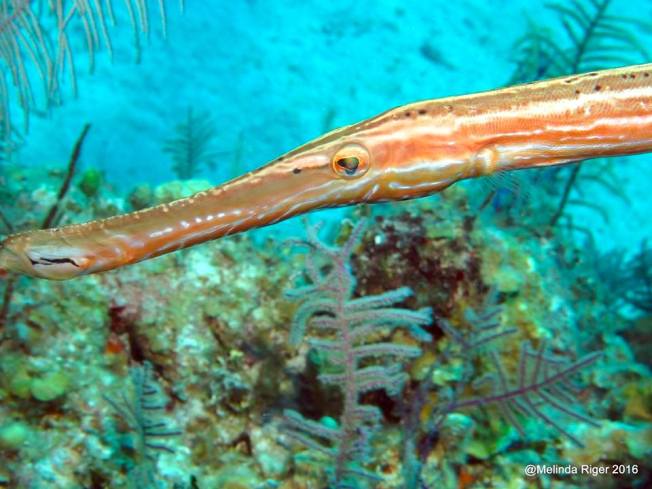 It’s been a while since the previous post in the WTF? series, dedicated to the unusual or downright weird marine creatures that, when you see them swim into in the frame of your mask, prompt the involuntary exclamation “WTF?” (What’s That Fish?). Now, in all its glory meet… The Trumpetfish. These long piscine pipes are in no way related to the President-Elect and his tank of pet fish, but perhaps more explicably to seahorses and seadragons.

Trumpetfishes Aulostomus maculatus are as happy to swim upright as more conventionally, which helps them to blend in with vertical corals and sponges on the reefs in the tropical waters of the western Atlantic. Adults may grow to 3 foot long or more. These creatures come in a variety of colours – shades of red, orange, brown, green and yellow. 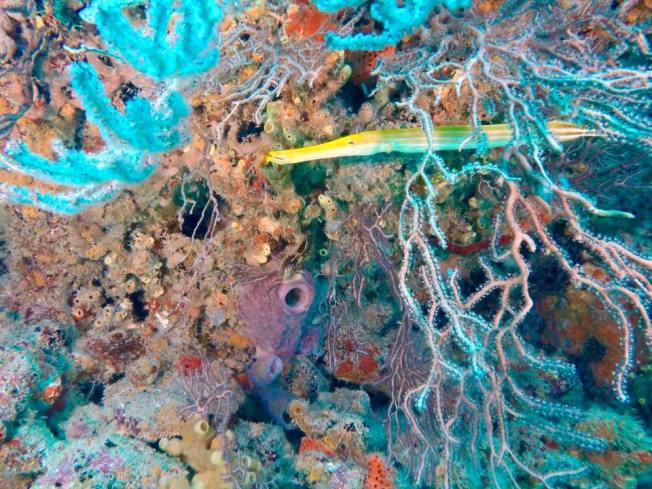 At the end of the fish’s long snout – see how far back the eyes are set – is a small mouth. Here’s how a trumpetfish goes about catching its prey (mostly small fishes):

The very excellent Peppermint Narwhal recently produced a series of posters in appreciation of particular species – and trumpetfishes and their kin in the Order syngnathidae were honoured. The PN’s cheerful website is well worth checking out for the sheer diversity of their ideas.

We are beginning to collect the makings of a decent orchestra here. The trumpetfish has a relative, the cornetfish, elsewhere in the world. The remarkable GUITARFISH has already featured in the WTF? series, as has a species of BASS, the Harlequin. And – hey! – what about the spotted DRUMFISH to lay down the beat? Maybe I need to compose a little jingle featuring these one day…