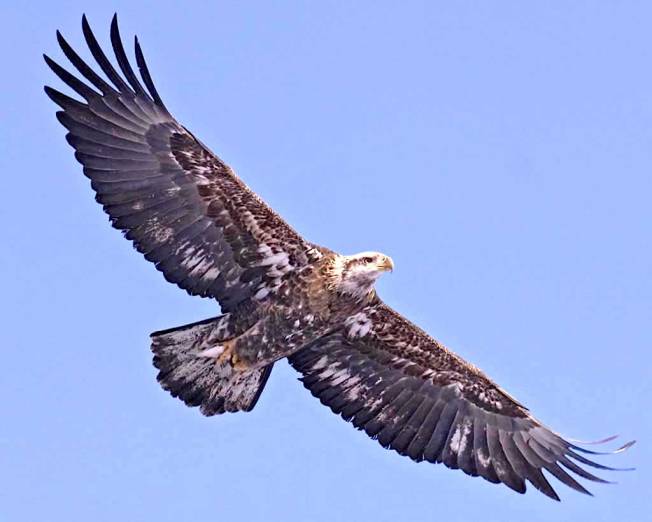 I absolutely knew this would happen. In a sense, I rather wanted it to happen. And now it has, and I have got my comeuppance. Bigly. Hugely. No sooner had I pressed ‘send‘ on my post 2 days ago bemoaning the absence of bald eagles in 2018 than corrections began to come in.

On October 25th legendary Bahamas birder Elwood Bracey and a party of 4 were looking out over the Marls from Sunset Ridge when they saw 4 birds flying high. Two were unmistakably turkey vultures; one was a magnificent frigatebird (ie totally non-eagle-ish); and the fourth was much larger, looking like a juvenile bald eagle. Any remaining doubts were dispelled when it dropped into a steep dive and smashed into the water, catching a fish in its talons, much like an osprey. There’s no room for confusion here: Woody has vast experience on Abaco and beyond – and besides, he had a powerful spotting scope and 4 birding witnesses. The ID is, as they say, solid. And it was posted on eBird. Which I should have checked. But didn’t. As Julia Roberts (qua Vivian Ward) actually did say, “Big Mistake. Huge!“ 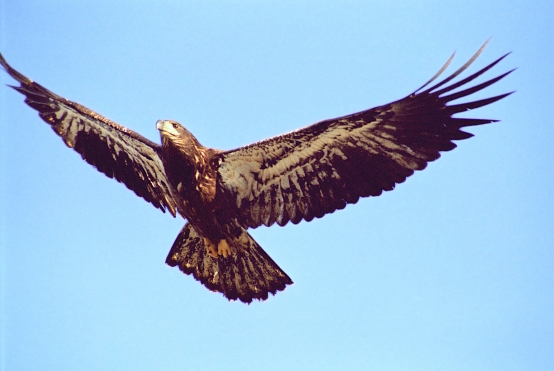 The problem here – you are ahead of me, aren’t you – is that a juvenile bald eagle does not resemble an adult. Rather than the familiar and symbolic look, they are dark brown with white flecks and mottling that changes as they grow older. A juvenile won’t even begin to look like a bald-headed adult until it is around 4 years old. Here are two comparisons of the confusing ages and stages. 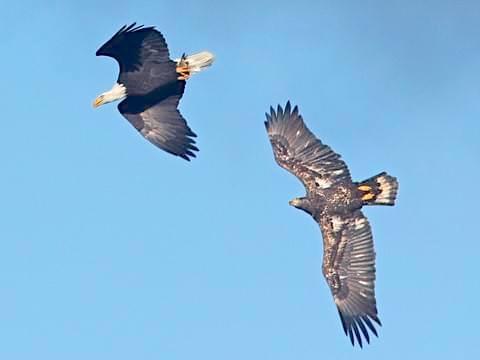 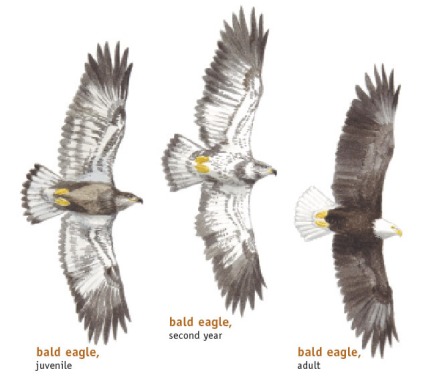 Within the last couple of weeks, a resident of Man-o-War Cay saw a huge brown bird – not an osprey, turkey vulture or red-tailed hawk – hunting chickens in the area. He told his family and identified the bird from looking at a photo of a juvenile bald eagle. I received this report – the first in time – from Charmaine Albury. Her brother was the sharp-eyed spotter. Had that been the only report, in the absence of a photo I might have had at least some doubt. Then Woody’s report arrived, a definite juvenile bald eagle only 3 weeks before, over the Marls. From there, with its spectacular eyesight it could practically have seen the individual chickens on Man-o-War. So it’s a good fit for ID.

I’d say that right now on Abaco we have a single juvenile bald eagle. It’s a vagrant, away from its usual hunting ground but unchallenged in the skies where it has ended up. There has been the usual autumn extreme weather (though Abaco has dodged the worst of it) to throw a young bird of course in the last couple of months. So, rather late in the day, we really do have an Abaco Bald Eagle for 2018. 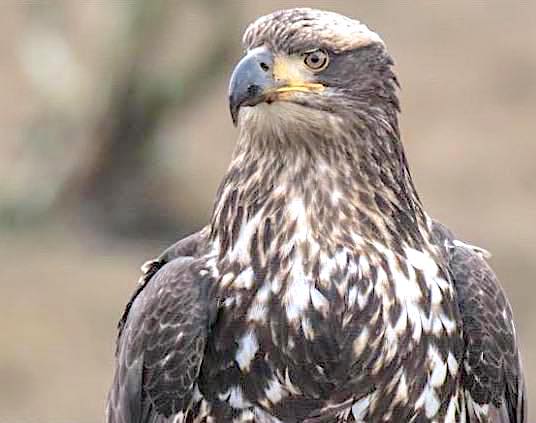 Credits: Woody and Char for the sighting reports; header image (1), Audubon; (2) wiki; (3) Allaboutbirds.com; comparative drawing, Birdwatchers’ Digest; (4) FB, source unknown (and a credit or take-down as you wish if it’s yours); cute cartoon, the most excellent Birdorable