Most of us, from time to time, might like to be under the sea, warm below the storm, swimming about the coral that lies beneath the ocean waves. An undeniably idyllic experience that is perfected by the presence of an octopus and the notional garden he lives in. Enough to make any person shout and swim about – and quite excessively at that. 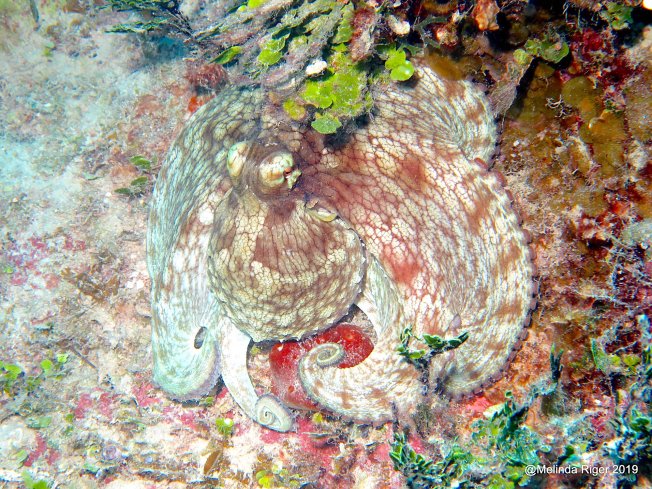 The extra ingredient here is that these photographs were taken on the reef off the southern coast of Grand Bahama last week, less than 2 months after the island (along with Abaco) was smashed up by Hurricane Dorian. Thankfully, Grand Bahama Scuba has been able to return to relative normality and run diving trips again. Moreover, fears for the reefs have proved relatively unfounded. These images suggest little damage from the massive storm. The Abaco reefs have not yet been able to be assessed in any detail.

The feature creature here was observed and photographed as it took it a octopodic wander round the reef. The vivid small fishes are out and about. The reef and its static (technically ‘sessile’) life forms –  corals, anemones and sponges –  look in good order. The octopus takes a pause to assess its surroundings before moving on to another part of the reef.

THE PLURAL(S) OF OCTOPUS REVISITED

A long time ago I wrote a quasi-learned disquisition on the correct plural for the octopus. There were at least 3 possibilities derived from Greek and Latin, all arguable but none so sensible or normal-sounding as ‘octopuses‘. The other 2 are octopi and octopodes. If you want the bother with the details check out THE PLURAL OF OCTOPUS.

There’s an aspect I missed then, through rank ignorance I’d say: I didn’t check the details of the Scientific Classification. Now that I am more ‘Linnaeus-woke’, I have two further plural candidates with impeccable credentials. Octopuses are cephalpods (‘headfeet’) of the Order Octopoda and the Family Octopodidae. These names have existed since naturalist GEORGES CUVIER (he of the beaked whale found in Bahamas waters) classified them thus in 1797.

Whether you are 9 or 90, you can never have too much of this one. If you are somewhere in the middle – or having Ringo Starr free-styling vocals doesn’t appeal – you can. Step back from the vid.

3 thoughts on “AN OCTOPUS’S GARDEN, BAHAMAS”