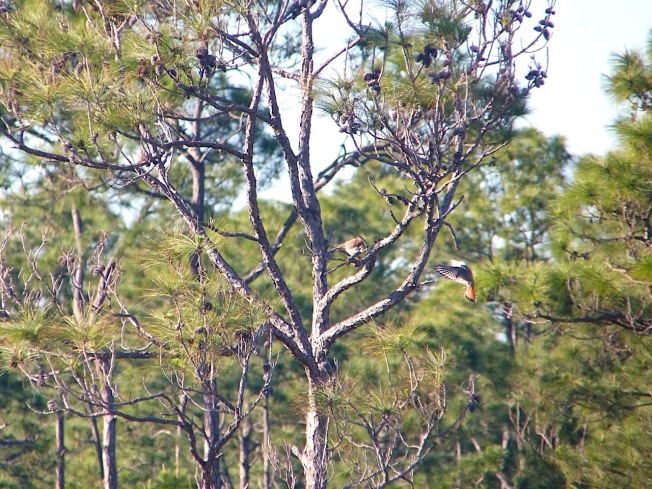 AMERICAN KESTRELS BEING CREATIVE ON ABACO

I don’t usually hold back from using (my) bad photos if there’s a reasonable excuse to do so. There’s a reason here. So here are a few bad photos. This sequence of mating kestrels was taken at a considerable distance, after I’d seen a bird fly into a pine tree out of the corner of my eye**. I couldn’t make out what species it was with the naked eye or through the viewfinder, so I took an ‘ID shot’ to enlarge later on. The image below is it – and a clear enough blur to say AMKE. Then I carried on taking pictures.

The header image came next as I realised there was another bird flying in from the right. Then the sequence below: the male mating with the female at once, dispensing with preliminaries; the male moving off along the branch; the female following a short way up the branch; then the male eventually flying away. 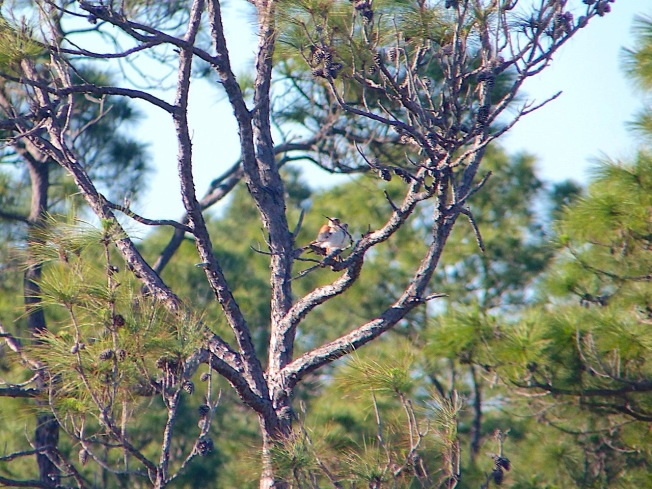 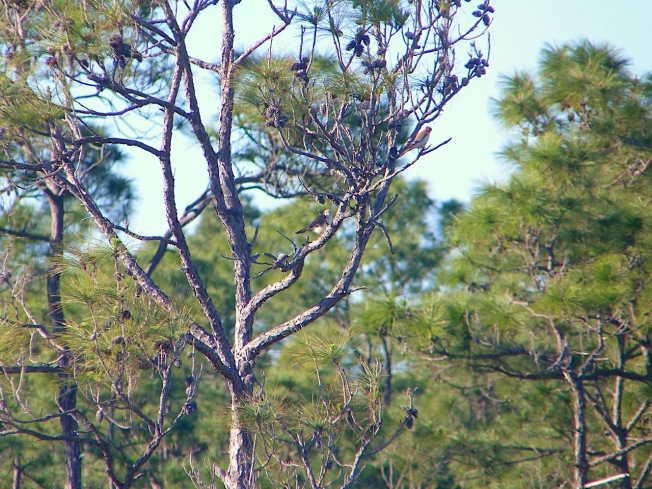 And that was that: all over in no time at all; all captured on camera; all finding its way onto the internet before you can say K@rd@shi@n tape. Let hope some good comes of it. Some baby kestrels would be good…

These photos were taken at Bahama Palm Shores, one of the go-to hotspots on Abaco for great birding including the gorgeous parrots. A new local initiative has seen the building of a tall platform overlooking a secluded lake that offers birders a great view of the birdlife there. But that’s a topic for another day.

**This is badly written, I do realise – no, it didn’t literally fly out of the corner of my eye, that’s just how I happened to see it. 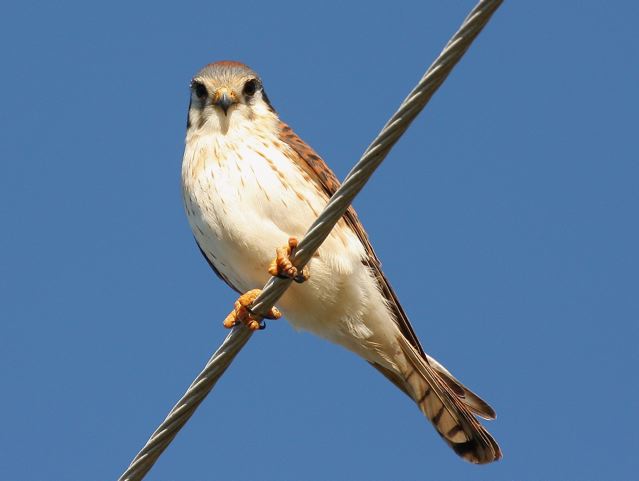 To be honest, I haven’t done these fine birds justice. Barely a mention of them for 3 years. Too much else on the land and in the water to choose from. I posted some of my photos from an outing to Sandy Point HERE. And the kestrel kinsman MERLIN got some attention a while later. Time to make amends with some more AMKE.

As many or most of the images show, utility wires (also posts) are a favourite perch for kestrels. They get an unimpeded view of the only thing that really matters in their lives – outside the breeding season, of course – PREY.

In my experience it’s quite rare to see AMKEs on the ground – unless they are in the act of ripping up some hapless rodent pinned to the earth. I was with photographer Tom Sheley when he captured this fine bird in the grass. 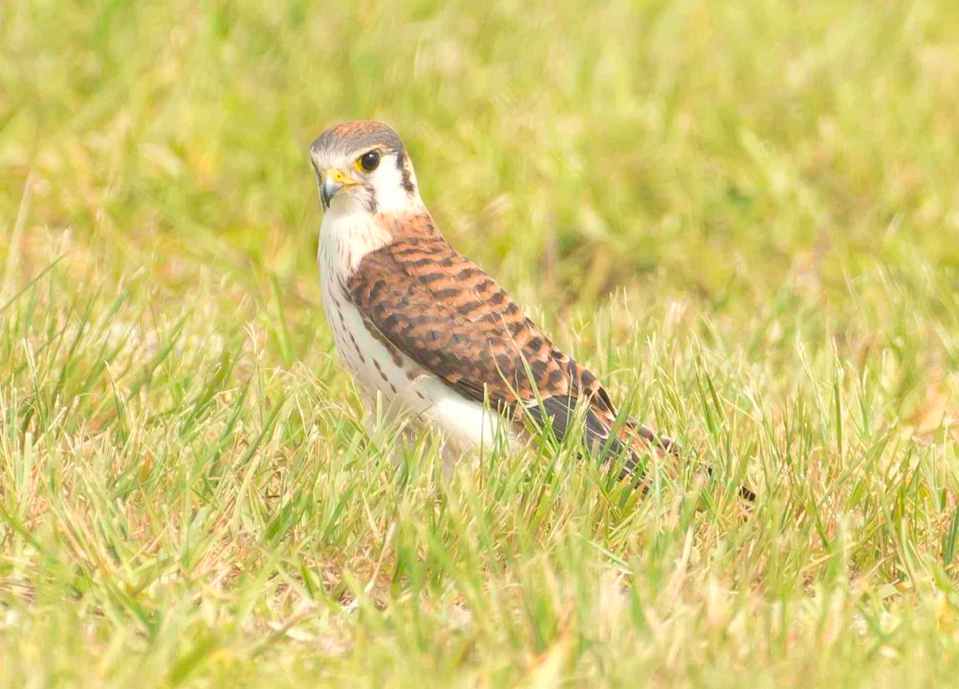 Tom also took this outstanding photo, on an overcast day, of a kestrel feeding its fledgeling a large insect.

Treasure Cay and its surrounding area makes for a good day’s birding. Although South Abaco, below Marsh Harbour, is the go-to location, TC has plenty of scope for a great variety of species from shore birds to songbirds – including the occasional Kirtland’s warbler. The golf course pond at hole #11 is well worth checking out (with permission at the club house, rarely declined unless there’s an event of some sort). So is the large brackish lake system where you may well find herons and egrets. There’s been a rare (for Abaco) pearly-eyed thrasher there recently. And you may find yourself being watched by a kestrel from a vantage point. 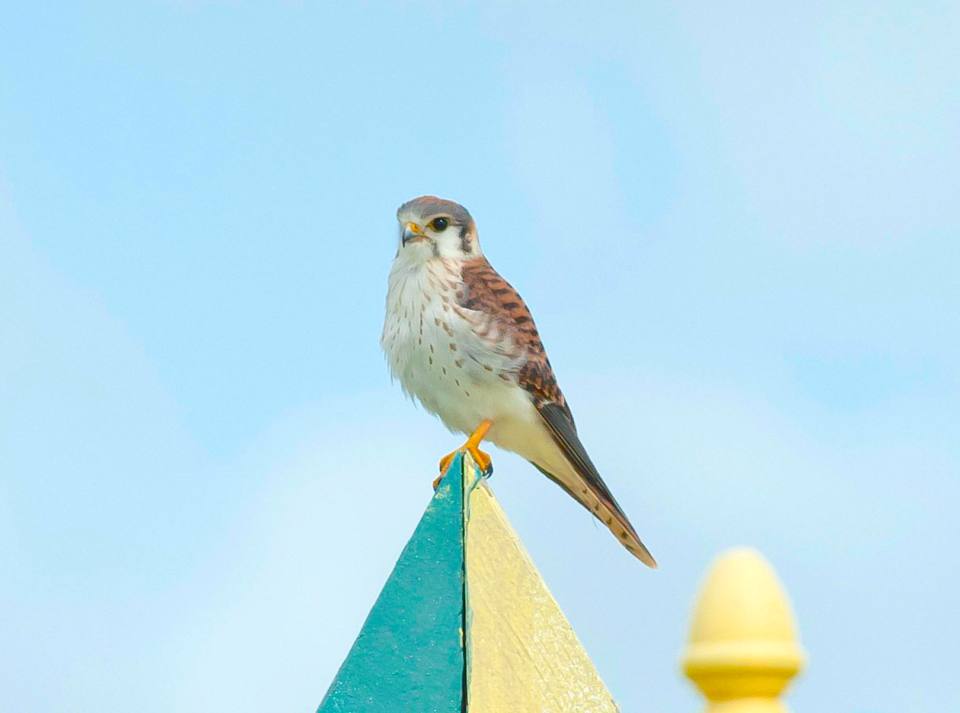 A kestrel in streamlined flight, with its feet tucked tightly under its body

Bird on the Wire

One of Leonard Cohen’s standards, and a song covered by almost everyone from Johnny Cash to Heathen Gonads*, Bird on the Wire was on the album Songs from a Room (1969). It was a favourite of Cohen’s, who once said “I always begin my concert with this song”. Covers range from the excellent via good, interesting, and strange to outright bizarre. Joe Bonamassa’s take on it (as Bird on a Wire) on Black Rock, is certainly… unusual**. 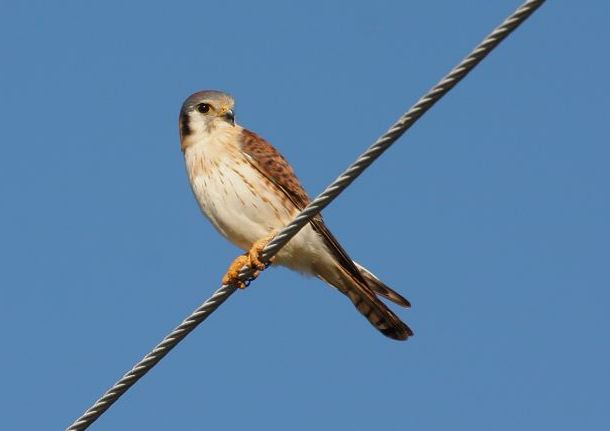