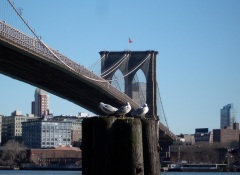 Many moons ago, I wrote about the bird species that a New Yorker might recognise during a trip to South Abaco. It would depend, of course, on the time of year and migration patterns. And whether a resident of  the Big  was remotely interested in going to Abaco to look at birds. As if! As it happens, Mrs RH is about to go to NYC, and tolerantly offered to take me as ‘trailing spouse’. Naturally, I said no at once [only joking]. So I am resurrecting the earlier material and polishing it up a bit for 2013. There is much good birding to be done in and around the City (Central Park ~ Riverside and Inwood Parks ~ Prospect Park Brooklyn ~ Jamaica Bay Wildlife Refuge ~ Staten Island ~ shorelines generally) though I shan’t be spending all my time doing that. Or even much of it. But I will see what species I can casually bag in a week.

This photo is of a ring-billed gull, taken a while back in a freezing february (-15°) on the northern end of Roosevelt Island* in the East River. The whole front of the vessel in the background was thickly coated in frozen sea-ice, which covered the entire foredeck. However, you might just as easily catch one of these gulls on a perfect sunny day on the shores of Abaco…  [*Optional tourist note: it’s a great ride there on the aerial tramway. Visit the quaint clapboard Blackwell Farmhouse, built in 1796 and recently restored – it’s the oldest surviving building in the City, nestling shyly amidst a forest of new apartment blocks]

 If you happen to live in New York, you may quite possibly spend some spare time birding in Central Park, or checking out the red-tailed hawks of Washington Square. And if you are planning a trip to Abaco, you might suddenly wonder just how different the bird life will be there. Will there be any familiar species at all?

 New York City has nearly 200 regularly recorded bird species, most of which will be found in Central Park at some time of the year, if not all through it. South Abaco has around 126 species, excluding extreme rarities and accidentals. Is there much overlap, I wondered? And the answer is that there is plenty, rather more than I expected. 61 species in common, by my reckoning, including the Great Egret below. The the most notable feature is the almost complete coincidence of warblers. 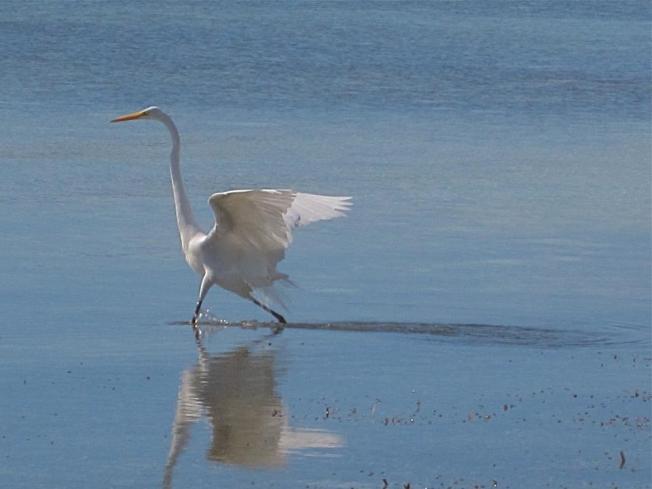  I used the excellent (but not exhaustive) AVIBASE checklist for South Abaco, now featured on the Delphi Club site in the new BIRDING  section, and worked through a comparative list of the NYC species (see the birding website links for NYC / Central Park above). The result is below: a New Yorker using the South Abaco checklist may see any of the birds ringed in red. And it would work vice versa, of course. Why New York? It’s the only other place outside Europe that I have ever ‘birded’ (only extremely casually – no book, no notes, no pishing, a few photos – just for enjoyment). Peaceful bird time in the Ramble in Central Park is time well used… Before we get to the list, here’s a bit of local NYC colour that you won’t find on Abaco – a male Northern Cardinal in the snow in February 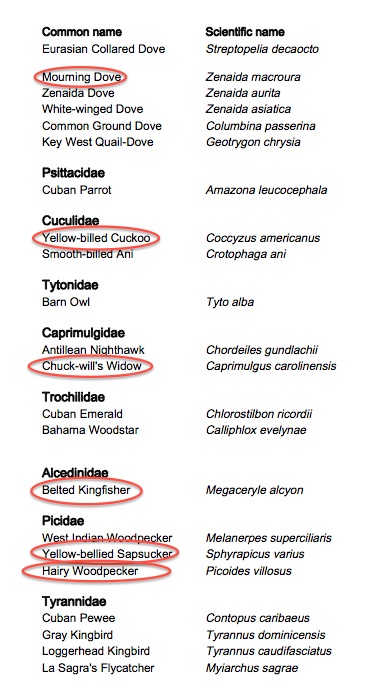  I photographed this red-tailed hawk in Central Park. We’ve seen one on Abaco in the National Park, close enough to get a really good photo of. Typically, it flew off before I could get my camera out of the truck. There’s a lesson there somewhere…

Editorial note (not necessarily a shared opinion): Abaco is so good, they only needed to name it once…