SPECIES ID NOW SOLVED! CUT TO THE CHASE BENEATH THE PHOTOS FOR DETAILS. A LATE ENTRY NOW DISPUTES THE GENDER ID, SO THE SEX CHALLENGE IS REOPENED, SO TO SPEAK

I have previously posted aids to WARBLER ID (1); WARBLER ID (2), a pitfall-fraught area that continues to baffle me despite books, online resources, futile stabs in the dark etc. For each species the male differs from the female, and both differ from juvenile / maturing birds. And this all depends to some extent on the season. Here’s a speckled warbler photographed recently at the Delphi Club, Abaco, for which there are various candidates ranging from the distinctly possible to the frankly completely-unlikely-but-astounding-if-it-turned-out-to-be-true Kirtland’s Warbler. These are seen and positively identified vanishingly rarely on Abaco – maybe one or two a year, and invariably in winter. But what if one decided to stay behind for the summer… And to those who say “Prairie, dimwit”, I reply “…but their speckles don’t cover their entire fronts”.

I’m throwing this open, because although I have a view I’d like to see what others come up with. Craig? Avian101? Avian3? Margaret H? Other birding followers? Are you out there? Leave a comment (see small-print blurb at the bottom of the post) or email me at rollingharbour.delphi@gmail.com The bird was a bit reluctant to be photographed, but I managed to get a side view, a ‘full-frontal’ and a head shot. Any ideas? 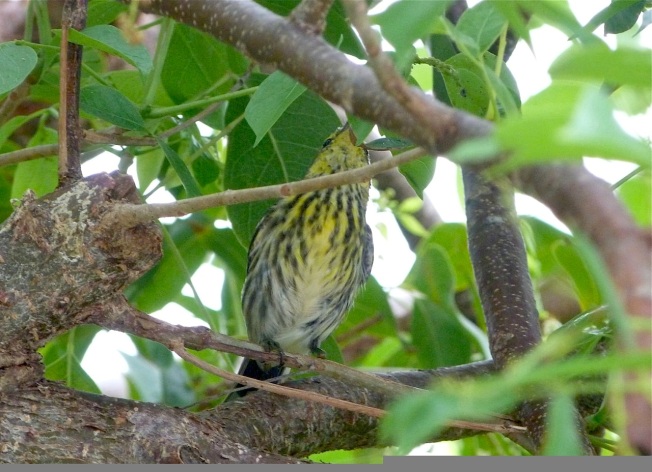 UPDATE Thanks to all who came up with suggestions – it’s interesting how opinion on warbler species varies, even with quite clear close-ups to judge from. The first past the post is… Dr Elwood D Bracey (Fl), to whom many thanks. It’s a female CAPE MAY WARBLER Dendroica tigrina. The runner-up is (amazingly) myself – I had it down for a Cape May juvenile, because I thought it looked a bit on the fluffy side… Also, its eye-patches (photo 3) are grey rather than brown, and I took their colouring to be a work in progress. There’ll be some more ID queries from our recent batch of Abaco photos – not just birds, but flowers & shells as well. All contributions will be welcome…

Oh no! What’s happening here? A late challenge has come in from Margaret H (see comments), who contends that the clearly shown patch on the bird’s cheek indicates that it is a male, not a female, Cape May. So the challenge was ended and the award given prematurely… The species is now definite, but the gender ID remains unresolved…

I’ve now heard from Alex Hughes, who writes “[I am] one of Caroline Stahala’s field techs on the parrot project this summer.  She forwarded me the photos of the warbler taken recently on Abaco.  The photos I saw are of a female Cape May Warbler, which is a great find in June!  She is certainly not going to make it to her breeding grounds, unfortunately, but still fascinating to see a boreal forest bird in the Bahamas during summer.

In a follow-up, Alex adds “I’d be very surprised if this was a male bird, due to the plumage lined up with the time of year.  This year’s juvenile birds are not big enough to make the flight south from breeding grounds yet, and wouldn’t anyways if they could.  Therefore, it would have to be adult non-breeding plumage if it were a male, also meaning this bird already molted from alternate plumage from spring, and flew south.  This seems far more unlikely to me than a female who simply didn’t make the flight, probably due to some handicap.  Either way, very cool!”

So I think that wraps it up. A female Cape May, in the right place at the wrong time. How lucky to have got close to one in the off-season. It just goes to show, eager Kirtland hunters, that any of the migratory warbler species might choose to stay behind for the summer…

“The Cape May Warbler breeds across the boreal forest of Canada and the northern United States, where the fortunes of its populations are largely tied to the availability of spruce budworms, its preferred food. Striking in appearance but poorly understood, the species spends its winters in the West Indies, collecting nectar with its unique curled, semitubular tongue”.

It is presumably using its ‘unique… tongue’ in Photo 2, inconveniently concealed by foliage so we will never know 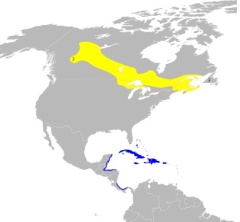 As a warbler-muddler, I am interested to see how extremely selective this species is in its preferred summer and winter latitudes. The banding is very distinct. Are they never tempted by New York? Have they never tried Disneyland?

The more sophisticated range map below shows the migration areas between the summer breeding and winter non-breeding areas. It looks as though a Cape May warbler on Abaco in June is an unexpected sighting.