IN A CLASS OF ITS OWN: THE LIMPKIN

The Limpkin has a special status: it is in a Class of its own. Actually, it is in a Family of its own in terms of strict Linnean classification. It is in the Class ‘bird’ and the Order ‘crane and rail’. But there is no other creature in its Family or Genus. So it’s on its own, bird-wise. None like it anywhere. It is ‘monotypic’.

These snail eaters are said to be named for their somewhat lame walking method on their long legs. Their long downcurved bills are shaped to act rather like tweezers when feeding on snails. I’ve never managed to get very close to one – they seem to be quite secretive. But boy, can you hear them when they decide to go for it. If you ever hear this sound – quite possibly at night – now you’ll know what creature is making it…

** Specifically, as a generic jungle noise in Tarzan films; and apparently for the hippogriff in one of the Harry Potter films.

Credits: All main photos, Michael Vaughn taken in Florida – with thanks for use permission; teaching resource Schmoop for the Linnean infographic; audio file Jerome Fischer / Xeno-Canto

“ONE OF A KIND”: LIMPKINS ON ABACO

It’s 07.50 and we are trundling up the one-mile Delphi drive towards the highway in a truck towing the skiff for a day of fishing out on the Marls. We are ‘first boat out’, so the driveway has been peaceful for a while. Suddenly, some way ahead, a dark shape detaches itself from the margin of the coppice and steps into the roadway. Large. Dark brown. Kind of awkward looking. Long legs. Long decurved bill. And the bird I’ve been waiting to see for a long time. A limpkin.

My first sighting of one of the Delphi limpkins

Grabbing the small point ‘n’ shoot I take fishing (far cheaper to drown than an iPh@ne), I leaned out of the open window and fired off some optimistic shoots at the bird, on full (yet feeble) zoom. For what they are worth**, here are a few – and will you look at the toes on the creature!

Limpkins (Aramus guarauna) have lived near the top end of the Delphi drive for several seasons, but they and I have never coincided. I haven’t even heard their weird screaming call. The guides sometimes see them when they first arrive each day, but limpkins are very shy, unsociable birds that keep themselves to themselves. Unless you see them cross a track, you might never notice them. To make matters more difficult, they are mainly “nocturnally and crepuscular”, so they are not generally active during the day.

ONE OF A KIND

The limpkin is a species of long-billed, long-legged wading bird, and is unrelated to herons, cranes and rails despite appearances. In fact, it has the honour to be the sole member of its taxonomic family. They may be found near ponds, in mangroves, in dense coppice or on the edge of pinewoods. They move jerkily, with a flickering tail and, as with any ID-cooperative bird, to see one is to know one.

Olivia Patterson of Friends of the Environment kindly sent me this video that she posted on their FB page a while back with the comment: “Do you know what a limpkin sounds like? There are a pair of them which live around the FRIENDS office. Check out this video to hear them calling out for each other. See if you can spot the limpkin! (hint… look at the pine tree on the left). Limpkins typically live near wetlands and eat snails”.

Limpkins call mainly at dusk in the night, or at dawn. The frankly somewhat tedious and repetitive cry has been phonetically rendered as “kwEEEeeer orklAAAar“, if that helps you to remember it! The racket has even achieved fame in films: it has been used for jungle sound effects in Tarzan films; and more recently for the HIPPOGRIFF in the film Harry Potter and the Prisoner of Azkaban. 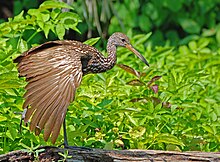