The WTF? series is aimed at shedding light on fishes that are unusual. Or very unusual. Or puzzling, dangerous and maybe less than elegant in appearance. The scorpionfish is one such. It belongs to a large family, the Scorpaenidae, and many types are found throughout the world, especially in the Pacific and Indian oceans. LIONFISH, the newcomers to the western Atlantic, are a species of scorpionfish.

Just another rock on the seabed… 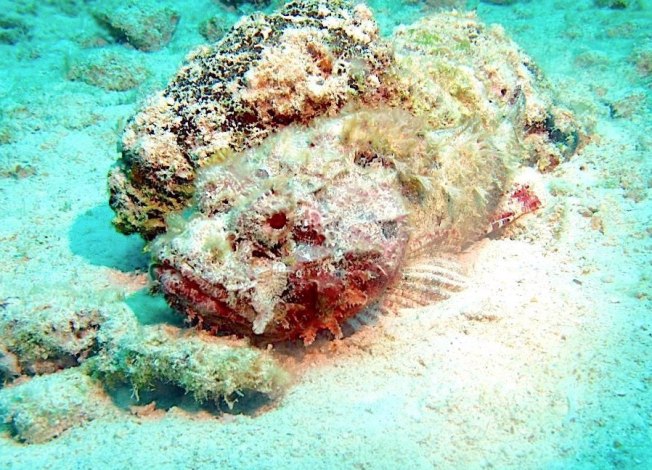 WHY ‘SCORPIONFISH’? THEY LOOK SCARY. ARE THEY DANGEROUS?

One feature common to many scorpionfish species is that they are highly venomous. As the name suggests, a sting is involved. Or several stings. These come from the creature’s sharp spines, which are coated with mucus, and are to be avoided. If you want to pet one, the dorsal, anal and pelvic fins are the ones to steer clear of – these all have venom glands at the base. The spines act like injection needles. Scorpionfish aren’t naturally aggressive (except to prey), but they know how to defend themselves if need be. If you get ‘got’, you are in for “extreme pain and burning sensation”.

DO THEY HAVE ANY OTHER TRICKS TO WATCH OUT FOR?

As many have written, scorpionfish are ‘Masters of Camouflage’. They are able to disguise themselves very effectively. Their appearance is a remarkably adapted to their surroundings, as if covered in a raggle-taggle of colourful algae. They can change colour to aid concealment. They can flick sand over themselves as they settle on the seabed. These ploys enable them to lie motionless on a coral reef or on the seabed, ready to ambush their prey. This consists mainly of small fishes and crustaceans, but really anything edible that will fit in their mouths is fair game. 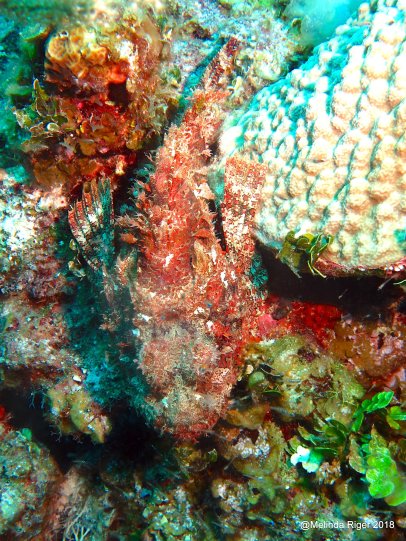 HOW DO THEY FEED?

The large mouth of scorpionfishes has a particular function. They don’t have teeth because they have no need. A scorpionfish can open its mouth and its gills simultaneously, thereby creating an instant vacuum that will suck in its prey in a flash. I have seen this described as “a nearly imperceptible split-second movement (15 milliseconds)”… 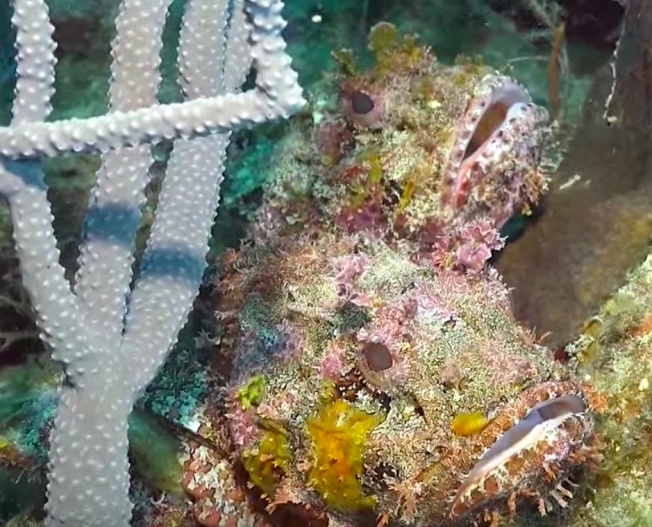 THESE SCARY MONSTERS MUST BE HUGE, RIGHT? I’M KEEPING OUT OF THE WATER

Not so fast. When all is said and done – and in my view, most disappointingly – adult Caribbean Scorpionfish grow in the range of… erm… 7 – 14 inches. So now you are reassured, here’s a great short video from Ocean Frontiers Dive Shop, who kindly shared it on YT. I’ve used a couple of illustrative stills from it too.

ANYTHING ELSE WE NEED TO KNOW?

I can do no better than to turn to Card 81 to the excellent ‘Monsters of the Deep‘ series of trading cards (the link is to my MotD page). I do realise that this is a rather unscientific approach. On the other hand these guys pack memorable information into a very short space, and do it well. Note that you can get a reflex sting from a scorpionfish for up to a week after it has died. Eat dust, earthbound scorpions.