October was a good month for bottlenose dolphins, with sightings both north and south of Marsh harbour –  however, no reported whales off Abaco at all. In complete contrast, in November no bottlenose dolphins were reported, nor any other cetaceans on the east side of Abaco. Instead, the observed activity was all around Sandy Point, with sperm whales in particular returning to the area. Increased sightings off Andros were also reported 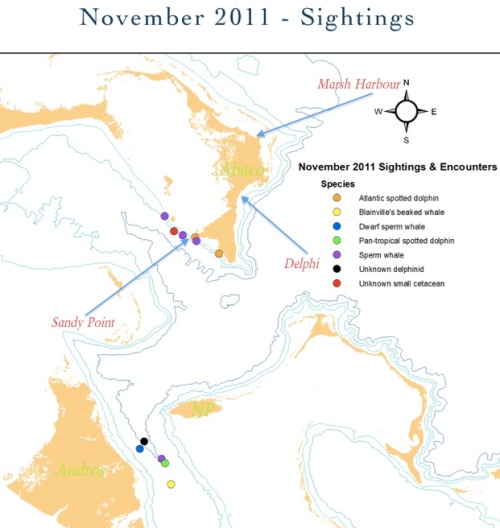 Charlotte Dunn also reports that on December 2nd 2011, BMMRO was alerted that a whale had live-stranded on Guana Cay. After attempts to re-float it, it was seen heading north past Dolphin Beach. The animal had numerous lacerations and fresh scars, and appeared “very weak with labored breathing”

The whale was later found beached at No Name Cay (north of Green Turtle Cay). At that time it was reportedly “still alive but just barely”. Unsuccessful attempts were made to get the animal back in the water.  Sadly, by evening it was dead. Photo ID confirmed it to be a FALSE KILLER WHALE Pseudorca