Following the flurry of reports and photos in June of Black-bellied Whistling Ducks on Abaco – a species never recorded here before – comes a new ‘first bird’: the Fork-Tailed Flycatcher Tyrannus savant. On September 24 Shirley Cartwright saw an unusual bird with a long dark tail and managed to get a photo of it of sufficient quality for a certain identification to be made. Never mind the photo detail, the fact that Shirley saw the bird and was able to obtain photographic confirmation is the thing. So here is the first-ever Fork-tailed Flycatcher for Abaco – and only the third for the Bahamas  (previous ones seen on New Providence and Great Inagua).

I did a little brightening and clarifying of the original image, and also tried a crop 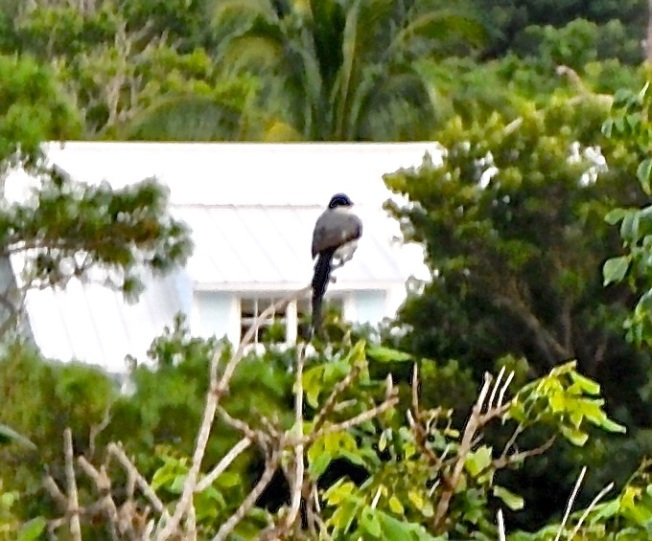 Tony White, the well-known authority on Bahamas birds, sent me the image with some information about this bird’s usual range:

“This is an interesting species as the race found in eastern US is South American and highly migratory. It breeds in Chile and Argentina. It is a frequent vagrant to USA, well over 100 records, and has appeared as far north as Nunavut, Canada. In the Austral fall (our spring) it migrates north and winters in Northern South America. Birds that appear in the USA at that time are considered overshoots. Birds that appear in our fall (Austral spring) are believed to be mostly first year birds that winter in northern South America and then fly a mirror image from the proper direction heading north instead of south. Unfortunately, the photos of the Abaco bird are not close enough to tell whether it was a young one or not. Field guides say young birds have shorter tails, but in fact there is considerable overlap in tail lengths between females and young. I strongly recommend a paper by McCaskie and Patton on this species in Western Birds 1994 Vol 25, No 3, pp 113=127. It can be found on SORA (Searchable Ornithological Research Archives).”

Treading carefully through a copyright minefield, I have dug out some illustrative images of this flycatcher, shown below. It belongs to the group known as tyrant flycatchers, which includes the kingbirds that are familiar on Abaco.

However this ‘overshoot’ range map (Audubon) reflects the fact that overshoots occur almost annually in the eastern United States seaboard and even as far north as Canada. To see these birds photographed in Connecticut (10000birds.com), click HERE. Given that the whole Florida coast is included, it’s perhaps not surprising that sooner or later the odd bird would misdirect to the northern Bahamas.

This example of the species is taken from the Crossley ID Guide to Eastern Birds (open source) . The bird in the centre with the long tail is clearly a male; I imagine the mature-looking one on the left is a female; and the one on the right with the comparatively stumpy tail, a juvenile.

It’s sometimes instructive to discover how John James Audubon saw a particular bird, so here is his FWF. While the bird is undeniably beautiful, I am not too certain of its proportion in relation to the size of the blossom. But then again, it seems to me that he didn’t always struggle for exactitude, preferring a broader, more relaxed approach to depict the birds as he saw them – and not afraid to exaggerate a characteristic for effect.

NEW INFO Woody Bracey has contacted me to point out that the male in the image above “is actually a pale mantled manachus subspecies from Central America, not the darker savana nominate subspecies from South America which Shirley photographed”. Which explains the colour difference.

The fork-tailed flycatcher has the longest tail relative to body size of any bird on earth (trails.com)

As the name suggests, this species feeds mainly on insects, although in winter it may also eat berries and the like. They will often perch on wires of fence posts. I’ve no idea if they ‘hawk’ for flies on the wing, but if so the sight of a male feeding must be wonderful. Here is an example of their song

To see a gallery of FWF photos on the excellent birding resource Oiseaux.net, click on the logo