First, a warning for anyone arriving new to this blog (hi! welcome) either on purpose or accidentally: I can’t swim very well, I hadn’t snorkelled for decades until last year, and I’d never before used a camera underwater.

That said, there is probably enough in this 2:40 min video  to warrant a quick view. As with other videos from this expedition to Fowl Cay Marine Preserve (STINGRAY / BLUE TANG), best viewed small to avoid queasiness and disorientation. You can always Pause for a breather. There are some nice fish obligingly in view from time to time, and the coral is very diverse. And I’ll know what to do this year to get better results, besides trying harder with the swimming… (Music: East Wes by Eric Johnson, off Ah Via Musicom)

These are the 2 covers, to help distinguish them if you search online. Beware, the covers are often used interchangeably… so check the edition date 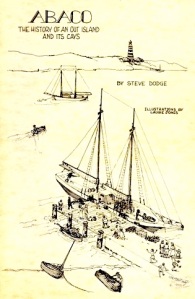 The cover image, colourfully made over for the new century, shows the Albertine ‘Adoue’ – the last Abaconian sailing mailboat (giving way to diesel power in 1923)

1st EDITION REVIEW: The first 5 chapters cover the more distant history of the Bahamas in general & Abaco in particular. Starting promisingly “Two hundred million year ago…”, the early chapters briefly cover the formation & geology of the islands and the demographic & social history, with plenty to interest and not too much detail – very informative for a non-Abaconian like me. I personally am uninterested in the boatbuilding chapter (I like the illustrations) but it will surely appeal to people who feel comfortable out of their depth. The history of gradual expansion, increased trading importance, & the less attractive sides – e.g. wrecking – are well-covered.

The final 3 chapters form the second half of the book – the 20th Century when Abaco moved from relative isolation to greater significance. Here the detail becomes denser as Abaco rapidly develops. There are parts that I skimmed, but there’s much of interest and many factual nuggets about the political developments in the later 20th century. Overall the book is an excellent primer for an Abaco novice for an overview up to the 1980s. I guess residents will also get plenty from it as well.

I haven’t seen the new edition, but I am sure it is the one to get. The Am*z*n blurb for it, which I recklessly copy, says “This expanded and updated second edition has completely new sections on Lucayan Indians, Wilson City, and contemporary Abaco, and many revisions. This is the only general, comprehensive history of Abaco, Bahamas available; it covers from the geologic formation of the Bahama Banks to the middle 1990s. Cover painting by Phil Capen,; illustrations by Laurie Jones. 112 illustrations, photographs, and maps. Appendix on boat building in Abaco”  There are plainly many more illustrations and photos than in my copy; and I notice boatbuilding has been moved to an Appendix…

CURRENT COST: Unlike most of the books I have reviewed, this book is not cheap at the moment. The new edition can be bought for $25 on Amazon.com /  £33 on Amazon.co.uk – none on Abe. The original edition is a mere $4 on Amazon.com, unfeasibly expensive on Amazon.co.uk, but reasonable on Abe