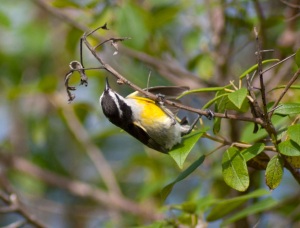 ABACO: A SANDY ISLAND (SANDY BEACHES, A SANDY POINT AND A SANDY WALKER)

This post features some great Abaco bird photos taken by Sandy Walker, a man familiar to anyone connected with the Delphi Club in any capacity at all, and well-known far and wide from Marsh Harbour to Ireland. Possibly notorious in some places… Sandy doesn’t talk about his photography much, though he has plenty to say on most topics. Here are a few of his photos taken in the last 6 months or so, and deserving a wider audience. The header image, from the Delphi garden, shows a Bananaquit in characteristic feeding mode.

A great picture of feeding time, with the huge chick already seeming to have outgrown the parent – apart from its rather stumpy tail

These shy  birds are reclusive by nature and relatively hard to photograph. They tend to lurk in the undergrowth or half-hidden on water margins. If they are caught in the open, they tend to run in a somewhat cartoonish sort of way. This one was having a good dig in the mud for food.

Large birds of the shoreline and mangrove swamps, and classed with sandpipers. In flight, they have eye-catching wing stripes that Sandy has captured with a bit of camera sharp-shooting. You can see more Willets HERE 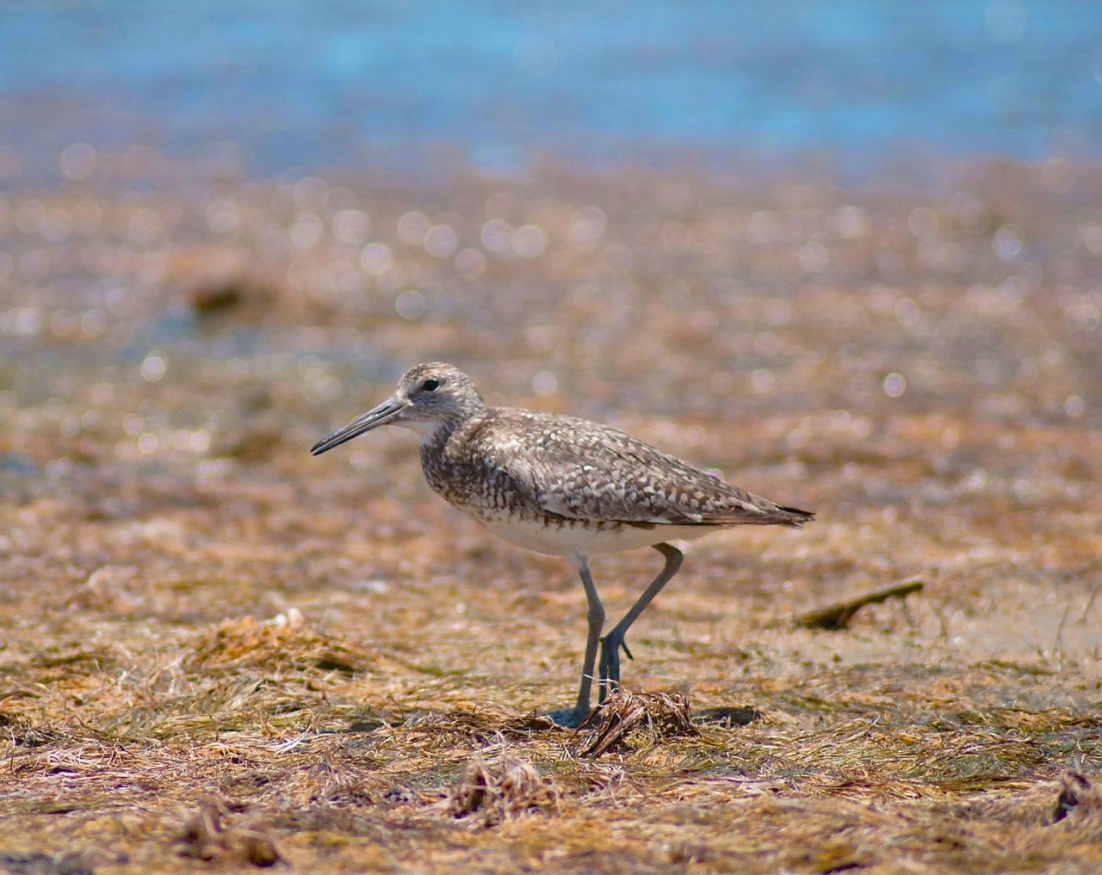 I was with Sandy when he took this photo during an amazing early evening feeding display of these birds. A hundred or more were swooping and jinking, making the most of an evening fly hatch. Sometimes they flew very close to our heads, make a whirring sound as they passed. Their speed and jagging flight made them very hard to take. I hardly got one in my viewfinder at all, but Sandy is an excellent shot of a different sort, so I guess aiming isn’t a problem for him… 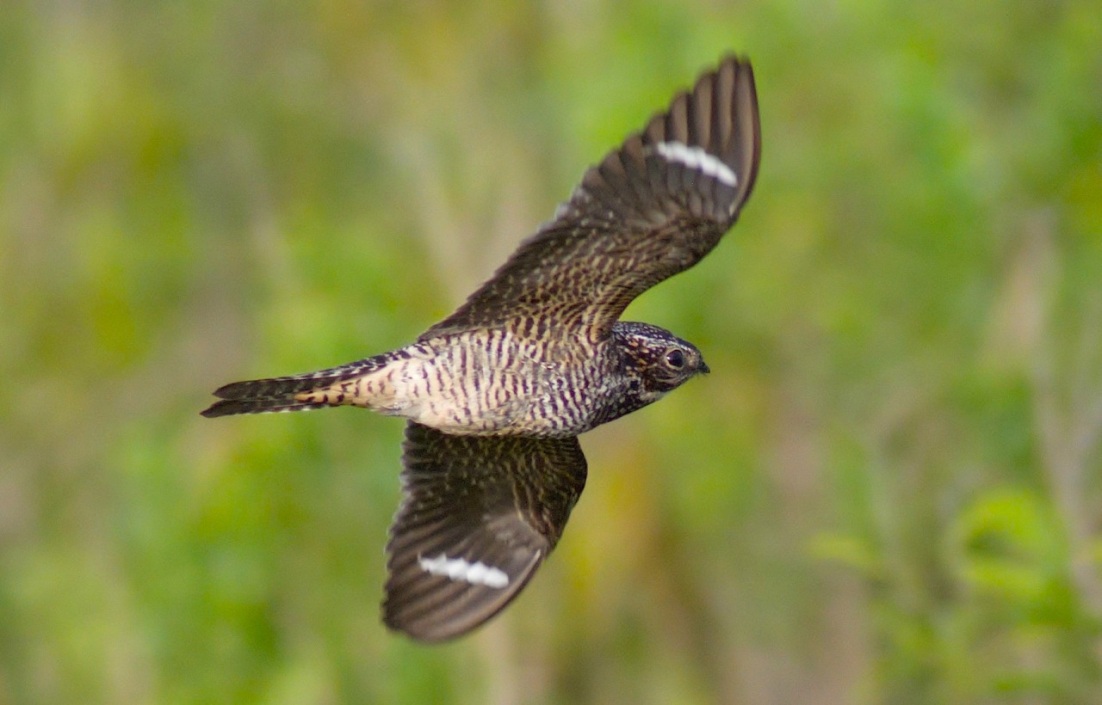 I love these handsome birds, distinguishable from all other white herons and egrets (in some cases as white morphs) by their astonishing bright yellow feet. These are so vivid that they are often  clearly visible when a snowy egret is standing in the water. This one was taken by the jetty at a local pond, a wonderful and secluded place to see water birds of many varieties, including rarities. 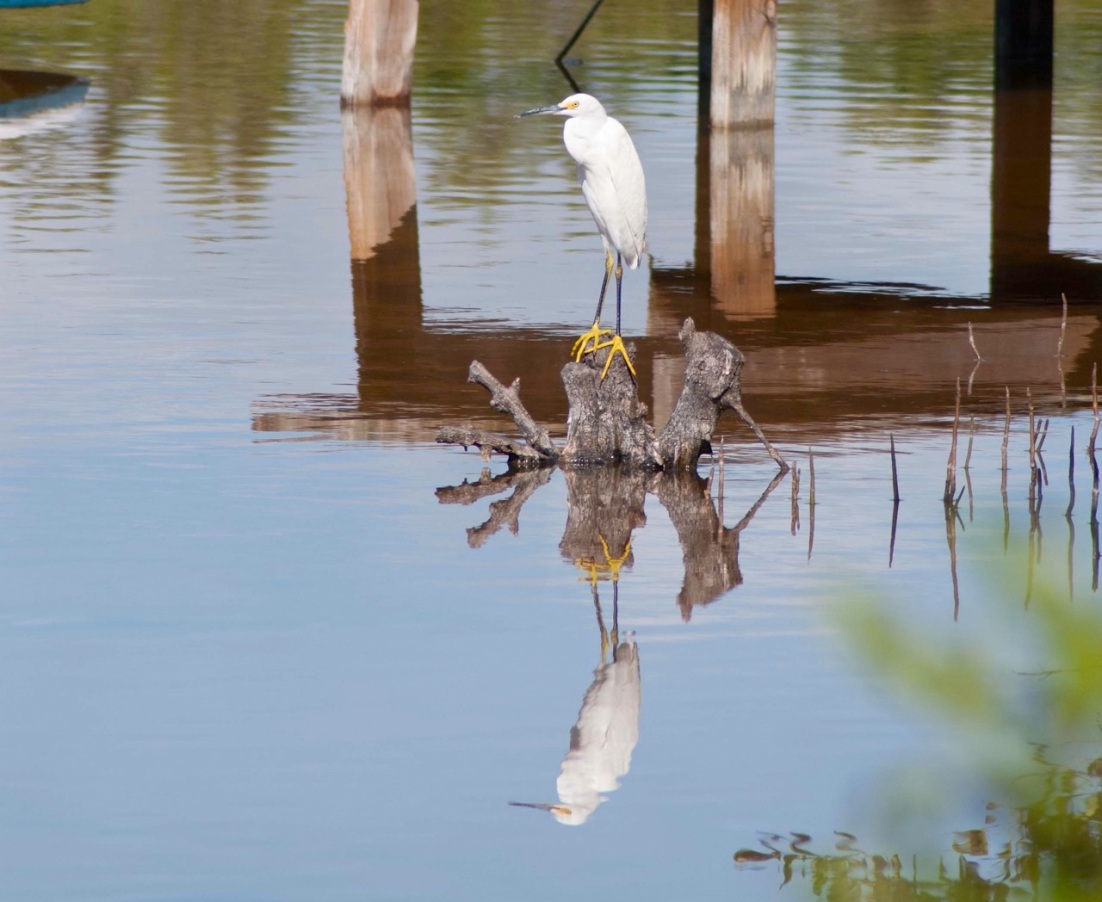 All images (except this one): Sandy Walker, with thanks 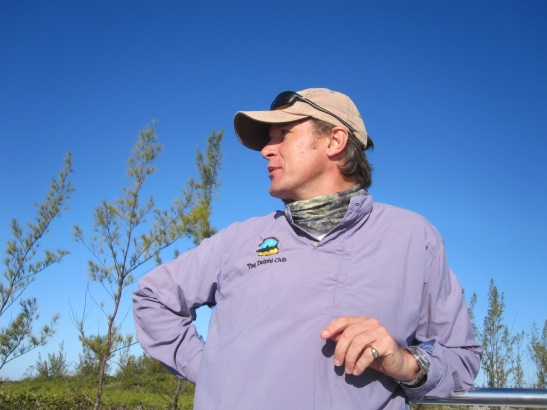 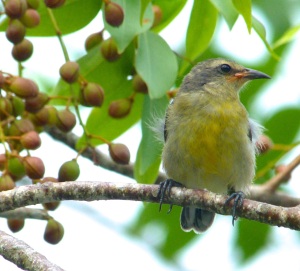 I’m not generally into whimsy and such stuff BUT… I can’t get enough of small bananaquits (Coereba flaveola). I’ve featured them before HERE and HERE AGAIN, but then I see another one, take some photos, and awwwwww – look at its little fluffy feathers… and its tiny sharp claws! The two shown below are summer babies. They aren’t really babies, though, are they? Teenagers, more like. Like many Abaco birds – especially the parrots – they are keen on the fruit of the Gumbo Limbo tree Bursera simaruba shown here. They also love flowers, piecing the base with their beaks to get at the nectar. They are quite as happy on a feeder – or indeed sipping sugar water from a hummingbird feeder, living up to their nickname ‘sugar bird’.

“Watching you watching me…” 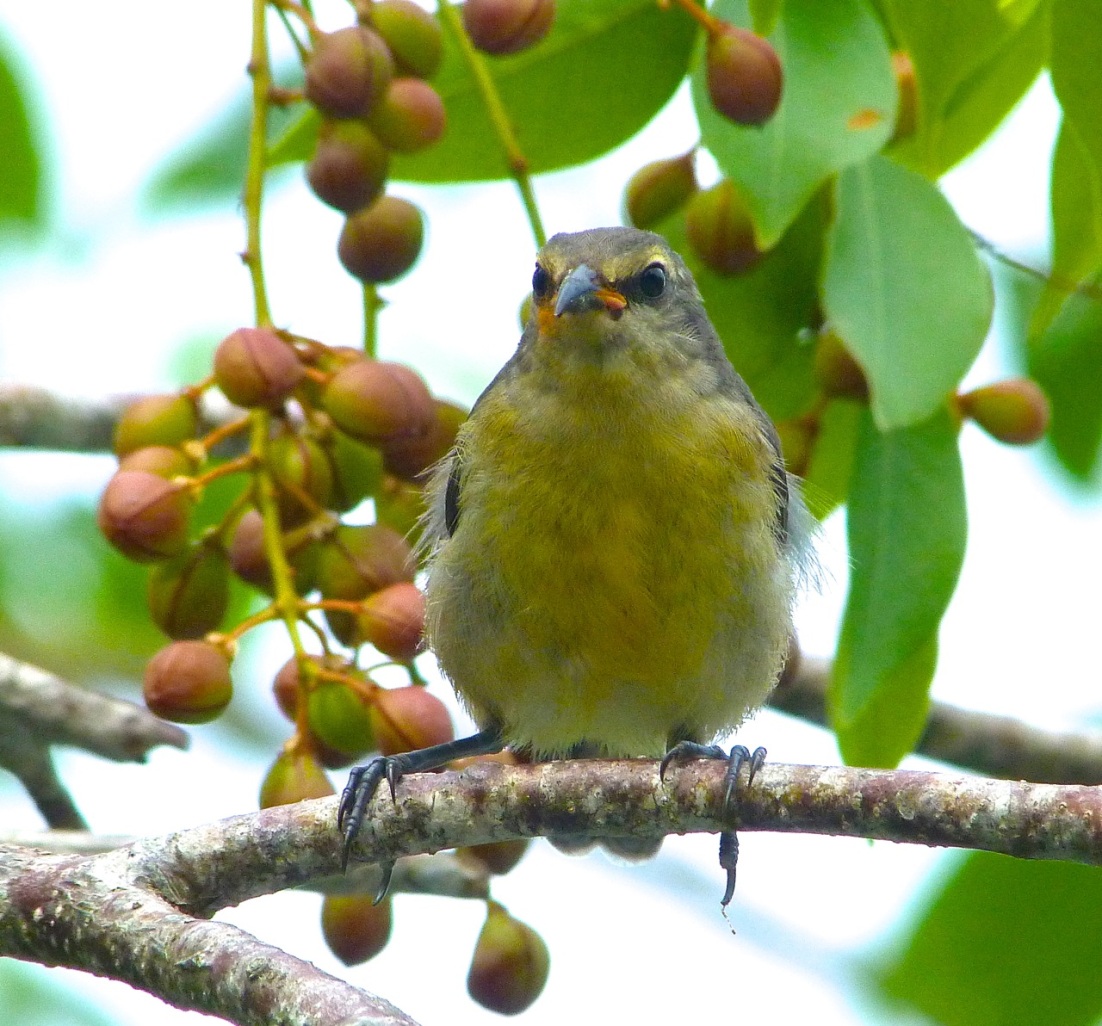 This second bird is a bit older, and has developed some smart citrus lemon shoulder flashes. Bananaquits have many regional variations throughout the caribbean and beyond. These birds are, or were, generally lumped in with the tanager species. They have an official classification of ‘uncertain placement’ in the taxonomic scheme for now, while their exact status is debated. Not that anyone watching them worries about that sort of technicality.

Here is what a Bahamas bananaquit sounds like, recorded on Andros (Credit: Paul Driver at Xeno-Canto)

A pair of adult bananaquits

These small birds are a favourite of mine. They flicker around, cheeping cheerfully, yet are often quite hard to see in the coppice even if you think you are looking exactly where the sound is coming from.

Bananaquits are passerines, with an uncertain species designation. Over the years they have been officially reclassified three times. Some include them loosely with tanagers; others put them in their own family group; others argue that there are 3 distinct species. Basically, there is no universal consensus. There is some satisfaction, in a vastly over-classified world, in one small bird resisting man’s pigeon-holing (so to speak). It’s a tiny taxonomic enigma.

Among the islands of the West Indies there are several subspecies of bananaquit, with marked variations of appearance and size too tedious to relate. The best news is that “…the Bahamas Bananaquit with a whitish throat and upper chest may be a separate species…”.

The Bananaquit’s slender, curved bill is designed for taking nectar from flowers. It can pierce flowers from the side to reach the nectar, or use its bill to puncture fruit. It also eats small insects. The birds are tame, and love feeders, especially hummingbird feeders filled with sugar-water – hence their nickname “sugar bird”. They breed all year round. This is the characteristic chirrup of the Bahamas Bananaquit (credit: Xeno-Canto)

This small juvenile was happily feeding by itself near the Delphi Club, Abaco. Its mother then flew onto a nearby branch, and I’m afraid to say that the child indulged in a shameful charade of “Hungry! Feed Me! Now!” 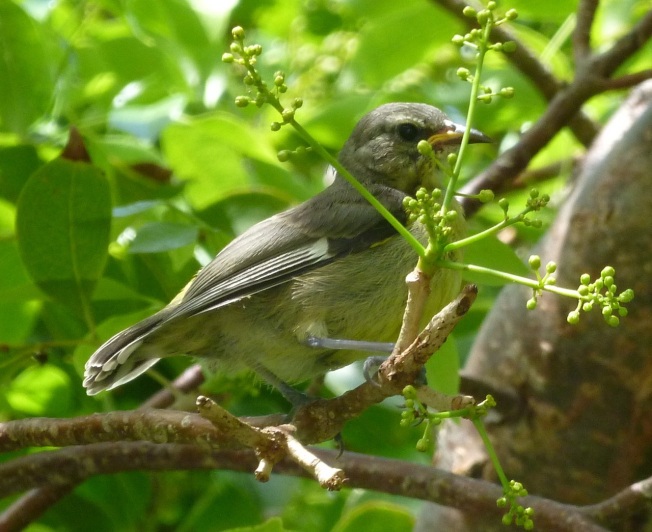 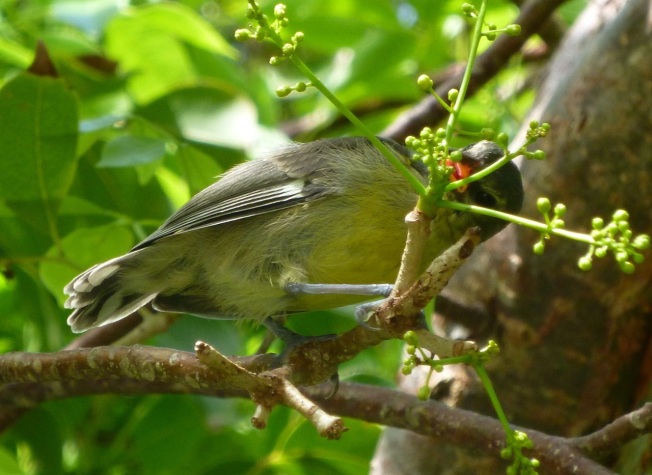 This could be fun. Unless no one bothers to participate. I’ve just found out how to do this, having wondered for a while what the little widget did. There may be some way for you to put your own choice, but I am a slow learner. Another time maybe. For now,  you can positively opt out of the nominated birds – your very own protest vote. Or you can all just ignore the whole thing, as I rather fear may happen… If this prototype bombs, I’ve only wasted a couple of hours, after all…

UPDATE: After a week, the order is (1) Bahama Woodstar (2) Abaco Parrot (3) Western Spindalis (4=) Banaquit and ‘Sorry…’ The poor Tropicbird got no votes and has been removed… 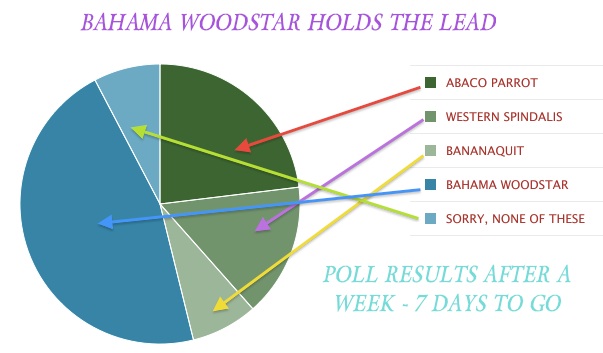 There is a wealth of birdlife on the Delphi doorstep. You don’t even have to go out of the front gateway to find it. You’ll hear a great many more birds than you ever see – many are small and very hard to spot in the bushes, even when you can hear loud chirrups. Here are a few examples of what you might see, all taken within the Club precincts

TURKEY VULTURES, ever present, wheeling above the bay, sometimes in flocks of 20 or more. Their grace in flight is slightly spoiled by the knowledge that their heads are red, wrinkled, bald and… frankly unattractive. You may also see them hunched on a dead branch along the drive (second photo) 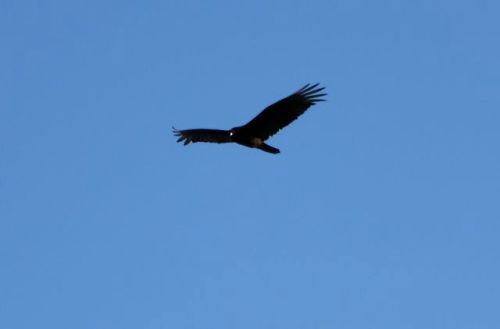 LOGGERHEAD KINGBIRDS, one of several types of ‘Tyrant Flycatcher’, so-called because of their robust attitude to defending their territory. The first one is on the far side of the pool; the second is taken from the verandah.

WEST INDIAN WOODPECKER, resident initially under the verandah eaves before moving to the upscale nesting box further along. Often seen during the day in the gardens, sometimes shouting raucously: the second photo is near the pool 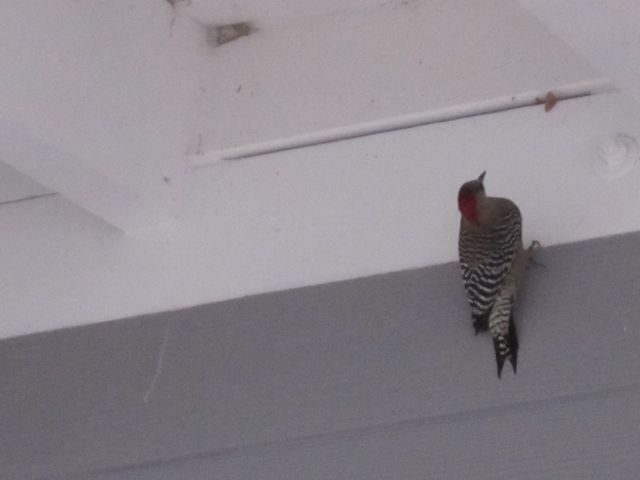 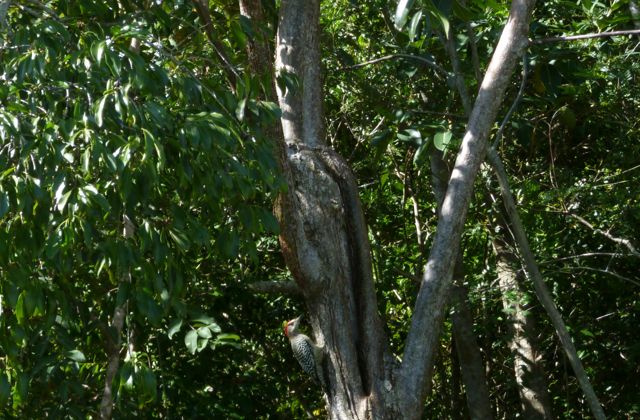 ANTILLEAN BULLFINCH (previously wrongly ID’d as American Redstart – thanks CN) I’d never seen one of these before, nor indeed heard of them. This one was photographed in the trees along the drive while I was in fact looking for another bird altogether… 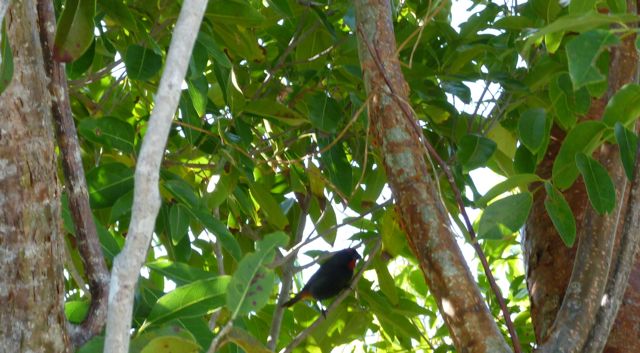 THICK-BILLED VIREO, one of several vireo species. Believe me, they are much less blurry in real life than here… They chirp a lot and seem quite tame. 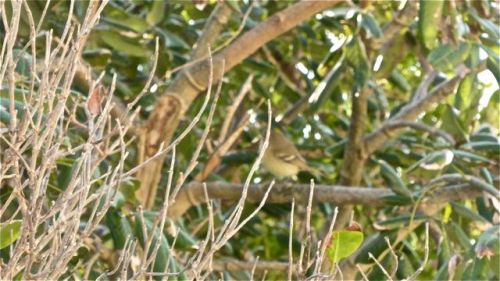 BANANAQUIT My second favourite bird (after the western spindalis). Smart black and white heads, yellow underparts, and a sharply curved beak used to pierce the base of flowers for nectar. They aren’t choosy though, and eat insects and fruit too. Very chirpy, and VERY hard to see in the bushes, even when you can clearly hear exactly where you think it must be… Look for moving foliage. This one was in the shrubs by the main staircase.They sound like this (credit Xeno-canto.org)

NORTHERN MOCKING BIRD at a distance… above the skiff park. We heard it singing melodiously. ID (in close up – click on image for a marginally better view) from cocked and slightly spread tail, and (you won’t see this) white wing markings. This species is apparently beginning to displace the larger but unaggressive Bahama Mockingbird. 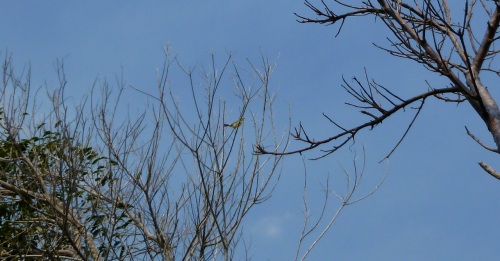 NORTHERN PARULA Small yellow warbler, of which there are many types. This is the one that unwisely tried to fly into the Great Room through the plate glass, and had to be revived by Sandy. It perked up quite quickly, and flew off none the worse for its encounter either with the glass or Sandy…

HUMMINGBIRDS are a fascinating topic in themselves, and I’ll post about them separately. There is the Cuban Emerald and the endemic Bahama Woodstar, both of which can be seen at Delphi (though the latter are rare where the former predominate). There is a 3rd type of hummer on Abaco, which I will leave you with for now: