HELLO, HANDSOME! WESTERN SPINDALIS IN THE MOOD FOR LURVE…

Nearly two years ago, when this blog was still in its mewling infancy, I posted about one of my favourite small birds on Abaco, the WESTERN SPINDALIS (Spindalis zena, formerly known as the Stripe-headed Tanager). It is a strikingly handsome creature by any standards, often seen posing ‘tall’ on a branch looking splendid in its orange, black and white livery. 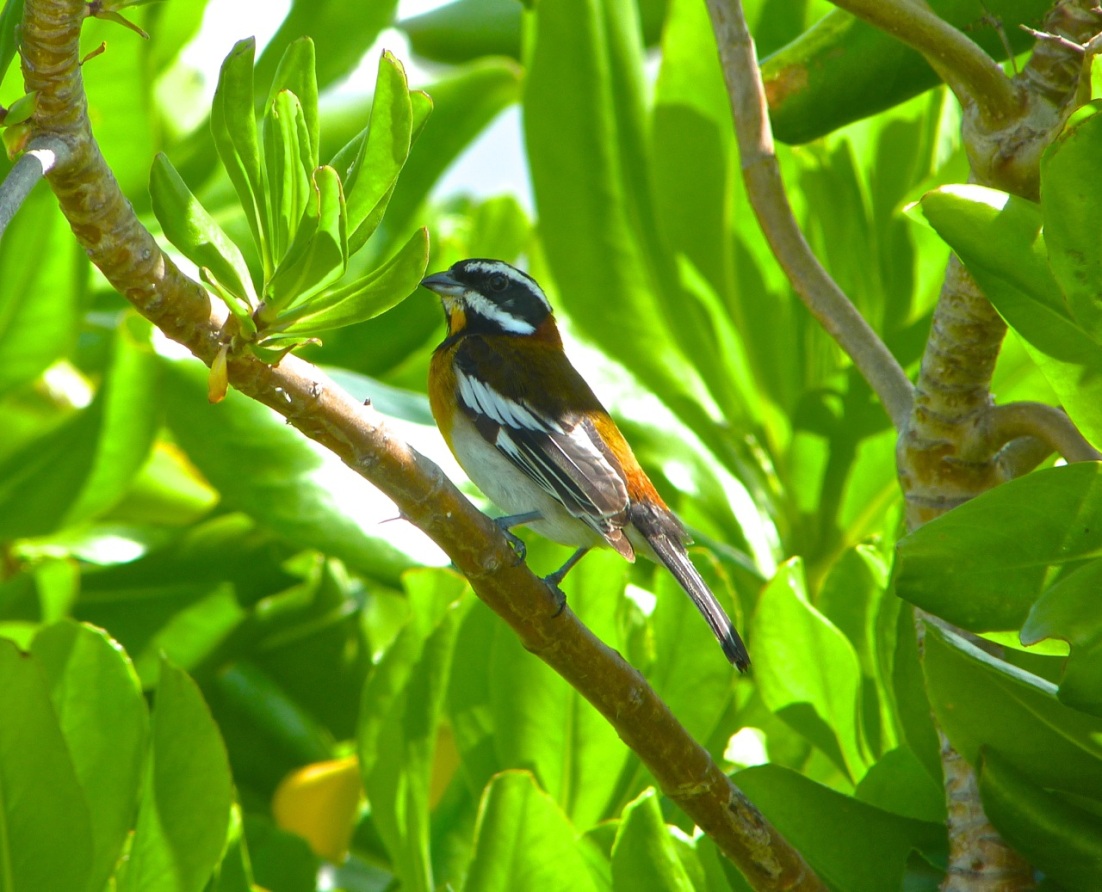 The  spindalis is one of the birds to look out for if you are walking along one of the drives at Delphi, or (*recommended 1/2 hour stroll*) walking the drive circuit. You’ll see them in the coppice or in the undergrowth alongside the drives in the pine forest area, almost certainly a little way in from the front. We spotted one quite close to the Highway, looking most decorative in the greenery. This one had an uncharacteristic hunched look about him, and we soon discovered why – he was courting. Not the black-faced grassquit near the bottom of the photo, but a female spindalis well-hidden low down and further back in the undergrowth to the left. So we edged nearer to get a better look.

You’ll see that this male bird’s hunched posture has produced a rather impressive neck ruff, an adornment presumably irresistible to female spindalises. Both birds were ‘chucking’ softly to each other, and the male turned his head regularly to show off his glories from all angles.

I can’t unfortunately reveal the outcome of this encounter. We never saw the female, and we had probably got too close for her to feel comfortable about breaking cover. The male, however, was too absorbed refining his pulling techniques to be greatly bothered by our presence, though he did keep a beady black eye on us. Is this male preoccupation when courting found in other animal species, I wonder? Reader, we made our excuses and left…

ABACO BIRD ID CHALLENGE (FOR NON-EXPERTS ONLY): THE SOLUTION

This small bird (Oh. I’ve given away the size already) was photographed in June. I was looking through a batch of downloaded photos recently. When I saw it again, I knew at once which bird species it belonged to – but not the specific make. I did some research and came up with the answer. I’d nailed the ID – or thought I had. The photo was a long shot which I had to enlarge to see the markings more clearly, hence a lower overall quality. I sent the jpeg to an officially  avian-knowledgeable person for confirmation (hi, Alex!). The reply was swift. No, not the bird ‘swift’, I mean it was quick. It turns out that I was, as so often, completely wrong. Barking up the wrong tree. Chirping in the wrong nest. Perched on the wrong branch…

I’d say there are two definitely plausible candidates, and you may even think of others. So what bird is it? You can click on it to enlarge it. Please join in and give your answer using ‘leave a comment’ (tiny letters at the end of this post) or email rollingharbour.delphi@gmail.com  Or, if you are seeing this on Facebook, please reply on that.

UPDATE Thanks for emails. Opinion is divided, but one of the 2 candidates is definitely ahead… I’ll leave this over the weekend

SOLUTION Of the few replies, most were right. One or 2 were (wrongly) with me – I reckoned it was a SWAINSON’S WARBLER. No one suggested turkey vulture. The correct ID, and the reasons for it, were provided by Alex Hughes, to whom thanks: “The first bird is a BLACK-WHISKERED VIREO.  The black supercilium going through the eye and the heavy bill are good marks, which can resemble a Swainson’s Warbler, but a clinching mark here is the yellow wash underneath the tail at the rear of the bird”.

While I am dealing with mystery birds, I posted photos of a very sweet little JUVENILE  BANANAQUIT about a month ago. At the end I added a photo, which again has since been positively identified (thanks again, Alex)

“Finally, this bird was a distance shot. At the time, it looked larger than a bananaquit – more Loggerhead Kingbird-sized. Before I had downloaded the image and could see it clearly [rather than on the screen on the back of the camera], I’d wondered about a mangrove cuckoo. Then I saw at once that it didn’t tick the right boxes. So I decided it must just be a huge bananaquit with an orange rather than yellow front. If it’s anything else (a rare hybrid spindalisquit?), please say so!” It is a indeed bananaquit, but in my limited experience I have never seen one with a spindalis-orange front. Can anyone say if that is a common colouring on Abaco, or unusual?

This could be fun. Unless no one bothers to participate. I’ve just found out how to do this, having wondered for a while what the little widget did. There may be some way for you to put your own choice, but I am a slow learner. Another time maybe. For now,  you can positively opt out of the nominated birds – your very own protest vote. Or you can all just ignore the whole thing, as I rather fear may happen… If this prototype bombs, I’ve only wasted a couple of hours, after all…

UPDATE: After a week, the order is (1) Bahama Woodstar (2) Abaco Parrot (3) Western Spindalis (4=) Banaquit and ‘Sorry…’ The poor Tropicbird got no votes and has been removed…

The western spindalis (or stripe-headed tanager)  is my favourite bird on Abaco. These 3 birds were all at Bahama Palm Shores. Although this species has featured in at least one earlier post, it’s time for another showing, this time with added sound (credit Xeno-canto.org) 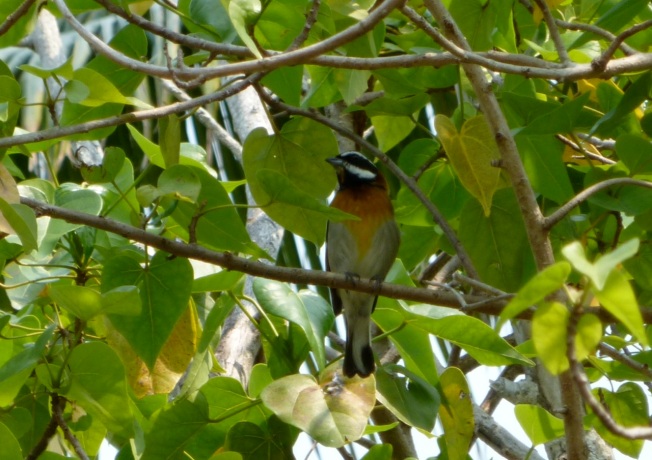 During our parrot observations, we had plenty of opportunity to see other birdlife. We were especially fortunate to be able to visit a large and very beautiful private garden on the shoreline at Bahama Palm Shores which Ricky showed us round; and to meet the benevolent owner who permits this intrusion. We saw between us a wide variety of birds in or near the garden, of which these are a small sample – starting with my favourite bird of all 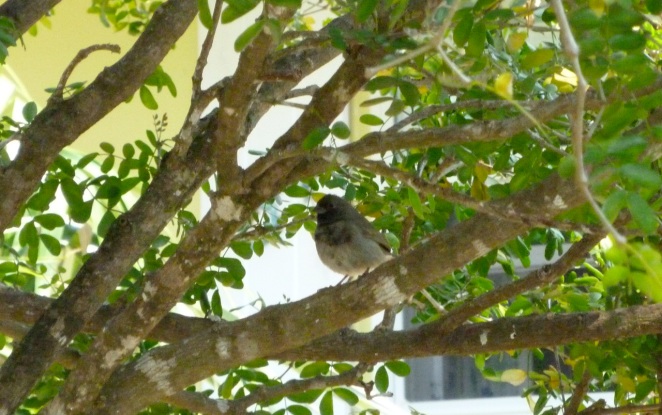 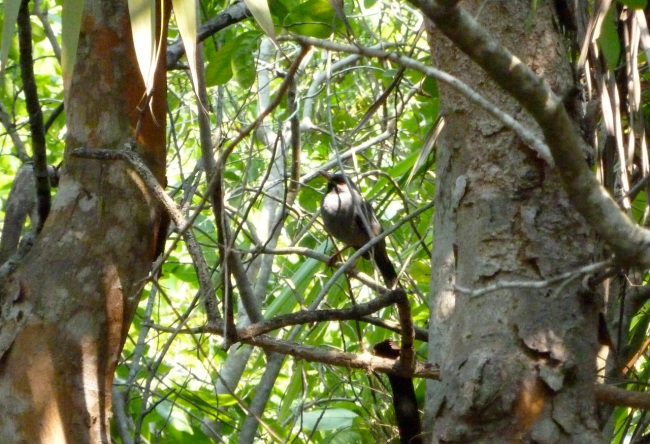 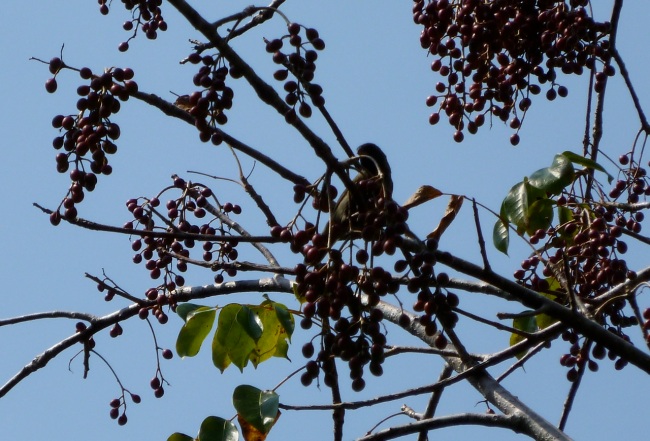 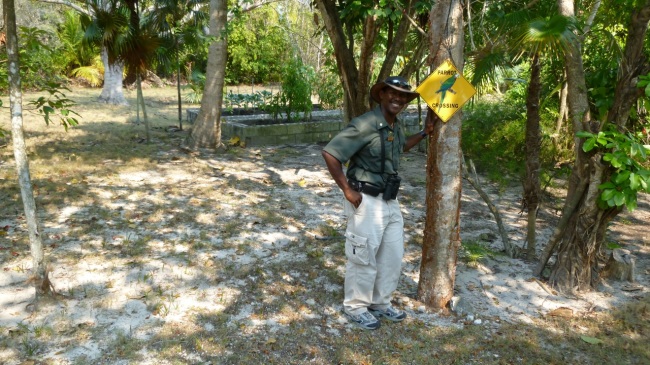 This Spring has seen a number of birds – possibly tempted by Gareth’s cuisine – flying hard into the windows / doors of the Great Room and falling stunned onto the verandah. Luckily, Sandy has sometimes been on hand to scoop them up and gently let them come to their senses before releasing them.

NORTHERN PARULA: one of a large number of yellowy warbler types around Delphi

The Parula ID was confirmed by Craig Nash (see side-bar BLOGROLL for his Delphi birding links) and he has supplied his own much better photo of one, photographed in one of the drives – see CONTRIBUTIONS / PHOTOGRAPHS