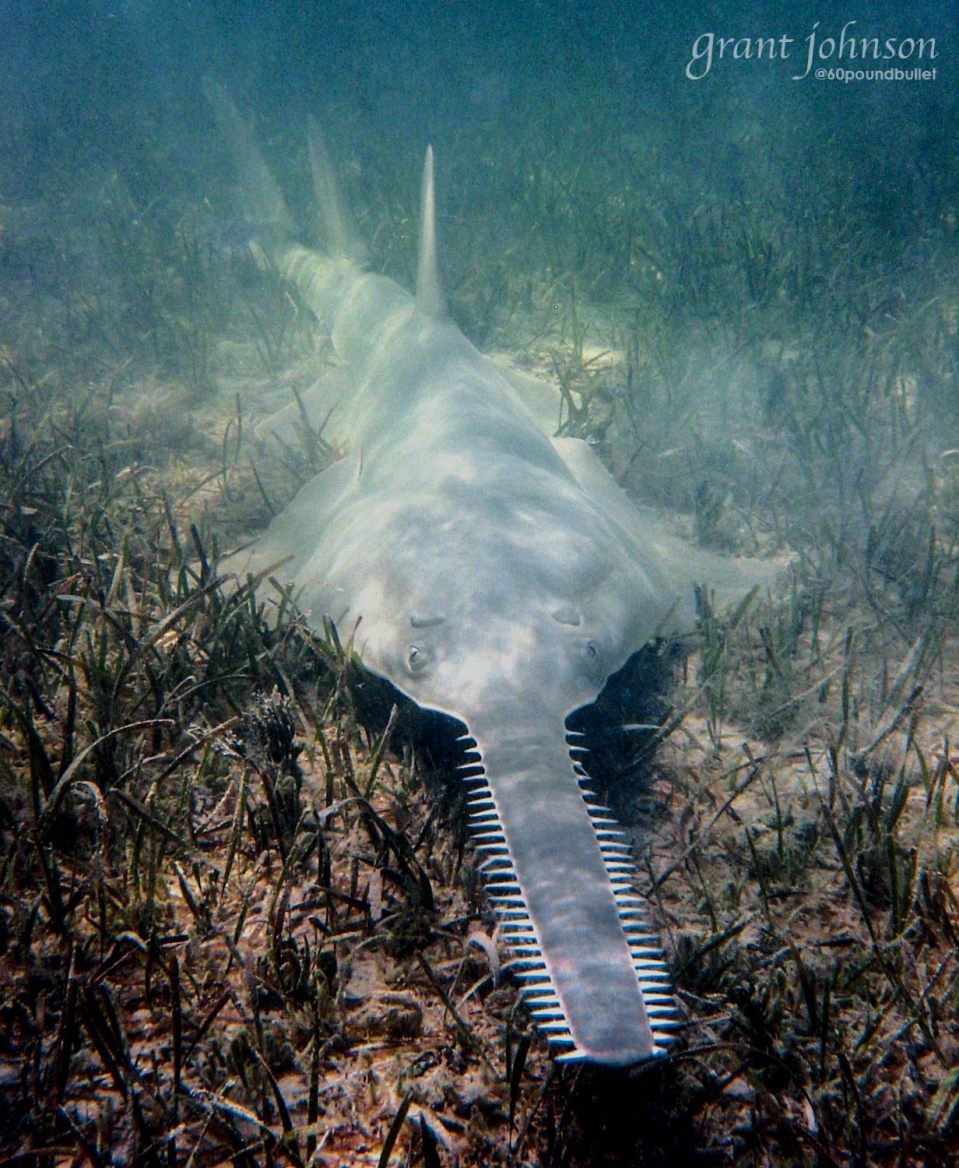 The word ‘awesome’ – a word of Biblical origin and medieval usage connoting an experience of wonderment with an element of dread* – lost its power once it became the common verbal currency for describing the offer of a beer, a photograph of a sulky cat, or a so-so pub band. Where to turn for something truly momentous? Oh, actually that might do nicely. Breathtaking, astounding, astonishing, awe-inspiring, staggering, extraordinary, stupendous, and spectacular are examples of synonyms that have retained at least some of their power. And perhaps ‘mind-blowing’, though it’s a bit substance-tinged. ‘Amazing’ has pretty much gone the way of awesome. Amazeballs and badass? Let’s not!

Ok. Having got that linguistic grump out of the way (index under ‘English Language, debasement of, modern usage in), here’s the real deal: a truly phenomenal short video of a smalltooth sawfish Pristis pectinata safely giving live birth in the wild to her 5 babies (which are called pups) on Andros during a FSU research trip. The pups emerge as small replicas of their parent, complete with their hedgetrimmer-style rostrums, ready to swim away. Fishes that carry their young and give birth to one or more developed juveniles in this way are called ovoviviparous.

The commentary is clear and informative, the research potential for this vulnerable species is considerable, and if you have a soul and a spare 3 minutes, you really should watch this!

This unique recorded event took place last December. The joint research trip to Andros by the FSU Coastal and Marine Lab and NOAA was led by Dr. Dean Grubbs. The purpose of the research was to discover evidence of any exchange between the sawfish population in the U.S. and Bahamas. You can find out more about the research and scientists at the FSUCML website. And if you want to get involved and take part in an expedition, click GET INTO THE FIELD

RH SAWFISH PAGE – pics, facts and vids, including how the rostrum is used in feeding

* ‘Awful’ had the same meaning as awesome, historically – cf dreadful. It did not mean a bad film or a lousy restaurant.

This recent photograph by Adam Rees of Scuba Works was taken in Florida waters. It is one of an astonishing school of 8 smalltooth sawfish, the largest group Adam has ever encountered.