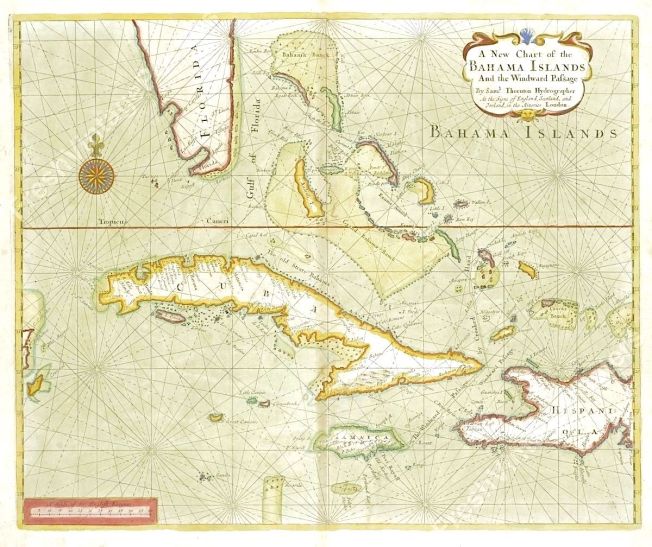 In the Old World, 1702 was a turbulent year politically, royally, and militarily. Treaties made were broken; new treaties were made. Queen Anne succeeded to the throne after William III died of complications after falling off his horse. Anne went on to have 17 children, any one of whom would have secured the succession, but the extraordinary and sad fact is that none survived beyond childhood. In the New World, English troops were abroad, attacking St Augustine in (then-Spanish) Florida.

Meanwhile in the world of cartography, the development of mapping continued apace with the Dutch retaining their pre-eminence, and the French and British making important contributions. Which brings me to Samuel Thornton, hydrographer, and his mapping ways. He was the son of the more famous cartographer, John Thornton, considered the principal English chart-maker of the late c17. As his father aged, a degree of uncertainty seems to have crept in over the authorship of Thornton maps. It is clear that after John’s death in 1708, Samuel took over the business and reissued maps under his own name, sometimes with little alteration other than the name in the cartouche. However there was possibly a ‘grey area’ for a few years before, when the same practice applied.

Samuel Thornton’s ‘…New Chart of the Bahama Islands and the Windward Pafsage (sic)’ is thought originally to date from c1702, when presumably the enjoyably colourful Cartouche (above) in fact bore his father’s name. The map covers an extensive geographical area besides the Bahamas, with the Florida coastline revealed as remarkably unpopulated. Zeroing in on the northern Bahamas (and as is usual with historic maps), certain features stand out, not least with spelling. Andros was written Androfs (sic). The Bahama Banck (sic) is shown to extend quite a long way north of Abbaco (sic) and Grand Bahama (shown as Bahama I). And as noted in earlier posts relating to Abaco’s history (see links below), ‘Hole in the Rock’ (ie Wall) is the only mainland location marked. This was not because there was any sizeable settlement there, but because for at least a century beforehand, Abaco’s most notable topographic feature was a significant and instantly recognisable navigation marker for shipping at the southern end of the island.

One problem with Samuel Thornton’s reissues of his father’s maps was that flaws an original map from which a reproduction was derived went uncorrected. For example if you look at the header image of the full map, there’s a dark band right down the centre of the map, which persisted in later versions. More importantly, there was probably little or no correction of errors that new expeditions in the area might have revealed. Be that as it may, the Thornton map plays a significant role in the mapping of the Bahama Islands and beyond, and marks the start of an increasing sophistication as the new century progressed.

MAPPING ABACO Bahamas and Florida in the c17

MAPPING ABACO A journey back to c18

A HISTORY OF HOLE-IN-THE-WALL IN MAPS