THE STORY SO FAR

In early December a SpaceX (prop. E. Musk) Falcon 9 rocket was launched from Cape Canaveral. As it sped off purposefully into Space, the usual associated bits and pieces were jettisoned to fall with great precision into (a) open ocean and (b) a part where shipping was fortuitously absent. In due course (very quickly in fact), chunks of rocket debris turned up on the peaceful shores of Abaco. This is not unheard of: for example in 2012 we had a 12-foot fairing from the Curiosity Mars launch on the beach at Delphi (HERE); and in 2015 other space debris was found on Elbow Cay: 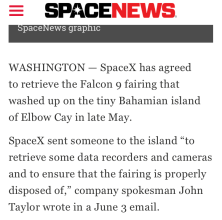 The latest space-debris festival on Abaco’s shorelines in December was first discovered at Bahama Palm Shores. ID was established from the partial red SpaceX / Musk logo visible in the below. The new arrival added to the ongoing excitement there of a huge 50′ and (sadly) dead sperm washing back onto the beach in a state of unattractive and ‘stay-upwind-at-all-costs’  decomposition… 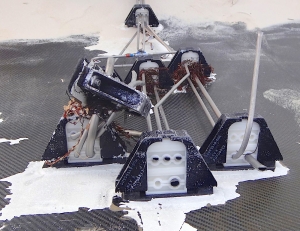 This was quickly followed by a report from Tahiti Beach, Elbow Cay. You can read the details of these 2 events as follows: BPS HERE and Elbow Cay HERE. 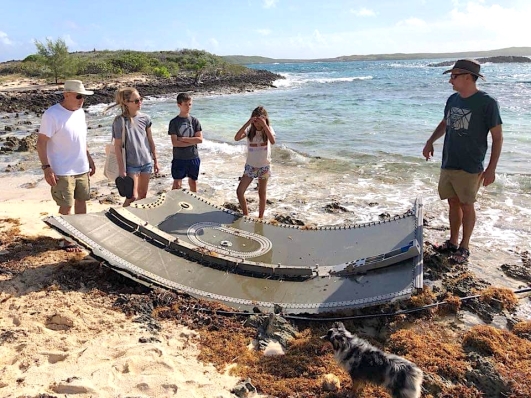 As I mentioned in the Tahiti Beach post, a report from the west side of Abaco had just reached me from Charlotte Dunn, Director of the Bahamas Marine Mammal Research Organisation (BMMRO) at Sandy Point, Abaco. This was a surprising location because – with space-junk washing up on both sides of Abaco – an inference might be that the ‘drop’ area for nose-cones, fairings and the like might be somewhat wider than expected. Possibly wide enough to include a direct hit on land? Anyway, as promised, Charlotte has now had time to take some photos of Sandy Point’s involvement in the saga. 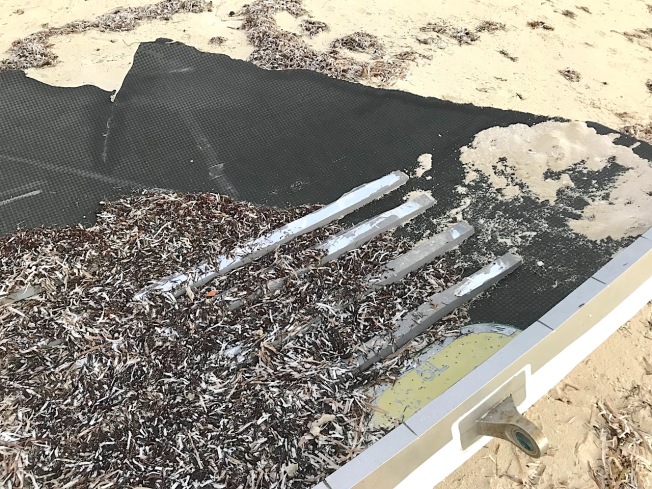 The top photo shows a long strip of space rocket, curving at one end. It’s obviously part of a larger part that was ejected after launch. In the Falcon 9 image below (note the logo matching the BPS part), the eye is drawn to the booster rocket fairings. Maybe it’s part of one of those. It’s not my area, so correction is invited, and probably welcomed if polite…

A SpaceX Falcon 9 rocket on the launch pad

WHERE ARE THE LOCATIONS IN RELATION TO EACH OTHER?

WILL THERE BE ANYMORE SPACE TREASURE WASHED UP ON ABACO?

With 3 sites now involved, and on both sides of the island, it seems very likely that more has washed up. However, there is so much unfrequented or inaccessible shoreline on Abaco that there may be no further reports from this launch. High tides will most likely take debris back out to sea and relocate it elsewhere.. We’ll have to see…

CAN I ‘BORROW’ A BIT OF ROCKET TO JOIN MY SEA GLASS COLLECTION?

That’s a very interesting question, thank you for raising it. We are in a grey area here, somewhere between things that (seem to) have been thrown away / discarded / abandoned by their owner (res nullius), which may be fair game; and items where it is safest to assume that – despite the careless and indeed haphazard nature of their ‘loss’ – they might still be of value, use or significance to the owner. Each case has to be looked at on its merits; overall, I suspect Mr Musk would like his parts back; alternatively that he may not want anyone else to take possession of them… He is litigious. Your call! In the UK people are bidden to take lost property to a Police Station. You could try that. 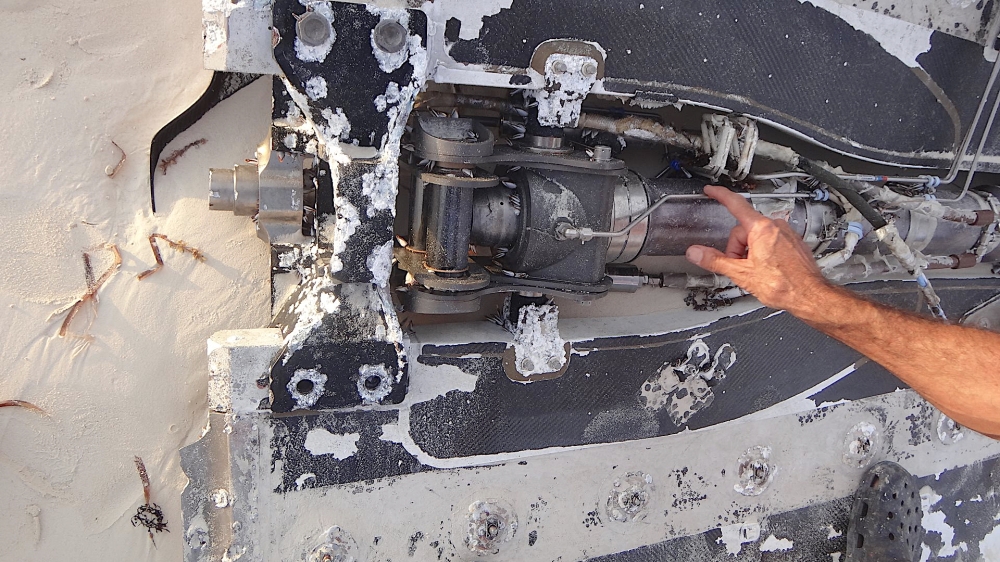 WHAT OTHER SPACE-X FLIGHTS OVER / NEAR ABACO ARE PLANNED?

Thanks to Jack Bowers who sent me the link to the SpaceX schedule. Here are some recent completed missions. Note the top one, a launch on 11th January. Now check your local beach…

DO YOU HAVE ONE OF YOUR MUSICAL DIGRESSIONS?

Having seasonally gifted Bahamas Palm Shores the benefit of the debris from his recent Falcon 9 rocket launch (see last post from BPS HERE) it turns out that Mr EM has spread his munificence rather wider on Abaco. And there may be still more to come.

I pressed the ‘publish’ button re BPS a couple of days ago. Within hours, a further report was posted on the resulting FB thread. From Elbow Cay came the news that more space-related debris had washed up on beautiful Tahiti Beach. Mary McHenry posted 2 photos of a strange chunk of junk. I think we can reasonably assume that is from a rocket; and the timing is consistent with it being related to EM and his recent SpaceX program activities. 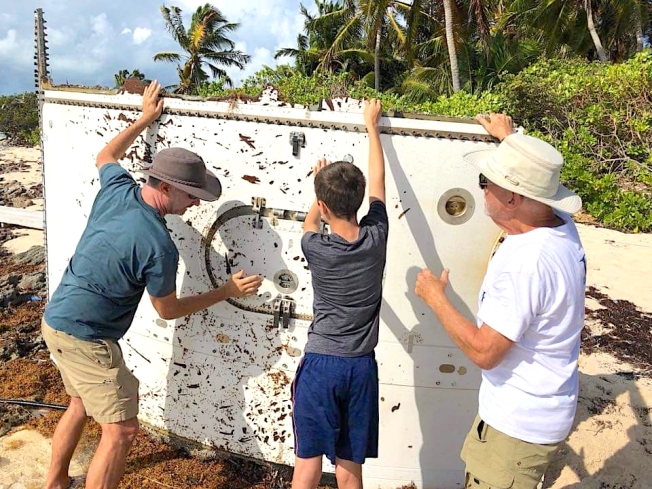 Mary’s photos show both sides of the gently curved item. I’ve no idea what part this is or what it does, but I hope that we can find out. It looks like a bit of fuselage, and presumably it is one of the parts that detach in the aftermath of a launch and falls back to earth to make an attractive and thought-provoking addition to the ocean and to whichever beach it turns up on. 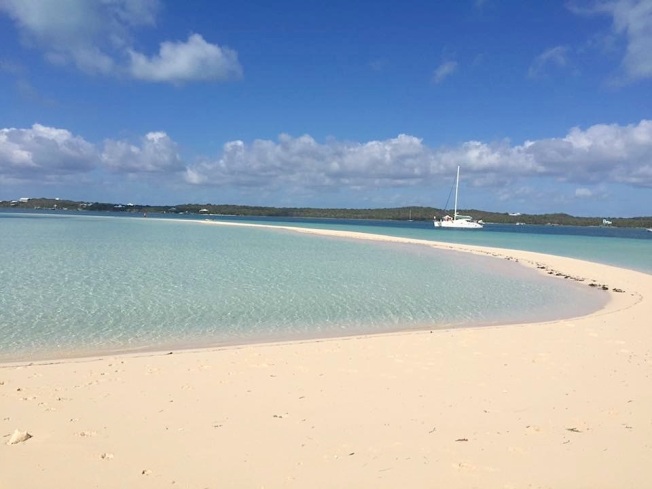 In this case, it was Tahiti Beach (above), one of the most beautiful locations on Abaco. It is a beach in which I have a particular interest, because each year rare piping plovers hang out there in singles and pairs. It doesn’t seem to be their home, more like a little short-break destination for some quality foraging away from their usual stamping grounds. And to check out any space-based embellishments, of course. 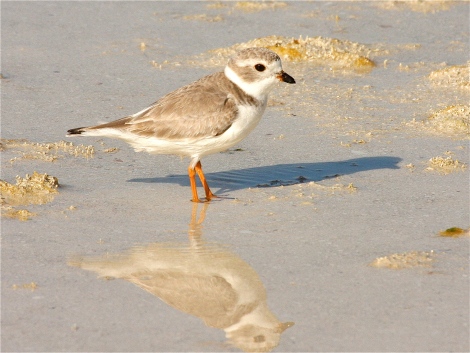 A SpaceX Falcon 9 rocket on the launch pad 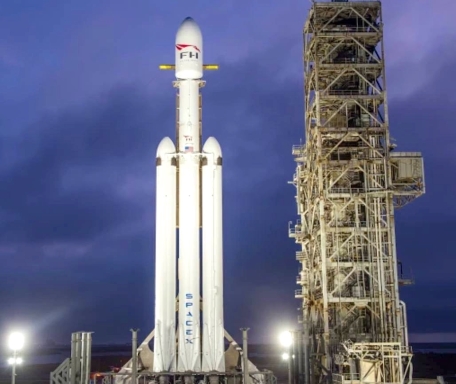 ANY MORE ASTONISHING ABACO SPACE HQ REVELATIONS IN THE PIPELINE?

Yes indeed. Within a few more hours I was contacted by Charlotte Dunn, Director of the Bahamas Marine Mammal Research Organisation (BMMRO) at Sandy Point, Abaco. They too had found some space stuff on their beach. This is interesting because, whereas Bahama Palm Shores and Tahiti Beach are on the east side of mainland Abaco, Sandy Point is on the west side. Somehow the debris seems to have spread surprisingly far and wide to both sides of Abaco

I’m waiting for some photos from Charlotte, then I’ll post Part 3 of what may be quite a long sequence. I say that in particular, because yesterday day there was news that another SpaceX Falcon 9 had been launched from Cape Canaveral carrying military hardware into space. I think we can guess where some of the components of this enterprise may wash up – those large pieces that detach over the ocean as the rocket ascends through the earth’s atmosphere into space. Keep your beach-combing shoes** handy… and a camera, maybe. 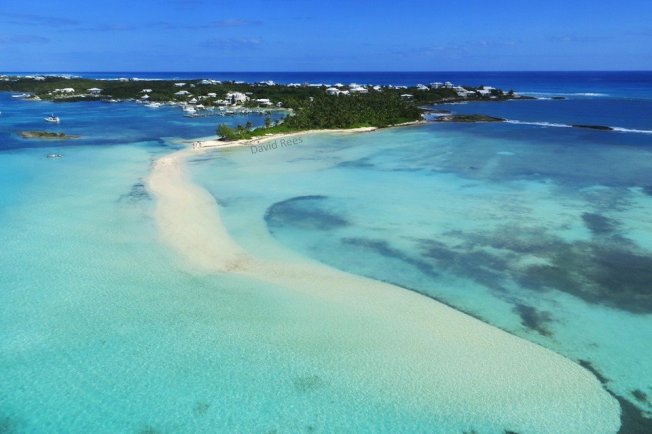 ** Mmm. I don’t think these are a ‘thing’ at all; in this context I probably just mean ‘feet’

FINALLY, A VERY HAPPY XMAS TO ALL THOSE THAT TOLERATE THIS BLOG AND KINDLY COME BACK FOR MORE 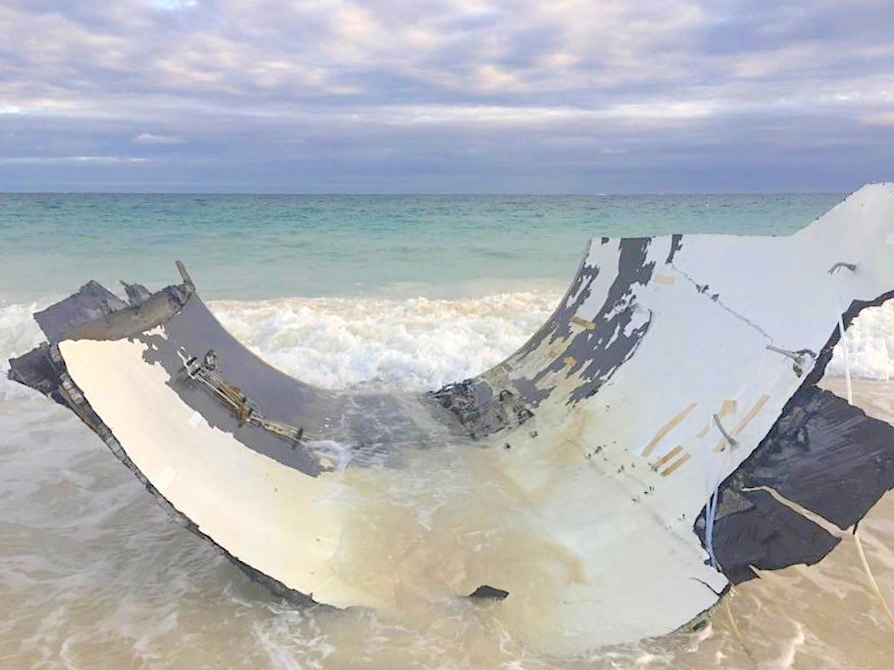 SPACE DEBRIS ON ABACO: YES, IT IS ROCKET SCIENCE

December has seen two remarkable events on Abaco. First, a huge dead sperm whale (estimated 50′ long) washed up at Bahama Palm Shores. Sharks had already had a go at it, and it was beginning to putrefy. An autopsy was unable to determine the cause of death (ship-strike is presumably a contender). It continued to decompose on the shoreline, becoming extremely… well, best kept at a distance. And upwind of it. I’ll post about the sad end of this magnificent creature – the largest marine mammal in the Bahamas – in a couple of weeks, after the festivities at Rolling Harbour Towers have calmed down.

STOP PRESS 🚀 you haven’t even reached the rocket part of this yet, but just to say that a few hours after posting this article, other reports of bits of Mr Musk’s rocket debris washed up on beaches are coming in  – Tahiti Beach EC, and just now from BMMRO at Sandy Point. I’ll update tomorrow. 🚀 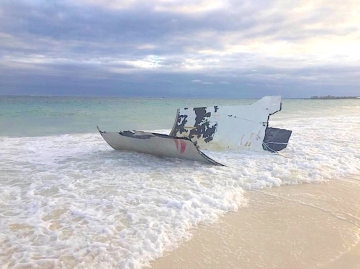 The second big news event for South Abaco was the discovery of a massive piece of (formerly) airborne debris drifting onto the BPS beach. Everyone was hoping the item wasn’t part of a plane fuselage, as it initially appeared to be. From the initial photos it looked to me like something from a rocket launch, maybe part of a booster rocket. It reminded me of the 12 foot part of a booster rocket fairing from the Atlas 5 rocket which launched Curiosity on its Mars mission, that washed up on the Delphi beach in early 2012. The men in black eventually came to reclaim it… More on that HERE 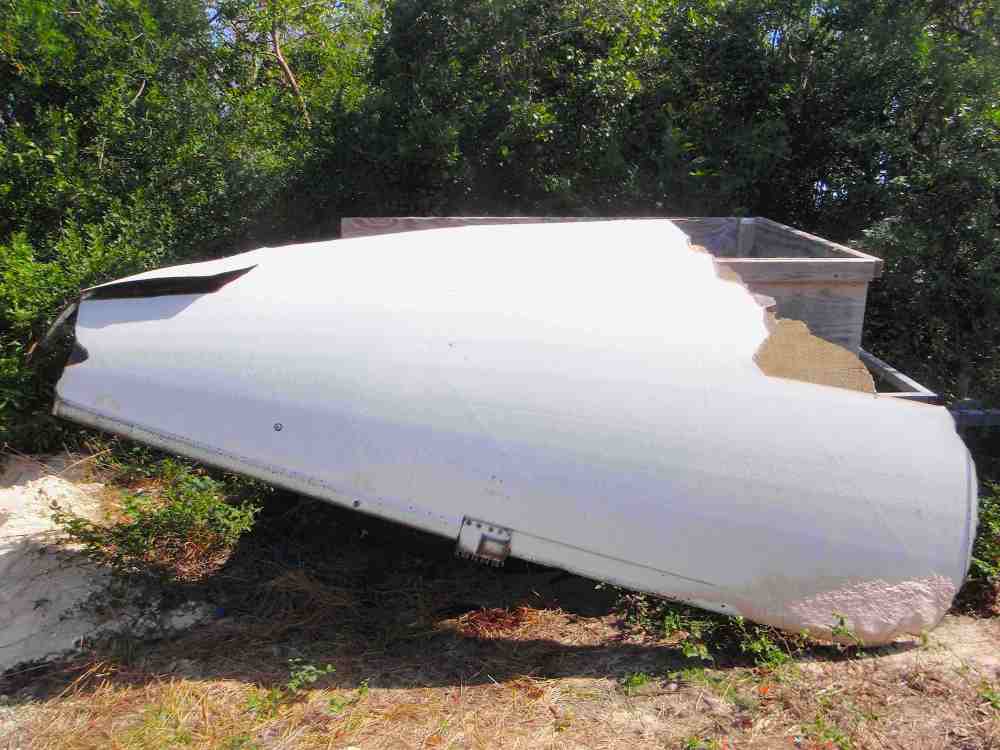 THIS REALLY IS ROCKET SCIENCE THEN?

Quite soon the mystery of the object’s purpose and origin began to get clearer. Luc Lavallee was quick to recognise the red external markings as matching Elon Musk’s logo, as used by his SpaceX venture. Events moved quickly. Contact with Musk’s operation confirmed that this was indeed “one of theirs”, a part from the latest launch a few days before.

SO WHAT ON EARTH* WAS THIS CHUNK OF SPACE DEBRIS?

In the end the item was identified as part of the shroud from a Falcon 9 rocket. There was plenty of opportunity to take a good look at some of the workings. There’s potential here for some quality beach-combing (who would not want an ‘Actuator Latch Right’ rod in their living room?). There are interesting legal considerations in this type of situation… [Worried reader: please, no, I beg you]. Moving on, here’s a selection of rocket bits for contemplation.

More info was gathered, including the discovery of an astounding video from a camera fastened to a Falcon 9 rocket’s payload fairing, showing the nose cone spinning through space after its separation on a satellite launch earlier this year.

WHAT DOES A ROCKET SHROUD DO?

The nose shroud shields satellites during final preflight preparations and the early stages of launch. Once the rocket reaches space — an altitude above 100 kms / 62 miles — it jettisons the payload fairing to fall back into the ocean. The Falcon 9’s fairing is released in two halves, like a clamshell.

* This is the sort of occasion when people write ‘no pun intended’, though in fact they generally intend one, just rather a feeble one. Like mine, in fact.