Over the last couple of weeks or so I have been getting a lot of hits for Shark Attack information. There have been 2 or 3 recent incidents including a tragic (and very rare) death in Maine, which may well account for this. The Shark Attack details I have accumulated and posted over the years are buried in an historical sub-sub-page, so to make things easier I have rechecked and updated the latest data resources and their links, and put them in a mainstream post. This is it.

This resource is the portal to a mass of current, recent, and historical data, presented with authority and clarity. It provides undoubtedly the most comprehensive and accessible global shark-incident data of all.

Last year I included informative screen-shots taken from this site. For now I am confining the information to the most useful direct links. More work for the reader, perhaps, but also a better chance to explore and understand the hows, whens and wherefores of shark-related incidents – and how best to avoid the situation in the first place. 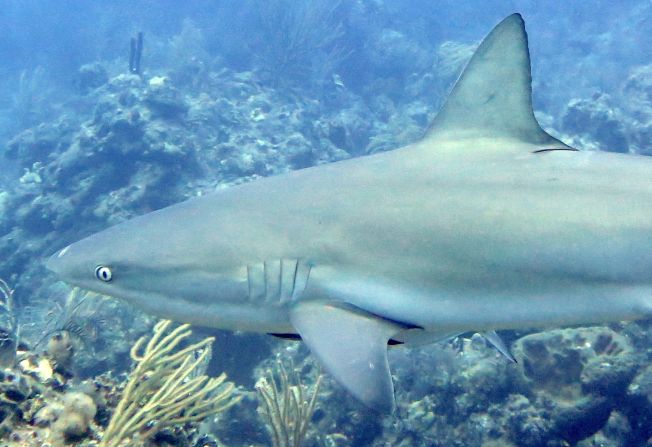 “The 2019 worldwide total of 64 confirmed unprovoked cases were lower than the most recent five-year (2014-2018) average of 82 incidents annually. There were five fatal attacks this year, two of which were confirmed to be unprovoked. This number is in line with the annual global average of four fatalities per year“ 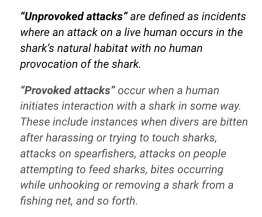 What are the Odds?

For anyone thinking of entering waters where sharks live – eg scuba divers, spear-fishers, swimmers, boaters – with relatively little experience or knowledge, these links will be incredibly useful. Local knowledge is well worth having as well. A young friend of ours, an intern on Abaco, was warned against spearfishing at a particular location: “Fish there, you’ll get ate”. He did. He very nearly was.

“Humans are not on the menu of sharks. Sharks bite humans out of curiosity or to defend themselves” 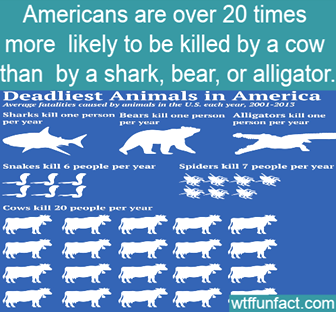 SHARKS! APEX PREDATORS IN THE BAHAMAS

Immersion in current affairs these days brings inevitable acquaintance with sharks of various kinds, and all best avoided. Let’s have a look the real thing, the apex marine predators that in the Bahamas are all around you once you leave the safety of the shore. I haven’t featured them for ages, and it’s always a pleasure – a slight thrill, even. 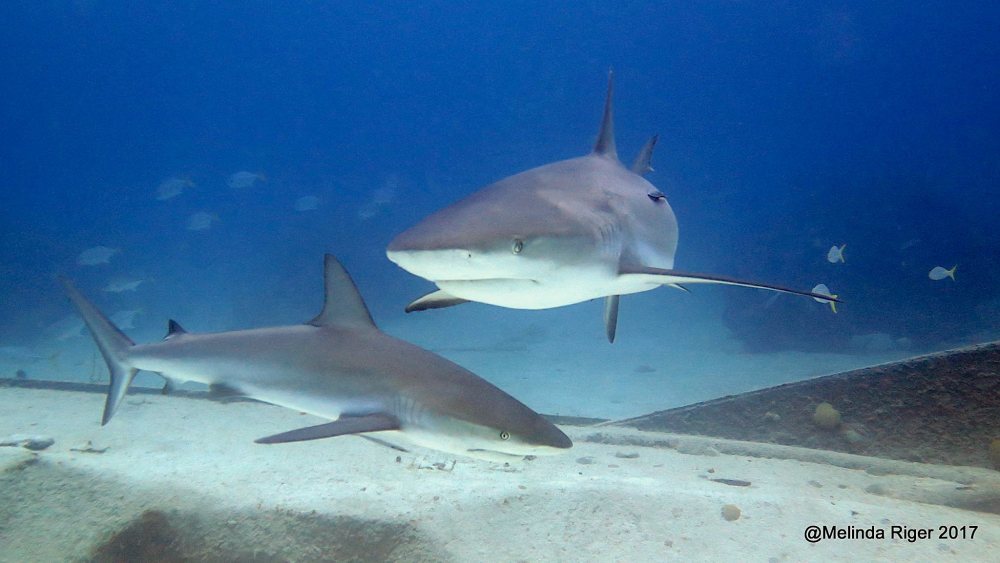 I don’t do scuba, indeed my swimming would easily be outclassed by a competent four-year old. But I see these creatures when I’m out fishing; or as they hang in the breaking waves off the Delphi beach, watching intently for a meal. 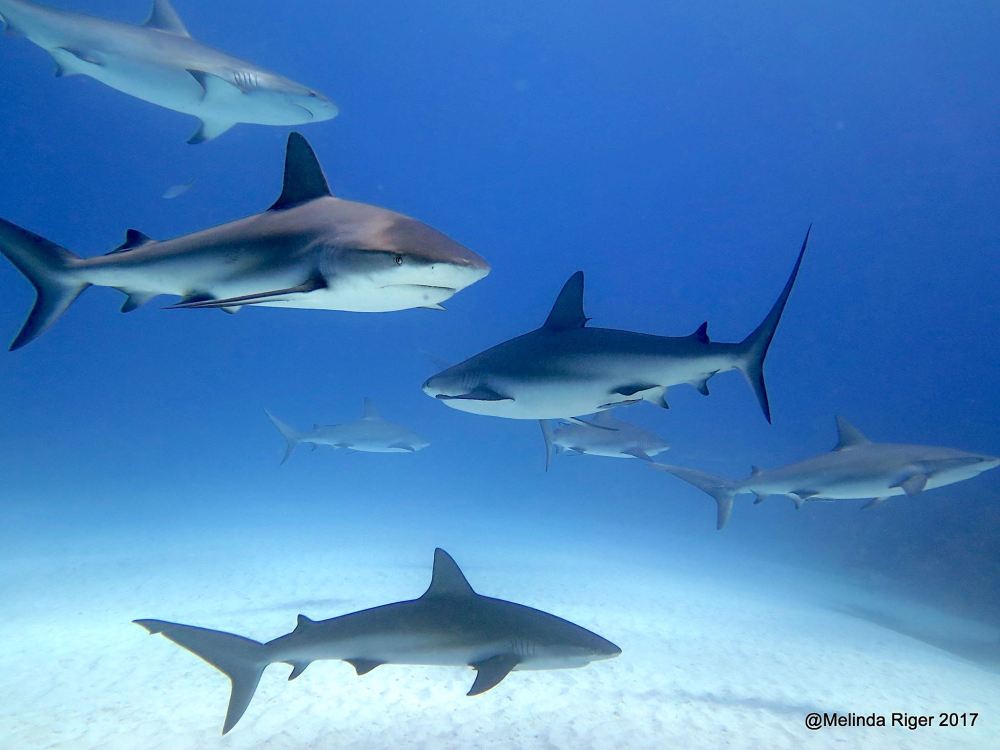 We watch them (and stingrays) from the balcony as they lazily make their way round the margins of the wide bay, from little ‘uns to (recently) a huge bull shark. We watch as, when someone is in the water, they change course slightly to pass by them. So far, anyway…

The one that got away… (a sad sight)

I once took a rather primitive underwater camera with me while snorkelling in Fowl Cays National Park. This was several years ago, when I believed a cheap 2mb camera might turn me into one of the Blue Planet team. I was wrong. The shark I saw, apparently some 20 miles away (when I examined the image) – well, that’s its tail, top left…

Just to look at these images is to understand that when you are in the sea, you are in the sharks’ environment. They are the masters of it. They have their rules, and they are not much interested in you… unless you break them. Or so the theory goes. 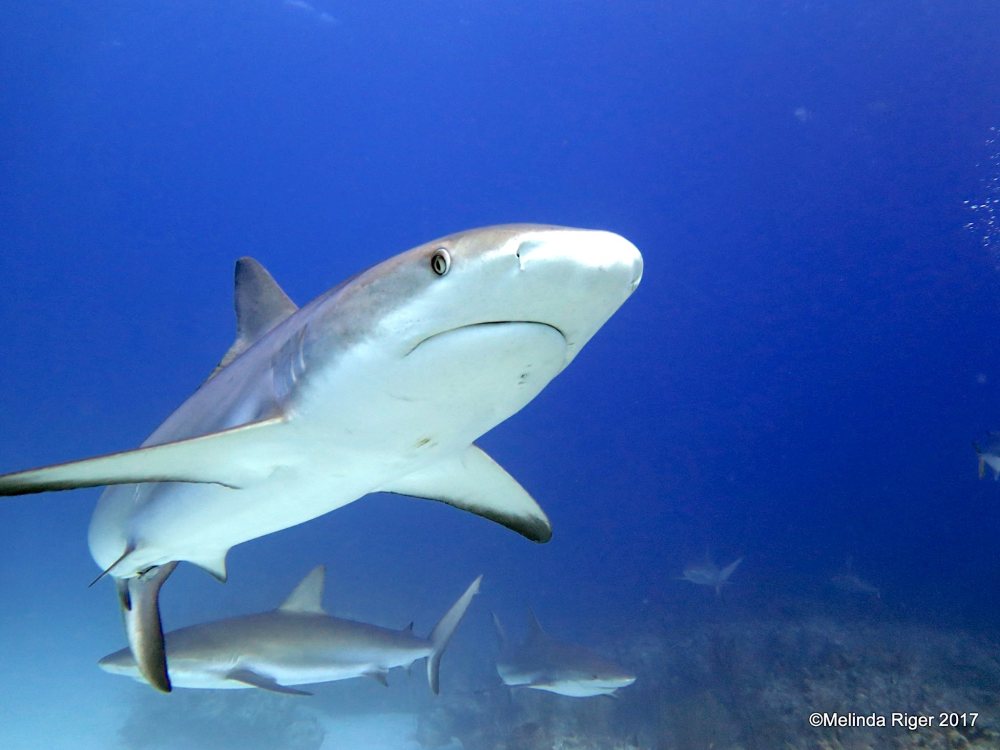 This fine shark below exemplifies the power and the menace of the shark. A creature to be admired, but also to be respected. 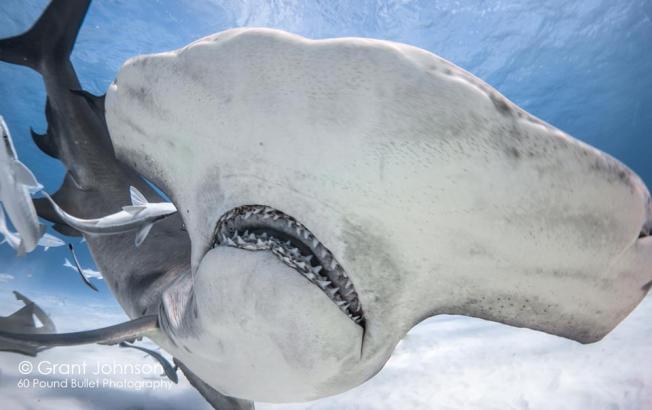 HAMMERHEAD SHARKS: UP CLOSE AND PERSONAL…

Of all the words that have been devalued and diminished by overuse over the last decade, ‘AWESOME!!!’ must rank high in the top 10. Maybe it’s even made it to number 1. Awesome! Even in the wildest reaches of hyperbole, the offer of a Kalik can never truly be awesome. Nor can a kind and delightful gift. There’s no need to add more examples, because the photos that follow show something that really is awesome in it’s true meaning: the giant hammerhead shark at close – and very close – quarters. Grant Johnson takes astounding wildlife photos in Bimini and far beyond. Take the time to have a look at his page ’60 POUND BULLET’. Now let’s move on to ‘awesomely awesome…’ 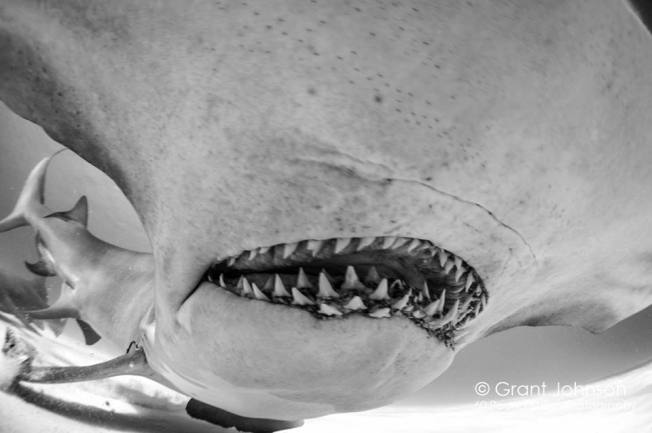 And yes, there are Hammerheads in Abaco waters. I have occasionally seen small- to medium-sized ones while fishing out on the Marls. In several of the images above, you can see those strange creatures, Remoras, that attach themselves to sharks by suction and hitch a ride. You can read more about them and learn why they do such a foolish thing HERE.

Credits: All photos, Grant Johnson / 60 Pound Bullet, with many thanks for use permission

Sharks: apex predators of the deep. Also, kind to the suckers who hang out with them – REMORAS. In the header image you can see a remora hitching a ride on the shark’s back.

Sharks also seem to enjoy, or at least tolerate, the company of tiny fish – tiddlers so small they don’t even count as a snack or even a canapé. 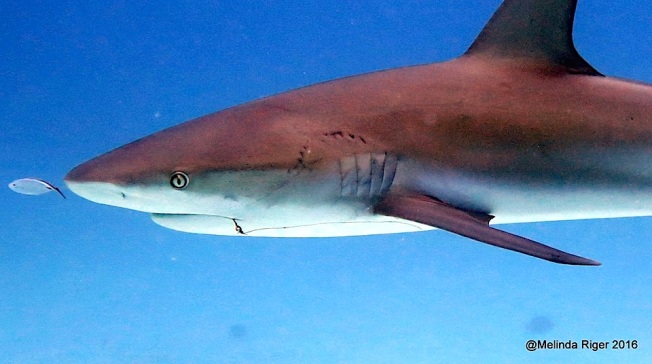 Check out the shark-jaw shaped wound on the shark just above. And the rather more dramatic ones on the two sharks below. Shark sex can be a rough old game, and sometimes results in moderate or even severe injury to one participant – or perhaps to both.

“ONE IS CALLED LUCY…”: SWIMMING WITH SHARKS

From time to time I wonder about the naming of animals. I know about the problems that can arise when people name their chickens Henny, Penny, Denny & Lenny, and the time comes to (please look away now). And how a slavering dog coming towards you (not on a lead) that the owner calls ‘Tyson’ or ‘Killer’ is possibly one to cross the street for. And that the owner of a cat called ‘The Reverend Wenceslas Muff’ (Sir Roy Strong, in fact) may not take kindly to you referring to it facetiously as ‘Puddy-tat’. But does it make things any better to know that the shark that is eyeballing you is called Lucy? I don’t know the names of the others, but I am sure they would all like to be introduced… 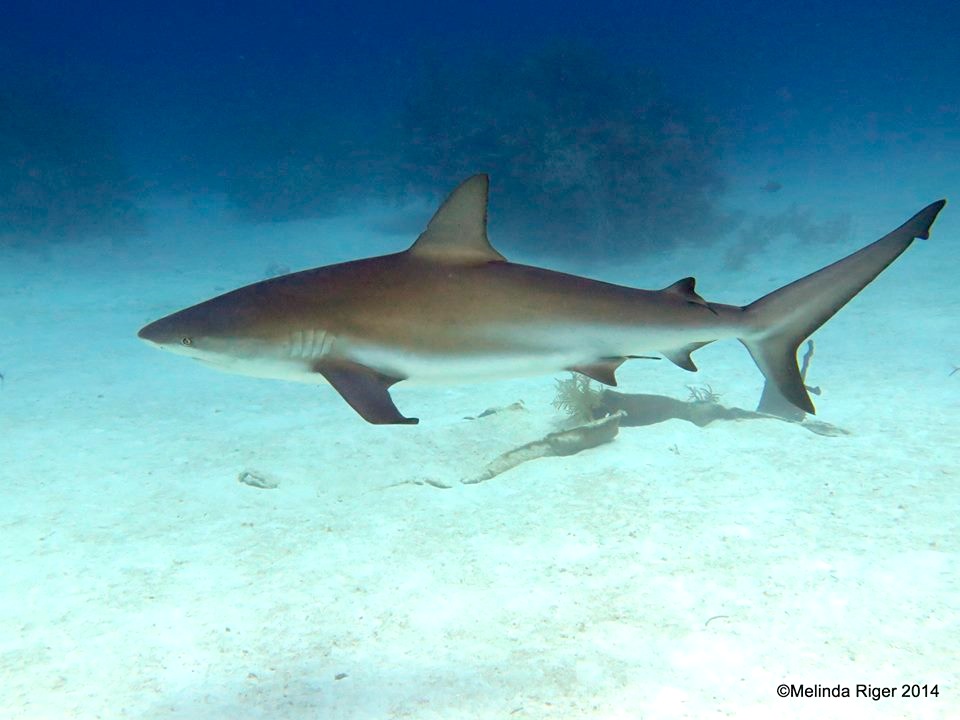 REMORAS Some of the photos show a strange creature attached to the underside of the shark. For more info about these weird shark passengers, and some great images, click HERE

All the fabulous photographs above were taken by Melinda Riger and Virginia Cooper of Grand Bahama Scuba, on whom I rely entirely for subaqueous material, being a pathetic swimmer, a gnarly ancient, and a certified scaredy-cat (‘highly commended’). My thanks as always to them for use permission

SHARKS! ALL YOU NEED (OR WANT) TO KNOW IN ONE SMALL BOOK

THE IDENTIFICATION, BEHAVIOUR & NATURAL HISTORY OF THE SHARKS OF FLORIDA, THE BAHAMAS, THE CARIBBEAN & GULF OF MEXICO

Occasionally I review books, apps, ‘meeja’ and so on, of general relevance to Abaco wildlife and ecology. You can find all this under the heading BOOKS ETC and its drop-down sub-menus. You’ll see comparative recommendations, mostly positive, with some frankly snidey comments on a few things not to waste your ‘hard-earned’ on.

Here’s a book I bought on @m@z@n for a few coins + p&p (less than $5 total) just to see what it might have to offer. The answer is, a great deal. It’s not the book for those who want a detailed exploration the intricate mesopathy of selachimorphic exo-cartilege, if such a thing exists. But it has a mass of useful information, brief but helpful identification pages for many different shark species, and good illustrations, all compressed into a slim tome.

Although this book was published in 2000, sharks haven’t changed noticeably since then, so the contents still hold good. Here are a few pages to give an idea of how simple yet informative this book is.

A tour round a shark’s ‘bits’ 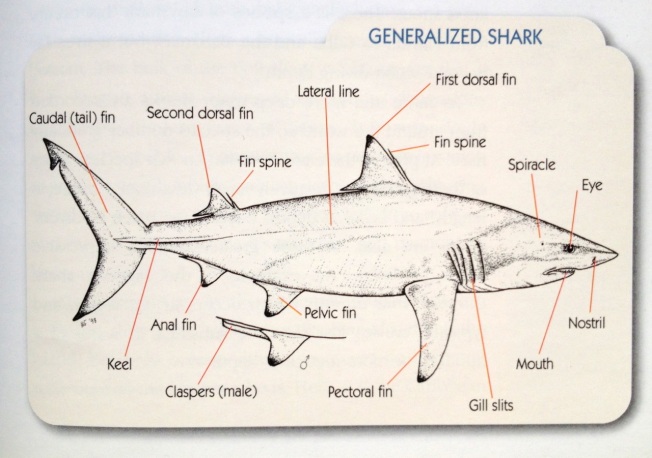 The Contents page gives a very clear idea of the scope of the book. Pages 34 to 54 are of particular interest for anyone intending to dive, spearfish, snorkel or indeed take a dip.

The entries for the Blacktip Shark and the Lemon Shark. Each entry features a useful range map, and an even more useful ‘potential danger rating’ for each species. It’s worth remembering, however, that there are sharks worldwide, and they all have teeth. Thousands of people dive and swim with many of the species every day in complete safety. There are simply some does and don’ts, mostly completely obvious, that will make the difference between enjoying their company (and they, yours); and pushing your luck with a wild creature when you have intruded into its habitat… 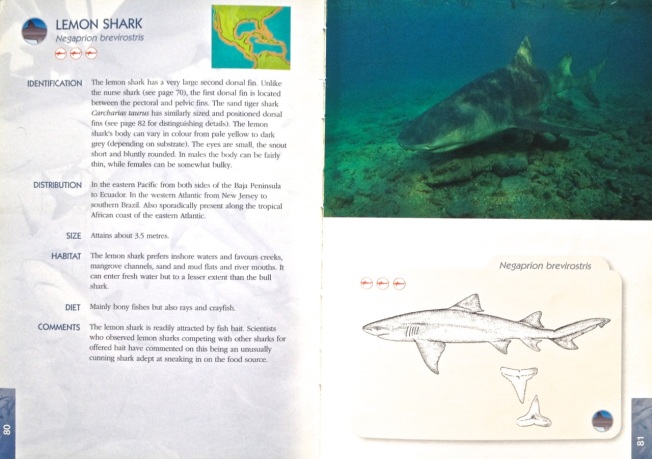 This page interested me in the light of the chumming debate. Plenty of basic common sense here. 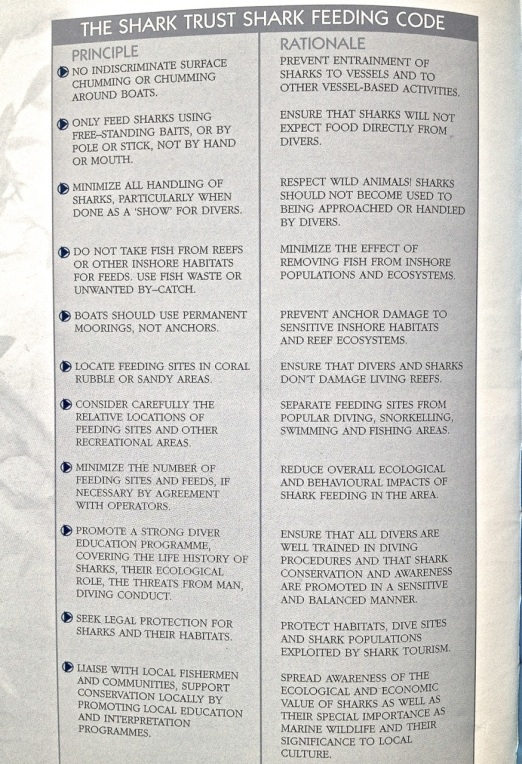 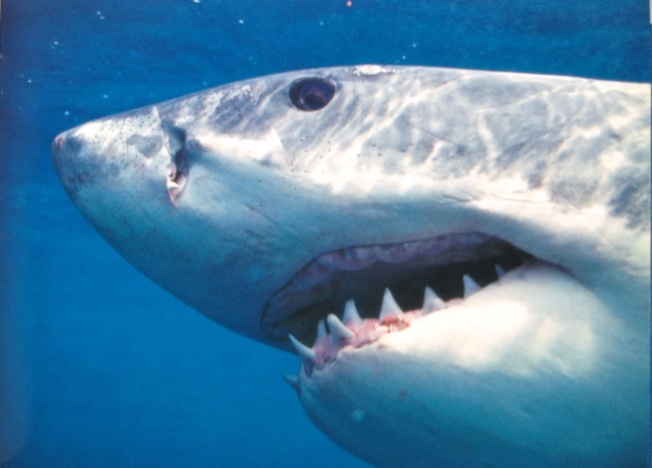 More shark information and some amazing images can be found HERE .

As I wrote elsewhere: “Take comfort from the fact that no fatalities and fewer than 10 injuries from shark attacks have been recorded in Abaco waters for over 250 years (since 1749)… By way of comparison, in the last 150 years there have been 36 recorded shark attacks in the Mediterranean, of which 18 have been fatal… Since 1845 there have been a number of shark attacks in British waters, with one fatality.  There were two more fatalities in an incident in 1956 , but this was an ‘own-goal’ arising from an attempt to blow up a shark with dynamite. It can hardly be blamed on the shark.

CONCLUSION You are statistically far safer to spend 250 years swimming off Abaco than spending 3 years stroking a cat in Manchester. Or Swansea.”

…TO GO BACK IN THE WATER… DER DE DER DE…

…along came some friendly sharks to swim with… and to photograph

Take comfort from the fact that no fatalities and only half a dozen injuries from shark attacks have been recorded in Abaco waters for over 250 years (since 1749). Risk assessors and the nervous, take note. 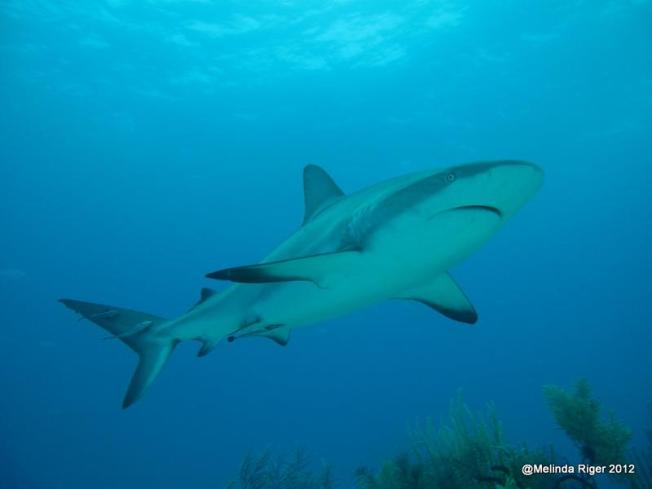 By way of comparison, in the last 150 years there have been 36 recorded shark attacks in the Mediterranean, of which 18 have been fatal…

Since 1845 there have been a number of shark attacks in British waters, with one fatality.  There were two more fatalities in an incident in 1956 , but this was an ‘own-goal’ arising from an attempt to blow up a shark with dynamite. It can hardly be blamed on the shark. 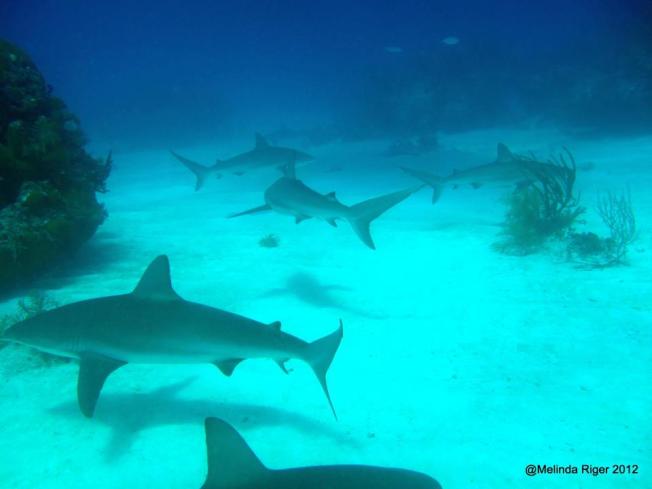 CONCLUSION You are statistically far safer to spend 250 years swimming off Abaco than spending 3 years stroking a cat in Manchester. Or Swansea.

All fantastic images by Melinda Riger of Grand Bahama Scuba who swims with sharks all the time!